For Immediate Release
Office of the Press Secretary
August 15, 2004

REMARKS BY THE PRESIDENT

TO THE TRAVEL POOL

THE PRESIDENT: You know the job of the federal government and the state government is to surge resources as quickly as possible to disaster areas. And that's exactly what's happening now. We choppered over and saw the devastation of this area. A lot of people's lives are turned upside down. We've got ice and water moving in, trailers for people to live in are moving in. The state is providing security so that people can have peace of mind that their neighborhoods will be safe. There's a lot of compassion moving in the area, the Red Cross is here. 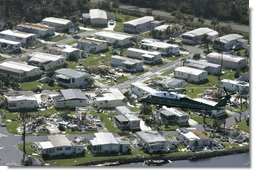 What I'm telling you is that there's a lot of help moving into this part of the world -- it's going to take a while to rebuild it. But the government's job is to help people help rebuild their lives, and that's what's happening.

I'll answer some questions, if you've got some.

Q Can you tell us about some of the people who you spoke with and what they told you?

THE PRESIDENT: Well, I've got -- you know, these good folks here, this is this man's house here. His parents were uprooted from where they were living. They came here to spend the night. And that's what you're beginning to see. You're beginning to see neighbors helping neighbors. A lot of people who have been dislocated are staying with a friend or a neighbor. You know, out of these catastrophes the spirit of America really shines, and that spirit is neighbor helping neighbor. So that's the lesson here.

The fellow down the street came out okay; he had taken precautions necessary. Nearly everybody here that I've talked to had evacuated, as the state asked them to do and, therefore, the loss of life was minimized -- still, too many people lost their lives, but, nevertheless, it was not as significant as it could have been. We're here, obviously, in a residential neighborhood where people's lives have been destroyed. They're beginning to worry about insurance claims and the state is organized to handle insurance claims. The key is just to make sure that they expedite the services which are available as quickly as possible.

Q There was some consternation after Andrew that the federal aid didn't arrive soon enough. Can you promise that there will be a more expeditious response this time?

THE PRESIDENT: It's happening now --

THE PRESIDENT: Hold up for a second. We're moving a lot of aid very quickly and, again, you can ask the governor whether or not he's satisfied with how fast the aid is moving. All I can tell you is that FEMA was on the ground yesterday morning and there's a lot of supplies surging this way. 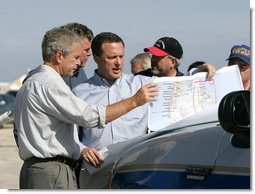 THE PRESIDENT: Not yet. Jeb estimated billions. We'll see.

Q Mr. President, some people are going to say that there's a political component to your rapid visit to Florida.

THE PRESIDENT: Yes, and if I didn't come they would have said, he should have been here more rapidly.

Q What about what happened in '92, with Hurricane Andrew? That was obviously in August of a presidential --

THE PRESIDENT: That was then, this is now. And the government is set up to respond very quickly and we are.

Q Was there a lesson learned back then, though?

THE PRESIDENT: The lesson is, respond quickly. And we are responding quickly. And we're surging equipment. And the coordination between the federal government and the state government is excellent. And the Homeland Security Department is doing its job. FEMA Director Brown is doing an excellent job. You can talk to the governor, he can give you a sense from the state perspective. But from the federal perspective, I was notified that they're going to move as quickly as possible, and they are. A lot of stuff is coming.