For Immediate Release
Office of the Press Secretary
August 10, 2004

THE PRESIDENT: Thank you all for coming. I'm pleased to announce my decision to nominate Congressman Porter Goss as the next Director of the Central Intelligence Agency. Porter Goss is a leader with strong experience in intelligence and in the fight against terrorism. He knows the CIA inside and out. He's the right man to lead this important agency at this critical moment in our nation's history. 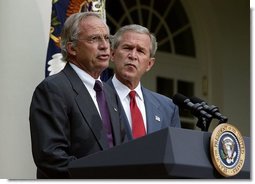 The work of the CIA is vital to our security. America faces determined enemies who plan in many nations, send trained killers to live among us, and attack without warning. This threat is unprecedented, and to stop them from killing our citizens, we must have the best intelligence possible. The men and women of the CIA must penetrate closed societies and secretive organizations. They must overcome challenges of language and culture and learn things that our adversaries don't want us to know. Because their work is secret, the men and women of the CIA receive little recognition, but they're protecting our country every day.

Since September the 11th, our intelligence professionals have worked with great determination to stop another attack on America, and our country is grateful.

Director George Tenet and acting Director John McLaughlin have served our nation with distinction and honor. And now, with the agreement of the U.S. Senate, the CIA will have another strong leader in Porter Goss.

I've given Porter an essential mission to lead the agency for the challenges and threats of a dangerous new century. He is well prepared for this mission. Porter Goss brings a broad experience to this critical job. He's a former Army intelligence officer with a decade of experience in the CIA's clandestine service. He knows the agency, and he knows what is needed to strengthen it. He understands the importance of human intelligence. He was a CIA field officer on two continents. He'll make sure that the men and women of the CIA have the capabilities and skills they need to penetrate the hard targets and denied areas, and to get to know the enemy first hand. He also knows the importance of investing in technologies that allow us to look and listen better. And he will work to ensure the agency remains on the cutting edge of technological change.

As Chairman of the House Select Committee on Intelligence since 1997, and as a member on the Commission on the Roles and Capabilities of the United States Intelligence Community, he has been a leading voice on intelligence and national security and terrorism. He's been a force for positive change. His experience on Capitol Hill will serve him well at the CIA, because he's respected on both sides of the aisle, and because he understands the important role Congress must play in the effort to improve our nation's intelligence capabilities.

Over 15 years of service, Porter Goss has built a reputation as a reformer. He'll be a reformer at the Central Intelligence Agency. I look forward to his counsel and his judgments as to how best to implement broader intel reform, including the recommendations of the 9/11 Commission. 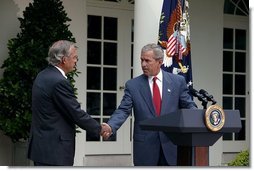 I think every American knows the importance of the best possible intelligence we can get to our decision- makers. It is vital, as the President has well said. What many Americans don't realize is that we've got an awful lot of people around the globe doing very, very hard work -- long hours in dangerous situations. The essence of our intelligence capability is people. And we have some wonderful Americans doing a great job.

I used to be part of them when I worked for CIA. I'm very proud to be associated with them again. And I look forward to the challenges of the future. I also look forward to the confirmation process with the Senate. As a member right now on the Hill I know the value of that and the importance of that.