For Immediate Release
Office of the Press Secretary
August 9, 2004

Mr. Prime Minister, welcome. Thank you for coming. We've just had a very good visit, but that's what you would expect from two friends who are talking about important issues. 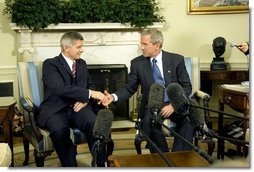 PRIME MINISTER BELKA: Well, it's one of a series of very important visits in our dialogue. Next month in Warsaw, we're having the beginning of strategic dialogue between the United States and Poland. And what happened here was really a beginning of this dialogue, or at least an introduction to these talks.

We covered a very broad range of issues, from Euro-Atlantic alliance, from the state of relations between Europe and America, to the Middle East, a wider Middle East initiative, and Iraq. We also touched upon our bilateral issues, including our economic cooperation, traveling, and so on and so on. Well, it's almost unbelievable how we could squeeze so many issues in a relatively short conversation. It was a very good conversation, very good exchange of opinions. And, well, it sets ground for further cooperation and further good talks between our people and ourselves.

We'll start off with Hunt.

Q Mr. President, U.S. forces have been fighting for five days in Najaf against the militia of Muqtada al-Sadr. The U.S. once said it was going to capture or kill him. What's our policy now?

PRESIDENT BUSH: Our policy is to work with Prime Minister Allawi and support the Iraqis as they move toward elections. Our troops were engaged against Sadr's militia, and so were the Iraqis. And it appears that we're making pretty good progress about stabilizing Najaf. But Prime Minister Allawi is now in charge of the country. He is a good, strong leader who cares deeply about the aspirations of his people, and he is somebody we're working with. And if he's got some suggestions to make, we're more than willing to listen to him. That's why Ambassador Negroponte is there, and the Ambassador will interface with the Iraqi government at their request.

Q Mr. President, Polish government is going to significantly reduce number of Polish troops in Iraq early next year. Did you ask Polish Prime Minister not to do that? And could you both comment on the fact that 73 percent of Poles are opposed to Polish military presence in Iraq?

And then when the -- it became apparent we would need stabilizing forces to help this country become a free country, the Polish government and the Polish people were very generous and provided not only troops, but leadership in a very important sector of the country. So the Prime Minister, I know, is very proud, justifiably so, about the contributions that Poland has made to making the world a better place.

PRIME MINISTER BELKA: Well, I guess, no one wants to stay in Iraq forever. It's a sovereign country. It has it's own internationally recognized government. It has its own rules, that is -- that are developing. And we treat our presence in Iraq as serving this country to stabilize and stand on its own feet. We didn't discuss dates, numbers. What we discussed is the way -- how the situation in Iraq develops, how the political calendar, how the political process is going on, and how is it -- how it shapes the character and size of our presence in this country. That's what is most important in our presence in Iraq.

I confirm that Polish troops, in our opinion, are doing right things. They behave gallantly. They show professionalism and also are quite successful in developing good working relations with the local leaders, helping them not only in keeping order, but also in developing institutions, rebuilding their economy, their schools, hospitals. Well, this is not -- this is not a typical military operation. It's a stabilization in all sense of this word.

Q Mr. President, with the economy not producing a whole lot of new jobs, are you considering adjustments or additions to your economic plan to try to give it a boost? And would an increase in interest rates tomorrow help or hurt?

PRESIDENT BUSH: Monetary policy is decided independently from the White House. Secondly, the economy is strong, and it's getting better. Imagine me being able to say to the Prime Minister of Poland, in spite of a recession, emergency, attacks, war and corporate scandals, we're growing, and growing quite substantially. We've added nearly 1.5 million jobs over the last 12 months.

And what we don't need to do is run up the taxes on the American people. This campaign is going to be talking about visions, about how to keep the economic recovery going, and there's a clear difference of opinion as to how to do it. I believe taxes ought to be low. I know we need tort reform. I know we need an energy policy. I know we need reasonable health policy to help hold down the costs, and that stands in stark contrast to my opponents who are willing to raise taxes and not willing to fight for tort reform, for example. But I'm optimistic about the economic vitality of the country.

Q Mr. President, when is the United States going to lift visas for Polish citizens, or at least this $100 fee for visas -- as a gesture of reciprocation?

PRIME MINISTER BELKA: We discussed this.

PRESIDENT BUSH: Well, I'll tell you, we sure did discuss it and the Prime Minister was very strong on the subject. He made it very clear what -- what his opinion is, and the opinion of his government, and the expectations of the Polish people. And because of his persuasiveness, there's now a pre-clearance procedure that will be taking place at the Warsaw airport. Secretary Tom Ridge is -- Ridge is here today, and he'll be given instructions to accommodate the Prime Minister's wishes that we begin a reform of the process. And it will start with pre-clearance process.

And I want to thank the Prime Minister for being such a strong advocate and pretty clear where he stands. And, hopefully, this will be a step in the right direction for the people of a country whose friendship we value.