For Immediate Release
Office of the Press Secretary
August 5, 2004

THE PRESIDENT: Thank you all. Please be seated.

America and our allies are fighting a new kind of war against a different kind of enemy. This conflict places great demands on the men and women of our armed forces, including our Guard and Reserve. They have met every test. They've risen to every challenge. 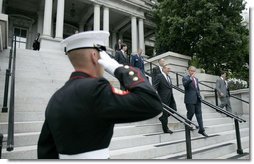 The war also places demands on those of us in government. We took an oath to protect our country. We have a solemn responsibility to support the servicemen and women who defend us in the field of battle. The Defense appropriations bill I will sign today commits $391 billion toward meeting that responsibility. With this legislation, America's military will know that their country stands behind them as they fight for our freedom, and as they spread the peace. No enemy or friend can doubt that America has the resources to prevail, and we will.

I want to thank the Secretary of Defense, Donald Rumsfeld, for his steadfast and strong leadership of our -- of our Pentagon. Mr. Secretary, thank you.

I appreciate Senator John Warner representing the United States Congress. Senator Warner is a strong leader when it comes to matters of defense. He's the Chairman of the Senate Armed Services Committee. This bill passed with overwhelming bipartisan support. I want thank you for that, sir.

America's military is fighting in many theaters, yet always for the same cause. We seek to preserve freedom and peace for ourselves and for our friends.

In the last three years, our military men and women have struck a series of decisive blows against the enemy. They have relentlessly attacked the al Qaeda network. They've killed or captured many of its leaders. They've destroyed its terror camps. We're disrupting its plans. We're doing our duty.

We've ended regimes in Kabul and Baghdad that supported and harbored terrorists and threatened America. They have helped to launch the nations of Iraq and Afghanistan on the path to lasting democracy and liberty. They have helped friendly nations build the strength and institutions necessary to fight terror. At this hour, our troops are staying on the offensive against al Qaeda. We're taking the fight to the enemies -- those who can't stand the thought of a free Iraq and free Afghanistan. Our troops are making America safer, and we're grateful for their sacrifices. 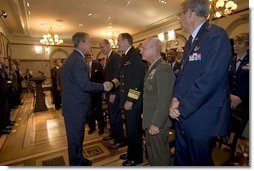 These great achievements have come at a cost of human life and grief. America is grateful for the families of those who mourn a loved one. We will honor their memory by completing the mission and making the world a more peaceful place. We have made a commitment to the men and women of our armed forces. We will support them. We will provide them fair pay and good treatment. We will continue to ensure they have the tools they need to defeat the enemies of today. We will develop the weapons and systems to meet the threats of tomorrow.

The bill meets these commitments -- first, by providing more then $103 billion to the greatest source of American strength -- our service people and their families. This appropriation is the fourth of my administration to include a pay raise for our troops. This year's raise of 3.5 percent brings the total pay raise over the last four years to nearly 21 percent. This money is well earned, well deserved, and well spent.

The bill also fulfills my pledge to eliminate the costs that too many service people have had to pay for off-base housing. It's a real boost to the quality of life for our military families. The excellence and professionalism of an all-volunteer force has never been higher. America must do all we can to encourage these special Americans to stay in uniform. And that starts with taking care of their families.

Second, this bill meets our commitments by making sure that our armed forces have every tool they need to meet and defeat the threats of our time. This bill provides $25 billion in emergency appropriations to support current operations in Afghanistan and Iraq, the front lines in the war on terror. This money will buy more armored Humvees, more ammunition, more fuel, more spare parts. It will upgrade our helicopters with the latest equipment, allowing them to fly more safely in the dangerous theaters.

This bill helps America maintain the peace around the world and keep our commitments to our allies. It funds construction of three new state-of-the-art guided missile destroyers to patrol the seas; 42 new F/A-18 fighter aircraft to guard the skies. It provides $4 billion for new C-17 strategic air lifters, which will increase our ability to move forces quickly over long distances. And $200 million will buy more Predator unmanned surveillance aircraft to track and hunt our enemies.

This bill provides $10 billion for systems to defend against the threat from ballistic missiles. Later this year, the first components of America's missile defense system will become operational. This will fulfill a pledge I made to the American people more than four years ago. America and our allies face a deadly threat from ballistic missiles armed with the world's most dangerous weapons. And we will deploy the technologies necessary to protect our people. 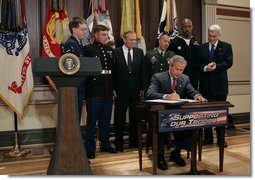 Recent history has shown that threats to our shores can emerge from failing states half a world away. By acting early to end a crisis, we can make our world safer. That's why this bill provides $95 million to help the people of Darfur, in western Sudan. Brutal militias there are causing human suffering on an immense scale. The new funding will provide famine relief, assistance for refugees and other humanitarian aid. Yet not amount of aid can substitute for true and lasting peace. The Government of Sudan must stop the violence of Janjaweed militias, and all parties must respect the cease-fire and allow the free movement of humanitarian workers and supplies.

Third, this bill meets our commitment to America's Armed Forces by preparing them to meet the threats of tomorrow. Our enemies are innovative and resourceful, and so are we. They never stop thinking about new ways to harm our country and our people, and neither do we. We must never stop thinking about how best to defend our country when we all must always be forward-thinking.

Over the past few years, new ideas and new technologies have increased the precision of our weapons, reduced battlefield casualties, and lessened the toll of war on innocent life. This bill continues that progress by funding the technologies that are changing the way we fight wars in order to keep the peace, technology such as: the Army's Future Combat System, which will give every soldier precise tactical information in the heat of battle; the Littoral Combat Ship, which will increase the reach of our Navy into hostile shores and waterways; the versatile and cost-effective Joint Strike Fighter; and Wideband Satellite laser communications that will improve the ability of our forces to communicate over great distances.

I appreciate the solid and bipartisan support of this bill. I appreciate both people -- people of both parties coming together to support our troops. We're doing our duty to the people who are out doing their duty to defend us and make the world a more peaceful place. The message is clear: In a time of conflict and challenge, America stands behind our military.

By taking care of our service people in uniform, by addressing the threats of today, by preparing for the threats of a tomorrow, this bill will help make America a safer place. And so I'm pleased to sign the Defense Appropriations Act for Fiscal Year 2005.

Thank you all for coming. (Applause.)