For Immediate Release
Office of the Press Secretary
July 21, 2004

THE PRESIDENT: Thank you, all. Mr. Speaker. Please be seated. Thanks. Good morning, and welcome to the Rose Garden. On September the 11th, 2001, America saw the destruction and grief terrorists could inflict with commercial airlines turned into weapons of mass murder. Those attacks revealed the depth of our enemies' determination, but not the extent of their ambitions. We know that the terrorists seek an even deadlier technology. And if they acquire chemical, biological or nuclear weapons, we have no doubt they will use them to cause even greater harm. 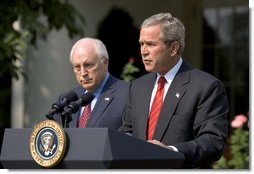 The bill I am about to sign is an important element in our response to that threat. By authorizing unprecedented funding and providing new capabilities, Project BioShield will help America purchase, develop and deploy cutting-edge defenses against catastrophic attack.

This legislation represents the collective foresight and considered judgment of United States senators and members of the House of Representatives from both political parties -- many of whom experienced bioterror firsthand when anthrax and ricin were found on Capitol Hill. It reflects 18 months of hard work and cooperation by many dedicated public servants in Congress and in the White House. It sends a message about our direction in the war on terror. We refuse to remain idle while modern technology might be turned against us; we will rally the great promise of American science and innovation to confront the greatest danger of our time.

I want to thank Senator Gregg and Senator Kennedy and Senator Cochran for working on this bill. I appreciate the efforts. I appreciate Congressmen Barton, Billy Tauzin, Chris Cox and Henry Waxman, as well, for their hard work.

I appreciate the members of my administration who are here, thanks for coming. These will be the implementers of this important piece of legislation.

Project BioShield will transform our ability to defend the nation in three essential ways. First, Project BioShield authorizes $5.6 billion over 10 years for the government to purchase and stockpile vaccines and drugs to fight anthrax, smallpox and other potential agents of bioterror. The Department of Health and Human Services has already taken steps to purchase 75 million doses of an improved anthrax vaccine for the Strategic National Stockpile. Under Project BioShield, HHS is moving forward with plans to acquire a safer, second generation smallpox vaccine, an antidote to botulinum toxin, and better treatments for exposure to chemical and radiological weapons. 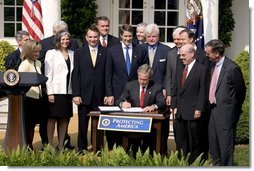 Private industry plays a vital role in our biodefense efforts by taking risks to bring new treatments to the market, and we appreciate those efforts.

By acting as a willing buyer for the best new medical technologies, the government ensures that our drug stockpile remains safe, effective and advanced. The federal government and our medical processionals are working together to meet the threat of bioterrorism -- we're making the American people more secure.

Second, Project BioShield gives the government new authority to expedite research and development on the most promising and time-sensitive medicines to defend against bioterror. We will waste no time putting those new powers to use. Today, Secretary Thompson will direct the NIH to launch two initiatives -- one to speed the development of new treatments for victims of a biological attack, and another to expedite development of treatments for victims of a radiological or nuclear attack. Under the old rules, grants of this kind of research often took 18 to 24 months to process. Under Project BioShield, HHS expects the process to be completed in about six months. Our goal is to translate today's promising medical research into drugs and vaccines to combat a biological attack in the future -- and now we will not let bureaucratic obstacles stand in the way.

Third, Project BioShield will change the way the government authorizes and deploys medical defenses in a crisis. When I sign this bill, the Food and Drug Administration will be able to permit rapid distribution of promising new drugs and antidotes in the most urgent circumstances. This will allow patients to quickly receive the best available treatments in an emergency. Secretary Thompson has directed the FDA to prepare guidelines and procedures for implementing this new authority. By acting today, we are making sure we have the best medicine possible to help the victims of a biological attack.

Project BioShield is part of a broader strategy to defend America against the threat of weapons of mass destruction. Since September the 11th, we've increased funding for the Strategic National Stockpile by a factor of five, increased funding for biodefense research at NIH by a factor of 30, secured enough smallpox vaccine for every American, worked with cities on plans to deliver antibiotics and chemical antidotes in an emergency, improved the safety of our food supply, and deployed advanced environmental detectors under the BioWatch program to provide the earliest possible warning of a biological attack. 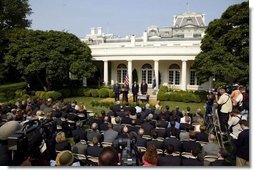 The threat of bioterrorism has brought new challenges to our government, to our first responders and to our medical personnel. We are grateful for their service. Not long ago, few of these men and women could have imagined duties like monitoring the air for anthrax, or delivering antibiotics on a massive scale. Yet, this is the world as we find it; this nation refuses to let our guard down.

Tomorrow, the 9/11 Commission will issue its findings and recommendations to help prevent future terrorist attacks. I look forward to receiving the report. I will continue to work with the Congress and state and local governments to build on the homeland security improvements we have already made. Every American can be certain that their government will continue doing everything in our power to prevent a terrorist attack. And if the terrorists do strike, we'll be better prepared to defend our people because of the good law I sign today.

It's my honor to invite the members of the Congress to join me as I sign the Project BioShield Act of 2004. Thanks for coming. (Applause.)