For Immediate Release
Office of the Press Secretary
July 21, 2004

PRESIDENT BUSH: There will be two opening statements, one by me, one by the Prime Minister. I'll call upon a member of the American press. The Prime Minister will call somebody from the Romanian press. And then we'll just do that one more time.

Mr. Prime Minister, welcome. We've just had a very good visit. It's the kind of visit that friends would have. We talked about our relationship. I complimented Romania and the Prime Minister's understanding that we need to work together to fight terror. We talked about the need to continue to work together to spread freedom and, therefore, peace in troubled parts of the world. And I want to thank him very much for his understanding and his vision. 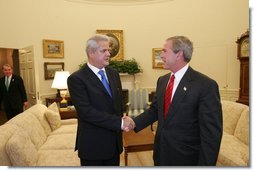 We talked about economic ties. He asked if it would be possible to spread the word that Romania is a good place to invest, and I told him that because the country makes the right decisions, that American companies will take a look at Romania. Trade is up, which is good for Romanian people and for the American people -- there is commerce going back and forth, which is a positive development.

I congratulated the Prime Minister on Romania's role at the United Nations. I think he held the presidency very well and we appreciate that very much.

So it's been a very good visit. And I'm glad you're back and I look forward to further discussions with you.

PRIME MINISTER NASTASE: Thank you very much, Mr. President. It's good to be back. Mr. President, thank you for your hospitality. It is, by the way, the first time that I've been here representing an ally of the United States. And I am very proud to come here to confirm to the President our continuous support for fighting together terrorists in the world. And also our support for the vision of President Bush not only on general issues, but very specifically on a very complex process of changes in Iraq.

I had the honor to chair the Security Council during the Romanian presidency in New York. And, well, I briefed the President with major decisions, prospects, possibilities which are now offered for a wise political decision concerning Iraq. Reconstruction, stabilization, political development are the key words for the future of Iraq. And we want to encourage the Iraqi people to take ownership of their own choices.

I think this is part of the end of the transition in a country which suffered a lot, but where there is a huge willingness to understand what can make us speed up the process of modernization. And we count very much on President Bush, on his colleagues, and also on the American businessman.

It was also very important to discuss about what happens now in areas in, like, the Black Sea, the Balkans. And I offered the President a five-star location for military bases, and there will be a decision on that very soon.

Mr. President, may I say also that the honor for us, being here, it's a great privilege, a great honor. We remember with great pleasure your visit to Bucharest and the rainbow speech, and the gathering of more than 200,000 people.

Thank you very much again.

Q Thank you, Mr. President. President Clinton suggested that perhaps politics was behind the disclosure of the Sandy Berger investigation. Do you have anything to say about that? And, also, when did you learn about this probe?

PRESIDENT BUSH: I'm not going to comment on this matter. This is a serious matter, and it will be fully investigated by the Justice Department.

PRESIDENT BUSH: I'm not going to comment on it. It's a very serious matter. It will be fully investigated by the Justice Department.

Q Mr. President, please, you said something about improving of economic relations between Romania and the U.S. Could you be more specific on that issue, please?

And the Prime Minister and I talked about those ingredients. He said he's had some good visits with business leaders here in America. But those are decisions, in our country, that are made apart from government. In other words, each individual business will make that decision. They are investment decisions in Romania apart from the offices of government. And that's what the Prime Minister understands. And as he said, he had some good visits today. I'm sure he'll brief you on those visits later on.

Q Your advisors were meeting today with the Chairmen of the 9/11 Commission.

Q In light of what you know now, do you think the attacks were preventable? And, also, do you plan to meet personally with the commissioners to discuss their findings and recommendations?

PRESIDENT BUSH: First of all, I haven't talked to my advisors, who have met with the commission, yet. I will later on. Secondly, I am going to meet with -- as I understand it -- with the chairman and vice chairman of the commission. So I haven't had a chance to fully see -- read that which they have developed. I look forward to it. This is a -- I've always said this is an important commission.

And the main reason why is, is because a President and a Congress must have the best possible intelligence to make good decisions about how to protect America and our friends and allies. We've spent a lot of time today talking about counterterrorism or counterproliferation. And the best way to succeed in counter -- those efforts is to share intelligence. And therefore we need to have good intelligence. And the main recommendations, as I understand it, from the 9/11 Commission will be -- is how best to structure the intelligence agencies.

Again, I haven't seen the report. I hope they talk about more human intelligence, because human intelligence is one of the most effective ways for us to gather intelligence in the first place. I hope they talk about it, and I suspect they will, about using modern technologies to better listen and see events taking place, so that we can protect ourselves. And then, of course, there needs to be a full discussion about how best to coordinate the different intelligence-gathering services here in the country.

Let me say one other thing about the 9/11. I told the commissioners right here in the Oval Office that had we had any inkling, whatsoever, that terrorists were about to attack our country, we would have moved heaven and Earth to protect America. And I'm confident President Clinton would have done the same thing -- any President would have.

So, anyway, I'm looking forward to the report. I'm glad -- they've done a lot of good work and it's going to be very useful for the country to listen to what they have to say.

Q Thank you, sir. Question for President Bush. Sir, in both United States and Romania, you have elections this autumn. It might be four possibilities, either you win and Mr. Nastase is winning, either you both lose, either one of you is winning, the other one is losing.

Q Sir, which one of these four possibilities represents the biggest disadvantage for Romania? (Laughter.)

PRESIDENT BUSH: Well, let me answer you this way: I am going to win. And the Prime Minister told me he is going to win. And, therefore, the other three possibilities you've outlined are not going to happen.

The interesting thing is, is that here we are talking about elections in Romania. That's what I was thinking during this discussion, that we -- a person standing for election in Romania and the United States President are now talking about what it means to campaign, a conversation which would not have been taking place 20 years ago.

You know, I'll never forget my trip to Bucharest at the rainbow speech. It was one of the most moving experiences of my Presidency. And the reason why was that the rainbow, itself, that appeared in the midst of a rainstorm in front of 200-plus-thousand people ended right behind -- from my vision, ended right behind the place where the tyrant, Ceausescu, gave his last speech. It was -- it was a very powerful message. It moved me deeply during the moment.

And it still moves me to think that there was a powerful message being delivered by nature, to the point where I remember turning back to the people of Romania and said, "God is smiling on Bucharest." And I meant that.

And part of my beliefs, Mr. Prime Minister, is that -- that one of the great universal values of the world is that men and women deserve to be free. And here we are talking about an election voted on, in your country and mine, by free people.

Thank you for coming.