For Immediate Release
Office of the Press Secretary
July 19, 2004

First, bienvenidos. I'm glad you're here, Mr. President. Ricardo Lagos is a very wise man, who is -- understands the politics of South America very well and is very worldly, and so I always enjoy visiting with him. He's a man of good advice and sound counsel. And so I'm looking forward to our continued discussions over lunch. 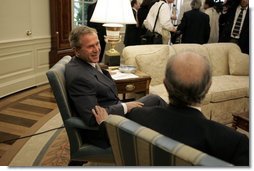 PRESIDENT LAGOS: Thank you. Well, let me tell you that I am extremely happy to be here again, to be able to discuss and talk with President Bush about the major areas in the region. Also, the update on the latest developments in the Middle East.

And at the same time I think, as President Bush is saying, our free trade agreement has been working in the right direction. And we're extremely happy to see that. Later on we would like also to see what do we have in the next APEC meeting in November and what are the trade discussions in the Doha round next month -- next week.

And I will say also that from the point of the view of the region, President Bush has been able to have a lot of commitments to the region and we were discussing also our own commitment in Chile, with regard to Haiti, what we are doing in the region. And I think that it's very important, as President Bush has told us, in a sense, that the U.S. is going to continue backing, helping the Haitian people.

PRESIDENT LAGOS: I will translate. (Laughter.)

PRESIDENT BUSH: That would be you.

Q Thank you. The Acting Director of the CIA says he sees no need to create a Cabinet-level National Director of Intelligence. Does he speak for you and your administration when he says that, Mr. President? And speaking of the CIA, can you give us an update on when you expect to name a new Director?

PRESIDENT BUSH: The 9/11 Commission will issue a report this week, and, evidently, will lay out recommendations for reform of the intelligence services of the United States. I look forward to seeing those recommendations. They share the same desires I share, which is to make sure that the President and the Congress gets the best possible intelligence. 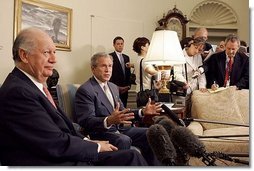 I have spoken about the reforms. Some of the reforms, I think, are necessary: more human intelligence, better ability to listen or to see things, and better coordination amongst the variety of intelligence-gathering services. And so we'll look at all their recommendations, and I will comment upon that having studied what they -- what they say.

Q And the new Director appointment?

PRESIDENT BUSH: Still thinking about it. Let you know when it's going to happen. I wouldn't -- I know there's intense speculation over time, and people get their hopes built up. And still -- still taking a good, hard look.

Q -- from Chile. We've been hearing a lot in the past few days about the Riggs investigation, that found out hidden accounts of Senator Pinochet. I understand two senators that are working in that committee are asking the Justice Department to take legal actions. Is that possible? What consequences can that have?

PRESIDENT BUSH: Well, I think the people of Chile must know that there will be a full investigation. It's important for the facts to be en la mesa, as we say -- on the table, and -- so that we know what course of action may or may not be needed. And that's what you're seeing. You're seeing a transparent society dealing with allegations and/or -- and the Riggs Bank is being fully investigated, and they'll be investigated in a very open way.

And the President brought this issue up. Of course, he's concerned about it, as well. He wants to know the truth. And I appreciate that, and we'll make sure that people do know the truth. And that's what you're seeing. You're beginning to see the process of truth-finding.

Q Thank you. We're hearing now that eight of the September 11th hijackers passed through Iran before attacking the United States. Do you think there's a September 11th link to Iran?

PRESIDENT BUSH: Well, listen, we want -- of course, we want to know all the facts. Acting Director McLaughlin said there was no direct connection between Iran and the attacks of September the 11th. We will continue to look and see if the Iranians were involved. I have long expressed my concerns about Iran. After all, it's a totalitarian society where free people are not allowed to exercise their rights as human beings. I have made it clear that if the Iranians would like to have better relations with the United States there are some things they must do. 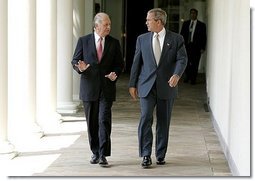 For example, they're harboring al Qaeda leadership there. And we've asked that they be turned over to their respective countries. Secondly, they've got a nuclear weapons program that they need to dismantle. We're working with other countries to encourage them to do so. Thirdly, they've got to stop funding terrorist organizations such as Hezbollah that create great dangers in parts of the world.

No, this has been an issue that I have been concerned about ever since I've been the President. As to direct connections with September the 11th, we're digging into the facts to determine if there was one.

Q -- from Chile. What do you think about the role that Chile is playing in the reconstruction in Haiti and as an observer of the political referendum in Venezuela?

PRESIDENT BUSH: Listen, the Chilean response in Haiti was rapid and important. President Lagos is a decisive man, and when he saw a problem, he went to the people of Chile and explained the problem and responded. And I want to thank him for that. It was -- Chile is making a very important contribution to the stability and, hopefully, the prosperity of Haiti. And we spent a lot of time talking about, today, about how the United States can continue to not only stay involved, but to help. And I find it very interesting that the United Nations is sending a very distinguished citizen from Chile to Haiti to help stabilize that country so the people of Haiti have a chance to live a hopeful life.

And that's going to require security measures, and as the President mentioned -- I think you said in Spanish, there's a donors conference tomorrow, it's a very important conference, and that we will be attending, along with Chile, to see if we can't set priorities for the people of Chile [sic]* so they have a chance to live a good life.

And the second part of the question was?

PRESIDENT BUSH: Again, this is a -- Chile plays a very important role in our neighborhood, and the referendum in Venezuela is an important referendum. And the referendum must be conducted in a honest and open way. And the influence of President Lagos is a very important influence, because he has made it clear that for the credibility of the current government, they must welcome observers, they must encourage observers, and they must not interfere with the process, so that the people of Venezuela have a chance to express their opinion without fear of reprisal.

And so, again, I want to thank my friend, Ricardo Lagos, for playing a very constructive role.