For Immediate Release
Office of the Press Secretary
July 13, 2004

THE PRESIDENT: Thanks for coming. In just four years, the African Growth and Opportunity Act has shown the power of free markets to improve the lives of people in both the United States and Africa. By reducing barriers to trade, this law has increased export, created jobs, and expanded opportunity for Africans and Americans alike. It has given American businesses greater confidence to invest in Africa, and encouraged African nations to reform their economies and governments to take advantage of the opportunities that AGOA provides. So today I'm pleased to build on that success and extend the law's benefits long into the future by signing the AGOA Acceleration Act of 2004. 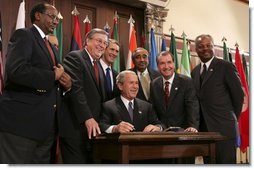 This legislation is a product of strong bipartisan cooperation, and I thank the members of the House and the Senate for working together on this very important piece of legislation. And I want to thank those in the audience who worked hard to see that the bill made it to my desk as quickly as it did.

Mr. Secretary, thank you very much for your leadership. Secretary Powell is a strong believer in the potential of the continent of Africa, and so am I.

I appreciate so very much Senate Majority Leader Bill Frist for joining us today. Senator, thank you for coming. I'm pleased to see that my friend, the Ranking Member of the Senate Finance Committee, Max Baucus, is still standing. (Laughter.) And I appreciate your leadership, sir. We're honored that Dick Lugar, who is the Chairman of the Senate Foreign Relations Committee, is with us. Mr. Chairman, thank you, and thank you for your clear vision for a better world. I appreciate so very much the members of the Ways and Means Committee who are here with us -- the Chairman and Ranking Member -- Chairman Bill Thomas, who's worked so hard for this legislation, as has his friend and Ranking Member, Charlie Rangel, both fine members of the Congress. Thank you all for being here, and thanks for your good work. I also am honored that Ed Royce, the Chairman of the International Relations Sub-committee on Africa, has joined us, and soon will be joined by Donald Payne, the Ranking Member, as well.

These members put in good work. They worked hard. They brought the other members of Congress along with them, many of whom are with us.

I am honored that the dean of the African Diplomatic Corps stands with me today. Mr. Ambassador, thank you for coming. I'm proud you're here. And thank you for representing the other ambassadors who have joined us today. We appreciate you taking time to come. And thanks for supporting this legislation. 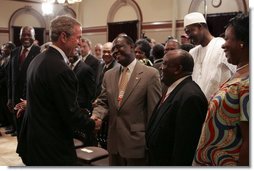 There's a growing consensus in both Africa and the United States that open trade and international investment are the surest and fastest ways for Africa to make progress. That's what you have said; that's what Congress had responded to. For too many years, the world's efforts to promote Africa's development were focused on aid. Development aid is important. Nothing wrong with aid. And my administration has substantially increased aid to Africa, and we appreciate working with the members to do that.

But as Uganda's President Museveni has said, "By itself, aid cannot transform societies. Only trade can foster the sustained economic growth necessary for such transformation." This African leader understands that when nations close their markets and opportunity is hoarded by a privileged few, no amount of development aid is ever enough. But when nations respect their people, open their markets, expand freedom and opportunity to all their citizens, entire societies can be lifted out of poverty and despair. This is a hopeful piece of legislation. As America works for open markets and opportunity on the African continent, we will also confront disease and hunger and the violence that undermines progress and hope.

I'm deeply concerned about the humanitarian and human rights crisis in Darfur, Sudan. For the sake of peace and basic humanity, I echo the sentiments of the Secretary of State. I call upon the government of Sudan to stop the Janjaweed violence. I call on all parties of the conflict to respect the cease-fire, to respect human rights, and to allow for the free movement of humanitarian workers and aid. The United States and the United Nations and the leadership of the African Union are working to bring relief to the suffering people of that region. America will continue to strongly support these efforts for peace.

One way to spread peace is to encourage political and economic reform across Africa by opening markets here in the United States. It's important for our people to understand, by opening United States markets we make it more likely there will be peace on the continent of Africa.

AGOA nations are strengthening the rule of law. They are lowering trade barriers, they're combating corruption, and eliminating child labor. They're setting an important example for the entire continent, demonstrating that governments that respect individual rights and encourage the development of their markets are more likely to grow economically and achieve political stability.

Like all good partnerships, AGOA has been beneficial to all parties. Free trade between the United States and sub-Sahara Africa has created jobs, wealth, and opportunity on both continents. Last year, under AGOA, African exports to the United States increased by 55 percent, and African -- and American businesses saw a 15-percent increase in our exports to sub-Sahara Africa that equals almost $7 billion. The most notable gains were made by American companies selling agricultural goods and machinery and transportation equipment.

See, when you sell goods in Africa, it means somebody is finding work here at home. Trade must work both ways. AGOA has been beneficial to the people of the continent of Africa and to the people of the United States of America. That's why this is a good piece of legislation.

Since its enactment in 2000, AGOA has generated over $340 million in investment and created thousands of jobs. Things are happening because of the law we're extending today, positive things for people in Africa and in America. The enactment of this law will help ensure that this mutually beneficial trade continues. Trade and investment from around the world is essential to world peace. The United States and the nations of the sub-Saharan Africa are working together to break down trade barriers around the world -- not just between ourselves, but around the world.

I'm so pleased and proud to see the ambassadors from the African nations who are here. Thank you all for coming. You've worked hard to make AGOA a success. You've worked hard to spread the message in the halls of Congress, and your hard work has paid off. I share your optimism about Africa's future. That's what we believe. Those of us who are standing up here believe in the future of Africa. We appreciate the commitment to freedom. We appreciate your understanding that we all have an obligation to spread opportunity throughout all corners of this important part of the world.

And now, it is my honor to sign this important piece of legislation. (Applause.)