For Immediate Release
Office of the Press Secretary
July 6, 2004

PRESIDENT BUSH: It's my honor to welcome the Prime Minister of Iceland to the Oval Office.

I remember my first NATO meeting, and I walked in and the person who greeted me and made me feel most at home was my friend here. And I've never forgotten that. Iceland has been a steady friend of the United States of America, and they have been an important friend. 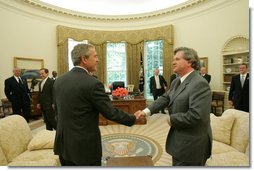 We had an interesting discussion on some important issues, and it was a frank discussion. And that's what you expect among friends. It was open and honest. And the Prime Minister is a person who cares deeply about the security of his country and the welfare of his people, and that's why he's been such an effective leader for the good people of Iceland.

PRIME MINISTER ODDSSON: Thank you very much, Mr. President. I'm very happy to be here, not least on the President's birthday. It's a privilege.

PRESIDENT BUSH: Thank you for remembering.

PRIME MINISTER ODDSSON: Well, we discussed some things -- I will make two points. You had just recently, a week ago, in a NATO meeting in Istanbul, a very good meeting I think -- not least because of the firm leadership of the President and his open manner, his easy-speaking manner that everybody understands when he speaks. And he changed the atmosphere inside NATO for the better. The past is behind us, people are united to a future. Secondly, we had the opportunity to discuss the defense issues in Iceland, which is very important to us. And the President is looking on that in a positive way. But, of course, he has to see the issue from all sides. This was a fruitful discussion about the future. Thank you.

A couple of questions. Terry.

Q Mr. President, the Republican National Committee says that John Edwards is disingenuous, inexperienced and unaccomplished. I wonder, do you agree with that? Is that the tone that you want to set in talking about --

PRESIDENT BUSH: Listen, I welcome Senator Edwards on the ticket. The Vice President called him early this morning to say -- after the announcement was made -- to say that he welcomes him to the race, and as do I. And I look forward to a good, spirited contest.

Have you got somebody from your press corps?

Q Mr. Prime Minister, did you reach an agreement on the defense treaty with Iceland?

PRIME MINISTER ODDSSON: That was never -- the meeting -- was to have an agreement. Now, today I had the opportunity to explain my view of the issue to the President, and he is looking into my position and the Iceland position, but he had an open mind.

PRESIDENT BUSH: Yes. Let me comment on this, about -- this is an issue related to the F-15s. For the American press, we've got four F15 fighters stationed there. The Prime Minister pressed very hard for us to keep the fighters there. He was very eloquent, very determined that the United States keep the troops there. And I told him, I said I'm open-minded about the subject. I want to make sure I understand the full implications of the decision as to whether or not to leave them there. And we will gather more information. He is going to provide information about the basing there in Iceland and the requirements there. I will talk to the respective departments here and I will make a measured judgment as to the finality of this issue. 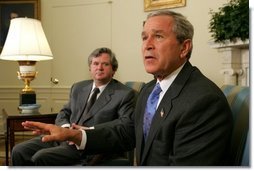 I told the Prime Minister I'm -- I appreciate our alliance, I appreciate his friendship. I fully understand the arguments he's made and we will work together to solve the issue.

Holland, where are you?

Q Here, sir. Thank you. There's a story today that the CIA held back information from you that Iraq had abandoned its WMD programs. Is that true? And what's your timetable on nominating a new CIA director? Are you going to wait until after the election?

PRESIDENT BUSH: I haven't made up my mind on the nomination process. Secondly, I will wait for the report, the Senate report to come out. This is information from the report of the United States Senate, Chairman Roberts' committee. I will look at the whole report. I will tell you, however, that I know that Saddam Hussein was a threat. He was a threat to the neighborhood; he was a threat to the people of Iraq. He harbored terrorists. Mr. Zarqawi, who continues to kill and maim inside of Iraq, was in the country prior to our arrival. Saddam Hussein had the intent, he had the capability, and the world is better off without Saddam Hussein in power. And the world will be more peaceful when this Iraqi government, under Prime Minister Allawi, emerges and there are elections.

And that's what we're seeing. We're seeing a transformation in a part of the world that needs liberty and freedom. And so I look forward to the full report, and I'll react to it when I see it.

PRIME MINISTER ODDSSON: Well, I just -- on this, I must say I agree with the President about Iraq. The future of Iraq is -- the future of the world is much better because of the undertaking that the United States, United Kingdom and their alliances took there. And without that done, the situation in that area of the world would be much more dangerous than it is now. There's hope now. There was no hope before.

(Everyone sings "Happy Birthday" to the President.)

PRESIDENT BUSH: Thanks. You actually call that singing? (Laughter.) It was beautiful.