For Immediate Release
Office of the Press Secretary
June 23, 2004

THE PRESIDENT: Welcome to the White House. Laura and I are delighted to see all of you, especially the men and women we honor today, and their families. We're glad you're here.

This afternoon I have the privilege of presenting our nation's highest civil award. The Presidential Medal of Freedom recognizes achievement in public service, in science and education, entertainment, the arts, athletics, business and other fields. As the citations will indicate, each of the men and women has led of life of accomplishment and distinction, and holds special respect among the people of the United States. 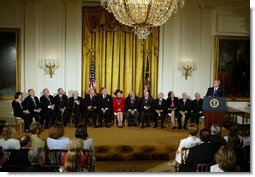 One of this year's recipients is a world leader who is known, respected and loved as perhaps no other figure of our time. Three weeks ago it was my honor to visit Vatican City and present the Medal of Freedom to Pope John Paul II. We're honored that His Holiness is represented here today by Archbishop Montalvo. We're also pleased that the Archbishop of Washington, Cardinal McCarrick, is with us.

For nearly 26 years as supreme pontiff of the Roman Catholic Church, he has been one of the great voices for good in the world -- guiding the souls of the faithful and sometimes guiding history, itself. From his days as a young seminarian to this very hour, he's been a foe of tyranny, a minister of true authority, and a person of great wisdom and kindness and moral courage. The world is far different and far better because this son of Poland has occupied the chair of Saint Peter.

The Medal of Freedom was also presented last December to Robert L. Bartley, shortly before his death at age 66. I had the honor of informing Robert L. Bartley that he had won this great award by telephone. Bob Bartley was a man of great intellect and conviction. And with those qualities, for more than 30 years, he led the editorial staff of the Wall Street Journal. The goodness of his values, the clarity of his thinking and the high quality of his writing earned him the Pulitzer Prize in 1980. His belief in free markets, and his faith in the wisdom of democracy is still seen in the writings of the many journalists Bob Bartley encouraged. They and the nation are grateful for his life's work, and we are honored to have Bob's wife, Edith, with us today.

The life of Dr. Vartan Gregorian began in Iran, in a town called Tabriz. As a boy, he loved books, and was blessed with a wonderful grandmother who encouraged him and inspires him still. His great gift has been to share his love of learning with others, as President of Brown University, President of the New York Public Library, and now as President of the Carnegie Corporation. Along the way, Dr. Gregorian has won the loyal friendship of many students and colleagues, and he has received more than 50 honorary degrees. And today the nation honors one of our most respected academic leaders.

Ambassador Ron Lauder and Leonard Lauder are here to receive the Medal of Freedom on behalf of their mother, who passed away in April. The posthumous award to Estee Lauder recognizes the great American success story that began with an immigrant family in Queens, New York. For this woman, born in 1908, rising to the top of the business world was not easy. Estee Lauder built a global cosmetic company, she said, "not by dreaming, or hoping for it, but by working for it." Hers became one of the most famous American names in the world. And with this medal, America proudly remembers the great achievements of Estee Lauder. 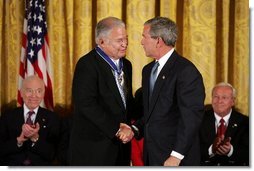 Rita Moreno has also found success in New York, having found her way there from Puerto Rico. She first performed on stage as a young girl, and was on Broadway by age 13. Rita is remembered by many for her Oscar-winning performance in West Side Story. But the years since have been filled with memorable performances by a lady of incredible talent and style, energy and beauty. To a collection that includes the Oscar, the Tony, the Emmy and the Grammy, Rita Moreno may now add the Presidential Medal of Freedom, and we give this honor with affection and appreciation.

On a January night in 1888, a group of men, meeting not far from the White House, founded the National Geographic Society. In the years since, the society has flourished, thanks, in large part, to a family named Grosvenor. Gilbert Melville Grosvenor is the fifth generation of his family to hold the title, President of the Society. As chairman of the Society's board of trustees, and earlier as president, he has maintained the excellent standards and reputation that we rightly associate with the National Geographic.

Gil has also furthered the Society's mission of protecting land and wildlife, teaching young people about geography and instilling in readers a respect for other cultures and nations of the world. We honor him today for his good stewardship of a great American institution.

Walter Wriston is unable to attend this afternoon, but is represented here by his daughter, Catherine, and his brother-in-law, Robert. More than 60 years ago, Walter Wriston worked here in Washington at the Department of State, Mr. Secretary. After serving his country further as an Army officer in World War II, he set out to find work in New York.

Plenty of jobs were available in banking, but Walter said banking was at the top of his list of everything dull. (Laughter.) In the decades that followed, while rising to the leadership of Citibank and Citicorp, Walter Wriston made the industry a lot more interesting, ushering in an era of unprecedented innovation and improved service. He saw the trends of the future, and he started a few of his own -- first among them, electronic banking. 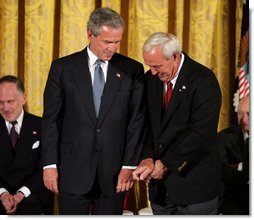 We honor him today for his great foresight, his principled corporate leadership, and we thank him for all he has done to extend the opportunities of our free enterprise system.

Norm Podhoretz ranks among the most prominent American editors of the 20th century. And he's doing pretty well in the 21st. (Laughter.) Never a man to tailor his opinions to please others, Mr. Podhoretz has always written and spoken with directness and honesty. Sometimes speaking the truth has carried a cost. Yet, over the years, he has only gained in stature among his fellow writers and thinkers. Today we pay tribute to this fierce intellectual man and his fine writing and his great love for our country.

The story is told that on election night, 1962, President John F. Kennedy heard that his home state had just elected a black man as attorney general. The President said, "That's the biggest news in the country." Bigger news would follow in the career of Edward William Brooke III.

Within four years, this decorated Army veteran would become the first African American ever elected by popular vote to the United States Senate. And when he came to the Senate, he was coming home. He was the youngest child of Helen and Edward Brooke, Jr. He was raised right here in Washington. And here he learned the values that led him to a lifetime of service.

Twenty-five years after leaving office, Senator Brooke is remembered for the high intellect and superb judgment he brought to the Senate. And across our nation, the Senator is still admired as an historic figure, a man of honor, and one of America's most distinguished public servants.

Dr. Arnall Patz will always be known as the man who has given to uncounted men, women and children the gift of sight. As a 32 year old ophthalmologist, Dr. Patz was the first to understand that the practice of giving high levels of oxygen to premature infants was causing an epidemic of blindness in babies. For more than a half-century his name has been the gold standard in the field of researching the causes and treatment of eye disease. One of the first awards Dr. Patz received was presented many years ago by Helen Keller. Today, with the Medal of Freedom, this great healer receives the thanks of our entire nation.

Millions of Americans reserve a special respect for Gordon B. Hinckley, who still works every day as President of the Mormon Church, and who, on this very day, turns 94 years old. Mr. Hinckley is the grandson of Mormon pioneers and has given devoted service to his church since 1935. He's always shown the heart of a servant, and the gifts of a leader. Through his discipline and faithfulness, he has proven a worthy successor to the many fine leaders before him. His church has given him its highest position of trust, and today this wise and patriotic man receives his country's highest civil honor.

Doris Day could not be with us this morning, but this beautiful lady is a special presence in American life. I called her yesterday and told her she would be missed. I told her to watch C-SPAN -- (laughter) -- just in case I said something nice about her. (Laughter.) Even when Harry Truman lived in the White House, all of America knew the name of the girl who sang, "Sentimental Journey" over the radio.

In the years since, she has kept her fans and shown the breadth of her talent in television and the movies. She starred on screen with leading men from Jimmy Stewart to Ronald Reagan, from Rock Hudson to James Garner. It was a good day for America when Doris Marianne von Kappelhoff of Evanston, Ohio decided to become an entertainer. It was a good day for our fellow creatures when she gave her good heart to the cause of animal welfare. Doris Day is one of the greats, and America will always love its sweetheart.

For all who love the game of golf, and for those who love to see it played, there has never been a sight in the game quite like Arnold Palmer walking down the fairway toward the 18th green. The announcer Vin Scully once said, "In a sport that was high society, Arnold Palmer made it 'High Noon.'" (Laughter.) For more than 50 years, over thousands of miles of fairway, and in 92 professional championships, Arnold has given his all, playing with style and a daring that changed the game of golf. He drew millions of fans, and every big crowd we see at a golf tournament today started with Arnie's Army. The father who had taught him to play golf at Latrobe Country Club would be very proud today of Arnold Daniel Palmer.

And now, I ask the military aide to read the Medal of Freedom Citations.

(The citations are read.)

THE PRESIDENT: Thank you again for coming. Congratulations. Laura and I now ask you to join us at a reception to honor these remarkable Americans, and, of course, His Holy Father. God bless you all. (Applause.)