For Immediate Release
Office of the First Lady
June 9, 2004

MRS. BUSH: Good afternoon to everyone and thank you all for coming out today. We just had a really wonderful day-and-a-half together, the spouses of the leaders of the G8. We have Cherie Blair here, Madame Chirac, and Ludmilla Putin are joining us today. Sheila Martin is also here on Sea Island, but she is not with us right now. 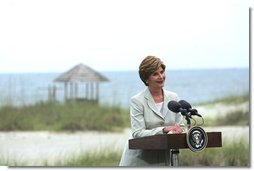 We had a wonderful meeting earlier. Each of us wanted to have the opportunity to expand upon the projects that our husbands are working on, their agenda for the broader Mid East. So we had today a woman from the Iraqi Governing Council, a woman from the Afghan Governing Council, an Iraqi Fulbright scholar and an American woman who started a scholarship program for Afghan women at American universities.

We had a very informal roundtable, where everyone could tell their stories and we could hear what their experiences are. And it was really very moving to hear what each one of these women's goals are for their country. A couple of them are over here with me.

One of them said -- and this happens to be the Fulbright scholar who's with us. She said, you know, when people think about Iraq, they don't think of the right thing. They're not thinking of 25 million people with hopes, with each one with their own hope for the future. And I think that's a good way for us to think about both Iraq and Afghanistan.

Our conversation focused on how we can help achieve the goals that our husbands are also working on for equality, for justice, for democracy. And we talked with these women about each of these issues.

Already, each of us are working in our own countries or in Afghanistan or Iraq or other parts of the broader Middle East and North Africa on issues that are important to us. Cherie Blair has met with judges and -- female judges and barristers in some of the Arab countries. Madame Chirac has started a hospital in Kabul, a women's and children's hospital in Kabul. All of you know how I've worked for years for literacy and have continued to work for education for the children and the women of Afghanistan in Iraq.

We've had a really great time with each other. We feel like we're always all in the same club. Our husbands are elected leaders of very prosperous countries and we feel a very sincere responsibility to help other countries because of the many advantages we have from being citizens of the countries that we're citizens of.

So I'll be glad to take any of your questions now. Any questions? What about one from Dallas?

Q -- the passing of President Reagan as well as the summit and all. And I understand both the President and his father will be delivering eulogies on Friday. Do you know, have they talked about what they might say, shared reminiscences or anything like that?

But all of us, certainly each one of us have thought about Nancy Reagan all this week, and about her devotion to her husband and her stalwart support of him always, and certainly through these last very, very difficult years. And I know how difficult being a caretaker of an Alzheimer's victim is, and I know how very difficult it was for her. And I know that I can speak for all of us when we send her our love and our very best wishes.

*corrected by the White House

This is an old program that many of you know about that write from cities around the United States. The sister city program that is a way for two cities to work together for economic development, for friendship, to have pen pals with each other, to try to have mutual understanding. So I'm really proud today to announce that these three American cities have joined with three cities in Iraq to be sister cities.

Q Mrs. Bush, I know that this is the first time in several years that the G8 has had a spouses program.

Q What prompted you to bring that back?

MRS. BUSH: Well, one of the things that prompted me -- and I'm so sorry, it's raining as I say this -- but one of the things that prompted me to invite them is I am so proud of Sea Island, Georgia, and how beautiful it is. I knew they would really think it was lovely and that it would be a good opportunity and the perfect setting for us to be together and to talk together in a spirit of fellowship and friendship. And also to invite the people we invited, to talk with them so we can figure out ways that we can help, by work in our own countries or by assisting them in their countries.

Q What are some of those ways that you talked about that you can help?

A Well, Paula Nirschel, who's here, right here, happens to be the wife of a university president, Roger Williams University, and she has a great story.

In January of 2002, when she was watching television and seeing the story of the women in the burkas in Afghanistan, she worried so much about them and thought so much about them and in the middle of the night one night, she thought, I can do something; my husband is the president of the university, I can get a scholarship for an Afghan woman here at his university; I have this whole network of university presidents all over the United States that I can write to. So she did.

And now 11 Afghan women are studying in different universities in the United States, because one woman thought she could help and figured out a way to do it. These women are on scholarships. Paula raises money so they can have extra money, incidental money to do whatever they need to with to supplement their scholarships. The United States government pays for the flights.

Q Do you still hope to visit Afghanistan this year?

MRS. BUSH: I do hope to. I don't know if I'm going to be able to go this summer.

MRS. BUSH: I think being First Lady is whatever the First Lady wants it to be. It can be a full-time job or, certainly, you could have another job outside of this. There is a true forum for the First Lady of the United States in our country, which is a huge opportunity for me, and I feel like a responsibility of mine, to talk about issues that are important to me while I have this forum.

Thanks, everybody. Thank you all very much.

And thank you all for joining me.