For Immediate Release
Office of the Press Secretary
June 8, 2004

THE PRESIDENT: It's my honor to welcome my friend and a strong leader, the Prime Minister of Japan, to Sea Island, Georgia. I've really been looking forward to this lunch because every time I meet with the Prime Minister, we have a constructive and important dialogue. 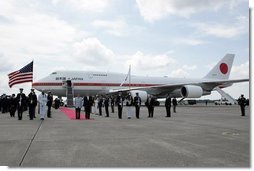 Today, I was very much looking forward to meeting with President Bush in order to discuss Iraq, North Korea, and those issues from a viewpoint of Japan-U.S. alliance in the global context. As the international community has to cooperate in order to reconstruct Iraq, I would like to pay respect to his strong leadership of President Bush in meeting this international coordination.

And also on the North Korea issue, President Bush has strongly supported the Japanese policy and we would like to - Japan and the U.S. would like to coordinate together, consult together in the issue of North Korea in order to come up with a peace in Korean Peninsula.

And in this difficult - even in the difficult and hard conditions, President Bush has shown his strong determination and commitment and he is a man of determination, so with President Bush we would like to maintain our Japan-U.S. cooperation in order to come up with peace and stability in the world.

THE PRESIDENT: Thank you. A couple of questions. Tom.

Q Mr. President, originally you had hoped that a U.N. resolution on Iraq would lead to more troops. Now, you're on the verge of getting that U.N. resolution and, yet, we haven't heard much about more troops - in fact, France, Germany, Russia and Canada have said they won't send troops any under circumstance. Have you pretty much given up on getting these allies to send troops, or is there still hope that you can persuade them?

THE PRESIDENT: First, I'm delighted that we're about to get a Security Council resolution. There were some who said we'd never get one, and it looks like if things go well, it will be a unanimous vote - thereby saying to the world that members of the Security Council are interested in working together to make sure that Iraq is free and peaceful and democratic. I think this is a very important moment on the - on making sure that our objective is achieved. 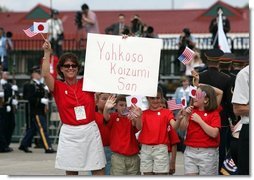 These nations understand that a free Iraq will serve as a catalyst for change in the broader Middle East, which is an important part of winning the war on terror. I expect nations to contribute as they see fit. But, of course, the key to long-term security in Iraq is for all of us to work together to train Iraqi troops to handle their own security measures. And that's precisely what we are doing on the ground, and we will work with other nations to do, as well.

Q Mr. President, there are a lot of remembrances about Ronald Reagan this week. What lessons have you learned from the presidency of Ronald Reagan? And have you modeled your political style after him at all?

THE PRESIDENT: Ronald Reagan will go down in history as a great American President because he had a core set of principles from which he would not deviate. He understood that a leader is a person who sets clear goals and makes decisions based upon principles that are etched in his soul - and our nation will miss him. I had the honor of speaking to Mrs. Reagan from Paris, France, and expressed Laura and my condolences to her and her family; and the nation will be doing so, as well, on Friday.

Thank you. Thank you, all. 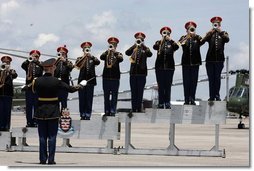