For Immediate Release
Office of the Press Secretary
June 8, 2004

PRESIDENT BUSH: I always enjoy talking to my friend, Vladimir Putin. He's a strong leader who cares deeply about the people of his country and understands the issues that we face. We just had a long discussion about a variety of issues. And I had the opportunity to thank him for working together on important issues such as the United Nations Security Council resolution. 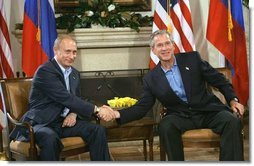 And it is my pleasure to continue to work with you as we make sure our relations are as close as they possibly can be.

PRESIDENT PUTIN: (As translated.) First of all, I would like to thank the U.S. President for having invited me to such a wonderful place. Indeed, we had a very thorough discussion which pertained to virtually the entire spectrum of the U.S.-Russia relationship.

I have congratulated the U.S. President with the positive change currently underway with the U.S. economy, which has to be acknowledged as his merit. And this happens with the background of the unreasonable growth for costs and pricing for the energy resources. We're all interested in these positive changes, because in the contemporary world of today, when we live, it is important for all of us that the U.S. economy improves, for the entire world - for Russia, included.

I'd like to point out the fact that our relationship has been developing all across the board, including such sensitive areas as the military cooperation.

Now, as regards the adoption of the United Nations Security Council resolution, without any exaggeration I would state that it is a major step forward. And I hope I will express the view which is held by all members of the Security Council that, indeed, we have witnessed a very constructive dialogue which was in progress over the past few days in this area. And this is not about passing a new document in the Security Council regarding Iraq. This is about a quality change in the status in Iraq and with regards to the presence of the military troops there. This is about a quality change of the impact the United Nations have over the situation in Iraq. Naturally, it will take quite a long time before this adoption of the document will have any impact on the real change on the ground in Iraq.

But we can convincingly and comfortably state that the situation is ripe for adopting such a serious and such a concrete document concerning this country. If prior to this document it was primarily the burden and the responsibility which was upheld by the United States with regard to this country, it seems now it will be the Iraqi government, themselves, who will have the whole spectrum of the sovereignty rights which will be enjoyed by them with a major influence now to be exercised by the entire world community with regards to the situation in that country.

Therefore, on this occasion, I would like to congratulate the U.S. President with this achievement and to express our wish that the situation is going to be changing in a better way there.