For Immediate Release
Office of the Press Secretary
May 28, 2004

President Discusses Iraq Sovereignty with Denmark P.M. on Friday
Remarks by President Bush and Prime Minister Rasmussen of Denmark to the Press Pool
The Rose Garden

PRESIDENT BUSH: Welcome, thanks for coming. It's always good to be with a friend. Friends are candid with each other, friends are open, and friends are constructive -- and that's the kind of conversation we've just and we'll continue to have. 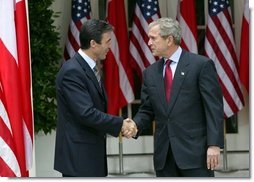 I spoke to Vladimir Putin this morning about the resolution, and we agreed to work together on behalf of the Iraqi people and the new government. I told him that we would come up with an arrangement that would enable us to help the Iraqi people secure their country, so that the country can move toward elections. I told him I would continue to work with countries around the world to build support for the new Iraqi government, so that the Iraqi people have a chance to live in a free and just society, just like we do.

I also want to thank the people of Denmark for their love of freedom, their support for human rights and the commitment of troops to Iraq. The moms and dads of those troops need to know they're performing brilliantly, Mr. Prime Minister; they're good, strong soldiers who bring great credit to your country. I'm proud to have you here, thanks for coming.

PRIME MINISTER RASMUSSEN: Thank you very much, Mr. President. I'm happy to be back in the White House. I'm here as a friend and ally. And today I have confirmed that the Danish troops will stay in Iraq. We will stay and finish our job. Our common goal is to assist the Iraqi people in building a new, modern and democratic society.

We have a lot of negative news from Iraq. What we need now are -- is some positive news. And I welcome the efforts to achieve consensus in the U.N. Security Council on a new Security Council resolution which can pave the way for the building of a democratic society in Iraq.

Finally, we have discussed the tragic events of prisoner abuse in Iraqi prisons. I welcome the assurance that these cases will be fully investigated, and the people responsible will be held accountable. And I welcome that the necessary steps will be taken to make sure that nothing like this will happen in the future. 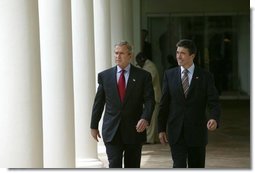 Finally, I would like to emphasize the importance of strength in transatlantic relations. In a few days' time, we will commemorate the 60 year anniversary of the Allied invasion of Europe. We owe a great deal to the United States and Europe. Thousands of Americans lost their lives in Europe in the fight against Nazi tyranny, in the fight for freedom. And let this commemoration also be a reminder of our shared values and shared destiny.