For Immediate Release
Office of the Press Secretary
May 25, 2004

THE PRESIDENT: I'm honored to shake the hand of a brave Iraqi citizen who had his hand cut off by Saddam Hussein. I'm with six other Iraqi citizens, as well, who suffered the same fate. They are examples of the brutality of the tyrant.

I am also here with Marvin Zindler, of Houston, Texas. I appreciate Joe Agris, the doctor who helped put these hands on these men; Don North, the documentary producer who made a film of this brutality, which brought the plight of these gentlemen to the attention of Marvin and his foundation. These men had hands restored because of the generosity and love of an American citizen. And I am so proud to welcome them to the Oval Office. 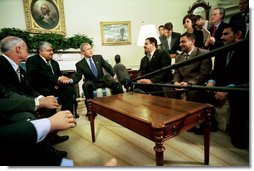 I assured them we have a plan to help Iraq achieve free elections. We'll transfer full sovereignty. They were pleased to hear that America will stay and help with security. We will continue to work on reconstruction matters. I assured them I will continue to ask the world to help. And they want to vote. They want -- they want to have elections. And they're going back to Iraq soon, and we're so proud to have them here in the Oval Office.

Again, thank you, sir, for coming.

MR. KADHIM: Thank you very much.

THE PRESIDENT: I appreciate you. Thank you. Please, be seated, and I'll answer a couple of questions.

Q Mr. President, can you say why General Sanchez is being replaced as the top commander in Iraq? Is that in any way related to the prisoner abuse scandal? And who is going to replace him?

THE PRESIDENT: Rick Sanchez has done a fabulous job. He's been there for a long time. His service has been exemplary. And the Defense Department will add further comments to it.

Mike, welcome. It's good to see you.

Q Mr. President, Chirac's office is quoted as saying that President Chirac told you that the transfer of power has to be real.

Q Can you describe what you may have said to him to reassure him that the transfer of power would be real?

THE PRESIDENT: Yes -- what President Chirac and others have said is they want to make sure that the transfer of sovereignty to the interim government is a real transfer. And that's what we want. We want there to be a complete and real transfer of sovereignty so that the Iraqi citizens realize the fate of their country is now their responsibility. And we'll be there to help. And we'll help in a variety of ways. We'll help by making sure our security forces are there to work with their security forces. We'll help to make sure the reconstruction money we have set aside is well spent. We'll help by getting -- to continue to work with other countries to help aid a free Iraq. We'll do what we need to do to help the interim government succeed in getting to the period of free elections. And I had a great conversation with President Chirac. We share the same goal, a free and stable and peaceful Iraq. 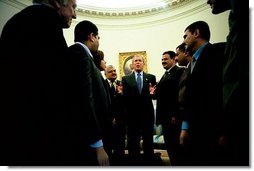 Q Mr. President, looking forward a bit to the elections that you'd like to see in Iraq, is it imperative for Iraq to end up with a democracy? Or are free elections enough to satisfy your aims at this point?

THE PRESIDENT: What's imperative is that the Iraqi citizens develop a constitution that they can call their own, a constitution written and approved by Iraqis. As I said last night, our intention was never to have Iraq look like America. Our intention is for Iraq to be free and stable and whole -- at peace with its neighbors. A free Iraq will help change the history of the greater Middle East. A free Iraq will show the rest of the world that when people are given a chance to raise their families in peace and security, a civil society that's stable and hopeful will develop. And that's what we want. We want a society where -- where the men who've suffered so much because of the whims of one brutal man -- where their children can grow up and realize their full potential, where the schools work, where the health care system is good. And there's no doubt in my mind that Iraq can achieve this great dream and vision. And there's no doubt in my mind, some day their children will come to America and say, thank goodness America stood the line, and was strong, and did not falter in the face of the violence of a few.

Listen, thank you all for coming. I'm glad to have you here.