For Immediate Release
Office of the Press Secretary
May 24, 2004

THE PRESIDENT: Thank you all for coming. Welcome to the Rose Garden, and congratulations to the 2003 WNBA Championship team from Detroit. That's who we're here to honor. (Applause.) It's good to welcome the coach. (Laughter.) I don't know if 20 years ago they would have thought of you as a coach. 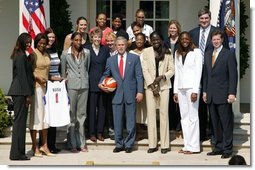 THE PRESIDENT: But he made a pretty darn good one, didn't he? I'm real proud of your leadership. I want to thank Tom Wilson for being here; Val Ackerman, here as well. I want to thank the players and the coaches for coming.

This is an historic season for the Shock. After all, you went from worst to first. Isn't that right?

THE PRESIDENT: And interestingly enough, in winning the championship, you drew the largest crowd in league history, which says something about the talent and the flare and the charisma of the players. I think one of the things that good teams do, is they decide to be a team. They come together and say, we're going to win as a team. And that's what this team did. There was tremendous discipline, hard work, and good leadership. And I'm proud of the fact, and I know the women on this team are, that you were coach of the year in the WNBA. (Applause.)

I said they came together as a team, but they had great talent. Ruth Riley was the WNBA Finals MVP, the Rookie of the Year was Cheryl Ford, and a member the 2004 Olympic team was Swin Cash. This is a team with talent, but learned to blend the talent for a greater whole.

They tell me that they changed the road there by the stadium to Three Championship Drive. Is that right?

THE PRESIDENT: It must be pretty intimidating for a team to pull up on Three Championship Drive to play.

I also appreciate most of all the fact that many of the players on this team are involved with helping others. I know there is a strong commitment to literacy on the team. These women understand that a child cannot succeed in America unless they can read. And I appreciate you taking your championship status and converting it into something really important in our society, besides winning basketball games.

Swin Cash and Ruth Riley have come to the National Book Festival. I know, because my wife was the founder of it, and she was most appreciative. I appreciate so much the Steps to Success program, which gives the players a chance to speak to children about nutrition and exercise and self-image. In other words, these players are mentors, as well as good players. They've achieved an interesting status: a championship status, and now they converted to helping somebody change their life, or somebody to be loved.

I appreciate so very much the McKeesport, Pennsylvania effort. Coach, when you had the whole team there to distribute 20 tons of food, I mean, that's a really fine example of what a champion means. 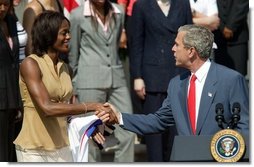 And so today it's my honor to welcome to the Rose Garden true champs -- great athletes, and really fine people. Congratulations, I'm glad you're here. (Applause.) 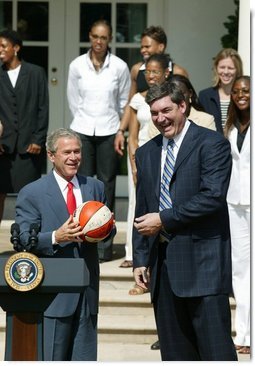