For Immediate Release
Office of the Press Secretary
May 19, 2004

PRESIDENT BUSH: Thank you for coming. You just interrupted a conversation about how we're working on a strategy to help the Iraqis become a free nation.

First I want to thank my friend, Silvio Berlusconi, for being here this evening. He's a man of good judgment, good advice, and he's a good friend. And after we have dinner, we're going to go to the Sons of Italy banquet tonight. 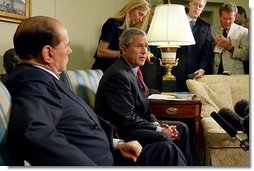 I also want to thank the Italian people for the great humanitarian mission that they're undertaking in Iraq. I appreciate their contribution to a free society in a part of the world that is desperate for freedom.

The Prime Minister and I have spent time working on a strategy that's based upon the following points: One, there will be a full transfer of sovereignty to an interim Iraqi government on June the 30th. That will be accompanied by a United Nations Security Council resolution. He had some very good ideas about what should be in that resolution. I, of course, listened to his good ideas.

We also talked about the need to make sure there is a security force to help the Iraqis move toward elections. It's tough work there now, because killers want to stop progress. It will be tough work after sovereignty is transferred, because there will still be people there trying to derail the election process. And that's why one of the discussion points we had was how to continue to broaden the coalition. And finally, we talked about how to make sure that Iraq does have free elections, as Mr. Brahimi has scheduled.

It's an easy conversation to have with Silvio, because we share values. We believe in human rights, human dignity, rule of law and the right for people to self-govern.

And so I'm proud my friend is here. I appreciate your leadership.

PRESIDENT BUSH: Thank you for your advice.

PRIME MINISTER BERLUSCONI: (As translated.) As far as I'm concerned, I'm very happy to be here, and I'm very happy to have had this discussion with my friend, President Bush, discussion on this plan, which is very detailed, in terms of the date, and is a very convincing plan.

As the President already said, within two weeks, or even probably before, by the end of this month, the Envoy of the Secretary General of the United Nations will indicate the names of the members of the interim government.

And something else that President Bush did not mention right now, but we discussed, is the possibility, opportunity of convening a meeting in New York, where your President should be invited and he should meet the members of the Security Council of the United Nations and the top representatives of the countries -- members of the coalition. And this in order to provide this government with an international legitimization which is not only useful for the international community, but mostly for domestic purposes for this government in Iraq.

And by the end of the July, there would be the possibility of setting up an electoral commission which will be formed and made up also of celebrities and personalities from United Nations which will help preparing the elections to be held in January. 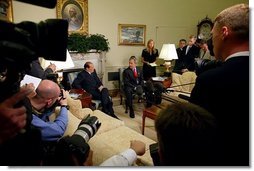 And we have discussed also other issues and over dinner will have the possibility of discussing additional initiatives which I think should be taken. Since I have the possibility and chance of talking to the President of the Russian Federation, Putin, and to Tony Blair and other leaders, I also submitted to President Bush the possibility of organizing an international conference on Iraq, which could be held before the elections in Iraq in January.

And I can say that we agreed on all of these future possibilities. And we fully share the strategy which needs to be followed. The West must defend itself against international terror. We are winning this battle if we remain united. Should we leave, abandon Iraq before a democracy takes hold, should we abandon it before this takes place, then we would leave this country to chaos and to a lengthy -- to many, many years of civil war, with thousands and thousands of casualties and victims, and this country would probably be a authoritarian country, a fundamentalist country, and certainly an exporter of terror.