For Immediate Release
Office of the Press Secretary
May 10, 2004

THE PRESIDENT: Thank you all for coming. Please be seated. Welcome. Thanks for coming to the White House.

Two years ago, I announced a new and hopeful approach in America's aid to developing nations. Under this approach, America has pledged to increase development assistance by 50 percent over three years. To make sure that governments make the right choices for their people, we link new aid to clear standards of economic, political, and social reform. We invited governments in developing nations to meet those standards so that they may truly serve their people. 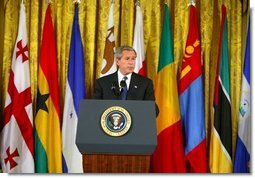 America formed the Millennium Challenge Corporation to oversee this new program. Last week, the first group of Millennium Challenge Account nations was selected. I congratulate representatives with us today from Armenia, Benin, Bolivia, Cape Verde, Georgia, Ghana, Honduras, Lesotho, Madagascar, Mali, Mongolia, Mozambique, Nicaragua, Senegal, Sri Lanka, and Vanuatu. You have chosen the path of reform, and your people and your nations are better off as a result of the decisions your governments have made.

I want to thank the Secretary of State for leading this effort. He is the chairman of the board of the new corporation. I appreciate other board members who are with us -- Secretary John Snow, the Secretary of the Treasury; Ambassador Bob Zoellick, the United States Trade Representative; Andrew Natsios, the Administrator of the U.S. Agency for International Development; and Paul Applegarth, who is the CEO of the Millennium Challenge Corporation.

Mr. Chairman, thank you for taking on this important assignment.

I want to welcome the ambassadors and representatives from the 16 Millennium Challenge Account nations. We are glad you're here. Congratulations.

I want to thank the members of Congress who are here. Two members have come today, one from the Senate and one from the House, who have been very instrumental in making sure the Millennium Challenge Account passed through both bodies. First, Senator Dick Lugar, who is the chairman of the Senate Foreign Relations Committee. Mr. Chairman, Senator Lugar is a clear visionary when it comes to U.S. aid. I appreciate you being here, Senator. Thank you for coming. As well as Congressman Tom Lantos, the ranking member. I see you brought Annette with you. Thank you for doing so. We're proud you both are here.

Congressman Lantos, do me a favor. When you see Jim Kolbe, who is not with us today, thank him for working so hard to make sure that the House appropriations process honored our request for the Millennium Challenge Account. But at any rate, I'm glad you're here. You guys are great leaders for -- to help America spread our vision of freedom and peace and decency for every human being.

In many nations, poverty remains chronic and desperate. Half the world's people still live on less than $2 a day. This divide between wealth and poverty, between opportunity and misery, is far more than a challenge to our compassion. Persistent poverty and oppression can spread despair across an entire nation, and they can turn nations of great potential into the recruiting grounds of terrorists. The powerful combination of trade and open markets and good government is history's proven method to defeat poverty on a large scale, to vastly improve health and education, to build a modern infrastructure while safeguarding the environment, and to spread the habits of liberty and enterprise.

The Millennium Challenge Account encourages all nations to embrace political and economic reform. The United States has pledged to increase its core development assistance by half, adding $5 billion annually by 2006. To be eligible for this new money, nations must root out corruption, respect human rights, and adhere to the rule of law. They must invest in their people by improving their health care systems and their schools. They must unleash the energy and creativity necessary for economic growth by opening up their markets, removing barriers to entrepreneurship, and reducing excessive bureaucracy and regulation.

The 16 nations represented here today have done all this and more. Each has worked hard to be here today, and their efforts are already yielding results. For example, Madagascar is aggressively fighting corruption. The Ministry of Justice has suspended a dozen magistrates on suspicion of corrupt activity. The government is also implementing an ambitious program of judicial reform. Senegal, Africa's longest-standing democracy, has also enacted new anti-corruption laws, and is implementing new measures to fight money-laundering. Honduras has made the improvement of education and health services a top priority. Its immunization rate of 96 percent is among the highest of all eligible countries.

The new government of Georgia has doubled its investment in health care and raised teacher salaries by two-thirds. Mozambique has curbed government spending and lowered tariffs. These, and other reforms, have resulted in double-digit growth rates over the last decade. Since launching its program of economic reform in 2002, Sri Lanka has reduced its budget deficit by a third, and cut inflation by half. Other nations represented here can point with pride to similar examples of progress.

Yet funding is not guaranteed for any selected country. To be awarded a grant, nations must develop proposals explaining how they will further address the needs of their people, and increase economic growth -- proposals that set clear goals and measurable benchmarks.

The countries selected today represent a small fraction of those struggling to emerge from poverty and establish reform. I urge all nations of the world to follow the progressive standards of governing justly, investing in people and encouraging economic freedom.

Reform can bring more aid from America, and it will also bring more investment and more trade, lessening the need for aid over time. Reform will be repaid many times over in the relief of poverty, and rising national wealth and stability for their countries.

The 16 chosen in this round are showing the way, are showing what is possible, are serving as a bright light in the developing world. You have taken the first courageous steps toward greater independence and greater wealth, and greater hopes for the people you serve.

I want to thank you all for being here. I congratulate you on your work. And may God bless your countries and the people in the countries. Thank you for coming. (Applause.)