For Immediate Release
Office of the Press Secretary
May 10, 2004

THE PRESIDENT: Thank you all for coming. Please be seated. Welcome back. The mighty New England Pats have returned, just like he told me they would. It's such an honor to welcome the team back here. I'm especially glad to see Tom Brady. I'm trying to figure out what it's like to be around a real celebrity. (Laughter.)

Bob Kraft is a owner who knows how to win. And congratulations on winning the Super Bowl. (Applause.) What I appreciate is the fact that in the contracts you sign with the players that you include a commitment to participate in at least 10 public service events each year. I appreciate the commitment. I also appreciate the players' commitment, as well.

I appreciate Sununu, the Senator from New Hampshire. He's a huge fan of the team, as is Ed Markey and Jim McGovern, people from the mighty Massachusetts delegation. We're proud you're here. Thanks for coming. (Applause.) Andy Card, the Chief of Staff here at the White House, is a longtime Patriots fan. He's constantly reminding me how great the Pats are, on a Sunday-by-Sunday basis. And Andrew Natsios, as well, is a Pats fan. Obviously, we've got quite a few here. If the Rose Garden were bigger, there would be a lot more people here, I assume. Welcome. I'm glad you're here.

The thing -- a couple of things impressed me. One, you never lost a home game. That's really good marketing. (Laughter.) That's a smart way to do it -- to fill up your stadium and have your fans go home happy every game. I watched some of your games. I appreciate the dramatic comebacks that you were capable of making. I like it when a kicker ends up winning the game. You like it when the kicker ends up winning the game. I know Adam is with us today. I am really impressed at how cool you are under fire, and how -- like, I need a few suggestions before a press conference, if you don't mind.

I also appreciate so very much the coach. I don't know what it's like in the locker room, but I remember when you were here last year -- or two years ago -- and you said you were going to say a few words and you said like four words. (Laughter.)

COACH BELICHICK: I got carried away. 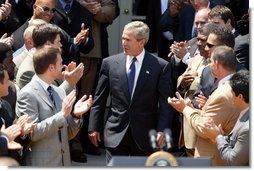 THE PRESIDENT: Yes, right. You got carried away. (Laughter and applause.)

Here's what I like about this team: They had a thousand hours of volunteer service to communities in Massachusetts and New England. That's a lot of hours for people who are spending a lot time practicing and reading play books. That is an unbelievably important example for champions to set for others. I know you supported the Boys and Girls Club and the Dana-Farber Cancer Institute, the Massachusetts 9/11 Fund, the ROSE Fund to end domestic violence. I really want to thank you for that. Listen, it's one thing to be a champ on the field, and obviously, that's what every player strives for. But to be able to be a complete person like you have been is really important. And you set such a good example of what it means to serve something greater than yourself.

I know there's a lot of fans that come to your game. You also know there are fans that are rooting for you who wear the uniform of the United States military - a lot of Pats fans out there who are scattered around the world, doing everything they can to defend us and to protect us. They are cheering in places like Afghanistan and in Iraq and in other countries. It is -- I can't tell you how important it is for them to see the action from home, to see the great players performing on the field of play. It's also important for them to know that our players care for them a lot, that they understand that we're grateful for their service, and grateful to their families, as well, for the sacrifices they're making.

We have got some unbelievable troops, fantastic men and women who understand -- (applause) -- people understand that they're serving something important, and that is security for our country, and peace and freedom around the world. And the fact that players are willing to serve their communities reinforces that service of our troops.

So thanks for what you do. Congratulations for getting back here to the Rose Garden. My hope, of course, is that I'm back here again to see you next year. (Laughter.) Your hope is that you come back. (Applause.) 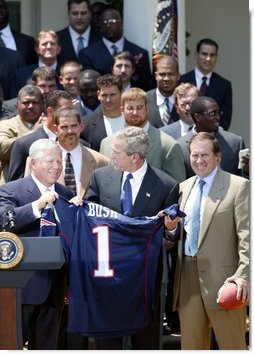