For Immediate Release
Office of the First Lady
May 10, 2004 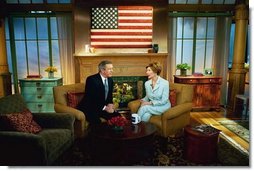 Q And she is here with us now. And we will get to education in a moment.

But as I mentioned at the top of the half hour, it is a tough time.

Q And we often ask about your husband's private thoughts. But given these pictures as they come out, as I say, a very hard time, I know, for him -- for us as a country.

MRS. BUSH: For us as a country.

Q How anguished is he?

And it's really, really sad. I mean, it's sad. I think we all agonize as each of those pictures come out and as we see them. It's a picture we don't want the rest of the world to have of us. It's not a fair picture of the United States military.

In fact, a soldier, of course, was the one who reported the abuses.

Q And so many people say, look, the vast, vast majority of our kids over there are good kids. They're doing a good job to help the Iraqi society.

MRS. BUSH: They are. They are.

Q But you wonder what this says about us as a society. We're only as strong as our weakest link. These are American kids in there doing this --

Q -- and it's what the Arab media plays incessantly over and over again.

MRS. BUSH: Sure. I mean, it's the picture they will try to put out of the United States. And we have to counter it with what the real picture is.

MRS. BUSH: I mean, when we look at what we've done in Iraq, where they have water, they have electricity, their schools have been refurbished. I'm working on building a children's hospital in Iraq. In Afghanistan, where little girls are in school for the first time in their lives because they've been liberated from the Taliban. I think all of those are the really good things that the United States military and the actions of the United States government have taken. And we need to remind the world of that as well.

Q But Secretary Rumsfeld warned us on Friday that these pictures are going to get worse. Do you know how much worse?

MRS. BUSH: No, no. I don't know how much worse. And to be perfectly frank, I can't bear to look at the ones that have been in the newspaper.

Q Does the President know?

Q Has he seen them? Has he talked to you about them?

MRS. BUSH: No, he hasn't talked to me. He told me some things about them. 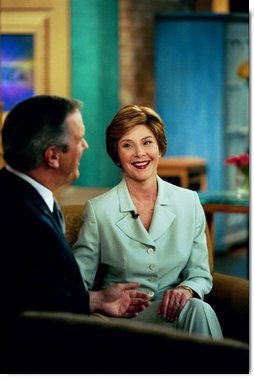 Q What did he say?

MRS. BUSH: I think I'll let -- see what happens if they come out.

MRS. BUSH: It's a terrible, terrible issue. But it is not a picture of the United States, and the American people know that.

MRS. BUSH: Sure. Absolutely. And it also makes our troops more vulnerable because those pictures are around.

This is the really good news about the United States of America, though. And that is, the pictures came to light. People will be prosecuted. Unlike under Saddam Hussein, where there were torture rooms and no one knew about them and they didn't come to light.

Q What's your reaction to it?

MRS. BUSH: Sad, really sad. Sad for the Iraqis who were harassed and humiliated, and sad for those women and men who committed those acts.

Q Let me turn to education. You have been a very outspoken supporter of No Child Left Behind, which is the President's main initiative in education. But you know it has come under sharp criticism, in many cases from teachers, that it's under-funded, that it's too rigid in the controls it puts on classrooms, and that it relies too much on testing.

Do changes need to be made in No Child Left Behind?

MRS. BUSH: I think No Child Left Behind is historic. It's really excellent legislation. It's not just a program of the President's; it's a law that was passed with very strong bipartisan effort, to really reform the education in the United States. And it in fact includes more money more appropriations than have ever been included in a federal education bill.

At the very first of this year, there were still about $6 billion left in the No Child Left Behind Act that states and school districts had not drawn down. So to say that it's under-funded is really incorrect.

It does have high standards and it has accountability, and that's the testing part of it, but that's such a very crucial part of it. You wouldn't go to your doctor and say, you know, I won't let you run any tests. You have to be able to diagnose problems that children have, you have to know which children have learned to read and which haven't, and if you're using a curriculum that really teaches children to read.

I think it's a very, very excellent piece of legislation and it will make huge changes in our country.

Q You have talked about the need to court teachers, to keep them in the business --

Q -- to make sure the teachers are better paid. I have a wife who is in education and I look at a lot of the chat rooms on the Internet, teachers talking to one another, and many of them cite No Child Left Behind as one of the reasons they're leaving teaching, because it is so rigid in what it requires of them.

MRS. BUSH: Well, I really don't believe that. I don't think that's one of the reasons teachers leave. I think teachers leave because they don't get as much pay as they can in other fields. Because teaching is so difficult, and it is very, very difficult. It's very challenging. But it's also very rewarding. And excellent teachers stay and work really hard with students. And every one of us remember a teacher who changed our lives in a great and positive way.

You're here to announce some grant recipients. What kind of grant is this?

MRS. BUSH: The Laura Bush Foundation for America's Libraries. And this is our second -- the foundation's second round of grants. We're giving awards to 136 school libraries nationwide in 46 states and D.C. and the Virgin Islands.

And so I'm here, going to Queens today to announce one. There are five schools in the New York City area that are receiving these grants. And the whole purpose of the foundation is to put more books, current, up-to-date, appealing books in school libraries in high-poverty neighborhoods.

All of these schools, all 136 that are getting a grant, 90 percent of the children -- students in the school are eligible for the free lunch or reduced lunch program.

Q You're probably the most famous school librarian in the country. My wife, who runs a school, says it's hard to find good librarians these days, because they have to be so computer literate.

MRS. BUSH: That's right. A whole lot of it is technology now.

Q Could you do it anymore?

MRS. BUSH: Probably couldn't. I'd have to go back for a refresher. (Laughter.)

Q One other question -- and I wish you well with the grants, and it's very important. I also mentioned parenthetically with pride, you were here to help us launch the Good Morning America Book Drive --

Q We've got 68,000 books out in Boston and Detroit so far, and we've got other cities to come.

Q Just before you go, though, I understand you don't particularly -- you're not crazy about the title, "First Lady"?

MRS. BUSH: Well, I mean, I just would rather be called Laura Bush.

Q You don't want to be called just "The First Lady," right? Why? The title is a long, historied title, obviously.

MRS. BUSH: I guess it is. I don't know, I just would rather be called by my name.

Q Good to have you here, as always. Doesn't feel comfortable still for me. (Laughter.) We were teasing her before we started, Laura Bush -- what was it we were teasing about --

Q Right. The First Lady Laura Bush, thanks very much.

Q Always good to have you here.