For Immediate Release
Office of the First Lady
May 1, 2004

MRS. BUSH: Thank you all for your warm welcome. Thanks also to President Padron, Dr. Vicente, Dean Mateo, Mr. Arjona, and distinguished trustees and faculty of Miami Dade College. Welcome also to the parents, to the family, to the guests and, of course, especially the class of 2004. (Applause.) 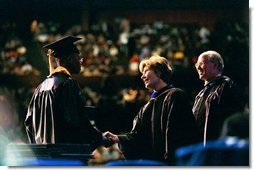 I'm sure that when some of you were studying social sciences in Professor Lenaghan's class, you never thought this day would come. After grading some of your papers, he didn't either. (Laughter.) Congratulations to the faculty of Miami Dade College. You've done a wonderful job of shaping the minds and the talents of this class.

Thanks also for the honorary degree you're conferring upon me today. I'm happy to become a member of the MDC family. But I have to admit, I feel a little undeserving in accepting this honor, since you've worked so hard for your degrees.

But I also work pretty hard. According to some kindergarten students who wrote to me, I have a very demanding job. Their teacher asked them, "What do you think Mrs. Bush does all day?" A little girl named Shelby wrote that she thought I help the President with his paperwork and then help him clean his office. (Laughter.) And she said then I take care of him when he's sick and put cold cloths on his head.

Shelby wasn't the only one concerned about the President's health. Megan said that I feed the dogs, I plant the daffodils and I do the President's speeches when he isn't feeling well.

On the other hand, Todd thinks that there's more manual labor involved in my job -- but that I always look good doing it. He wrote that I wear pretty suits and I shovel the snow and feed the birds. (Laughter.)

Of course, what I really get to do is to celebrate milestones like today. Class of 2004, thanks to your hard work, and to your professors and families, you've received a great education at this excellent school. Miami Dade College forms a strong link between two of our nation's top priorities -- education and employment. Colleges and universities bridge the gap between people's lives as they are and their lives as they want them to be.

No matter how different your backgrounds or your goals might be, or whether you're about to receive a certificate or a degree, you all have something in common -- you leave here better prepared for the future. I tried to remember the advice that my graduation speaker gave to prepare me. But I couldn't recall who gave the commencement address at the University of Texas in 1973. Maybe because that -- and I hate to admit it -- I skipped the ceremony.

But I did look it up and I found out who gave that commencement address. And you can imagine my surprise when I discovered that it was some guy named George Bush. (Laughter.) Four years after that speech, I married his son.

We never know where life is going to take us, but with an education, you have the opportunity to chart your own course. You've made great sacrifices to be here. Some of you worked two or three jobs while you were going to school. You missed birthdays, anniversaries, and family dinners. Many days, you've been the first one to leave the house and the last one to get home. But you never lost sight of your goal. You couldn't have done this without your family and your friends and your professors. But ultimately, you did the hard work. And your determination has brought you here today. Congratulations. (Applause.) 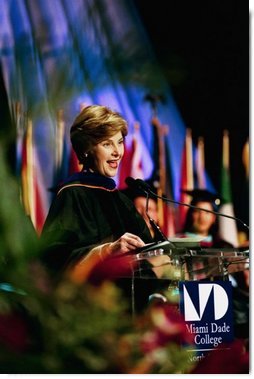 And as what that beautiful flag ceremony just showed us, you call nearly 80 countries home. But no matter where you were born or what you've done until now, today you emerge as a graduate --and as a different person. You emerge with the skills and the values to make a difference in your lives and in your community.

And that's what Frantz Moise plans to do. Frantz grew up in a small province in Haiti with his grandmother. She supported him the best she could -- even giving him the little bit of food she had while she went hungry. His mother, Marie, lived and worked at a factory in the capital. She sent money home every few weeks and she worked hard to send her three children to America so they could have the opportunity to go to school.

When he arrived in America, Frantz struggled with English. His friends told him to just a job, college wasn't for him. But his mother believed otherwise. She never finished high school or even considered college. Yet she insisted that Frantz have that opportunity. He joined Miami Dade's service learning program where he tutored elementary schools while earning his degree. He helped adult students and new immigrants learn English. After graduation, Frantz will study psychology at Barry University. He says, education is all that you have. It is essential to life. (Applause.)

Like Frantz, you've learned the value of education, but more important, you've learned who you are and who you can become. And today, you'll leave here with the ability to learn independently throughout your life.

Whether you're 22 or 102, education is a lifelong endeavor. just ask John Herrera. John said that I could find him in the crowd because he's the only graduate with white hair and a beard. John was born in Colombia and he moved to Mexico where he met his wife Yolanda. John dreamed of living in the United States but the only way he could receive a resident visa was by applying to beauty school. So he cut and styled hair and he made a home for his young family in California. He desperately wanted to go to school and he did briefly attend college. But with work and a new baby, his education took a back seat.

When his family moved to Miami, he started a successful business. He and his wife raised five children and sent four of them to college. After his children married and moved out, John sold his business and he finally had the chance fulfill his lifetime dream of going to school.

Today is just the beginning for John. He plans to continue his studies to become a physician's assistant. And he has plenty of support from his own children who love to tease their dad and say he can do better than a 3.8. (Applause.) John says, I'm the happiest I've ever been in my life. I can't wait to get up in the morning and to be surrounded by young, intelligent minds. Even if I don't go back to work, I just want an education.

John, I have no doubt that you will become a physician's assistant, but you're already an inspiration to all of us. (Applause.)

Like John and Frantz, each of you leave here better prepared to make a living and better prepared to live life. You are ready to achieve new goals and, like Ariel Lanier, you're ready to fulfill lifelong dreams. Ariel always wanted to be a physician, but his hopes of going to medical school were cut short when he was drafted by the Cuban army. Determined to become a doctor, he spent his free time working at a children's hospital while completing his mandatory year of military service. When his family moved to the United States, he worked full time at night so that he could go to class during the day. This fall, he'll study biology at the University of Miami and prepare to take the entrance exam for medical school. Ariel said, whatever I've done up to now and whatever I shall do in the future is to reach my goal -- a dream that I left behind once.

Education is fulfilling dreams for Ariel and also for children a continent away. One of the most inspiring places to watch the transformation education brings is in Afghanistan. Three years ago, 92 percent of girls did not attend school because the Taliban did not allow women to be educated. Last month, nearly 5 million Afghan children, including more than 2 million girls, began a new school year. At the newly opened Sultana Razia School, girls now talk about their future. One young girl said, I want to become a lawyer, because I want to bring justice and freedom to Afghanistan, especially for women.

And today in Iraq, children no longer have to recite a daily pledge of praise to a brutal dictator. They are discovering some of their country's best writers and poets in books once banned. Teachers no longer fear that the secret police are sitting in their classrooms to monitor their lessons -- and thousands of teachers are upgrading their skills in workshops. Saddam Hussein suspended the Fulbright scholarship program more than a decade ago. But today, Iraqi students like Barakat Jassem are once again recipients of the Fulbright scholarship. He's studying in America.

Barakat was a movie translator for the Iraqi National Television. He was sentenced by Saddam's son Uday to 13 days in prison because of a five-minute lapse in the translation of a film. The guards beat him when he arrived. And they did the same at their so-called going away party before he was released. Barakat still has scars, but he also has a renewed passion for learning and a strong desire to strengthen his country and the hopes of his people.

We're inspired by these stories of hope and progress. And I am inspired by each of your stories. Many commencement speakers try to give some grand life advice. But I don't have to do that for you. You are the advice I would give to others. But if you remember one thing, I hope it's this -- never cease to learn. Don't simply read books, devour them, and share them. In your wallet, put your library card before your credit card. (Applause.) Take a class just for fun -- whether it's creative writing or ceramics or cooking. And share what you've learned. When you receive your degree today, you're accepting responsibility to make our world a better place. You have the responsibility to inspire others to embrace education. Every one of you has a calling -- a calling true to yourself, and true to your aspirations. Answer that calling with the skills and values that you've learned here -- with determination and a continual quest for knowledge and an abiding faith in yourself.

Thank you for letting me share in this special day and congratulations to the Class of 2004. Congratulations. (Applause.)