For Immediate Release
Office of the Press Secretary
April 30, 2004

PRESIDENT BUSH: The Prime Minister and I will have some opening comments. We'll answer two questions per side.

Mr. Prime Minister, welcome. I'm glad you're here. I've really been looking forward to this meeting because I view it as a meeting between friends and allies. 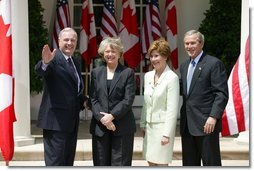 We've got a good friend in Canada. It's an important relationship; it's a crucial relationship; and it's one that I look forward to continuing to nurture with this Prime Minister.

PRIME MINISTER MARTIN: Well, thank you, Mr. President. We really did have a very, very good discussion. We discussed a wide range of areas, and we're going to continue over lunch. And we're doing it within the context of our shared values and the fact that we share much more than a continent. We talked about national security and Canada's new national security policy, which makes it very clear that we're going to defend the northern half of North America, and we recognize our responsibilities to those in the United States, with whom we share the continent.

We discussed a number of issues between us. We talked about -- we talked about the whole question of BSE, mad cow, and I must say that the President was very encouraging. We also -- (begins speaking in French).

We talked about Haiti. We talked about a wide range of issues. And I must say, Mr. President, that it's very clear that Canada and the United States, working together, we can make great progress.

Q Mr. President, 134 soldiers have died in Iraq this month, more than any other month. A year after you declared an end to major combat, are things getting worse in Iraq rather than better?

PRESIDENT BUSH: First, any time you talk about somebody who died in Iraq, or in Afghanistan, is a moment for me to thank them and their families for their sacrifice. And their sacrifice will not go in vain because there will be a free Iraq. And a free Iraq is in the interests of our two nations. A free Iraq is in the interests of world peace. Because free societies do not harbor terrorists; free societies do not threaten people or use weapons of mass destruction.

PRESIDENT BUSH: A year ago, I did give the speech from the carrier, saying that we had achieved an important objective, that we'd accomplished a mission, which was the removal of Saddam Hussein. And as a result, there are no longer torture chambers or rape rooms or mass graves in Iraq. As a result, a friend of terror has been removed, and now sits in a jail. I also said on that carrier that day that there was still difficult work ahead. 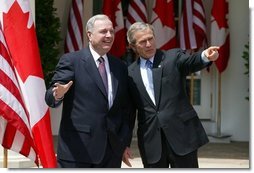 And so we're making progress, you bet. There's a strategy toward freedom. One of it, of course, is to continue to deal with those who are trying to stop the Iraqi people from realizing their ambitions of a free society. Whether it be in Fallujah, or elsewhere, we will deal with them, those few who are stopping the hopes of many.

There's a political strategy, and the Prime Minister and I will talk about that over lunch -- Mr. Brahimi's mission of putting together an entity to which we will transfer sovereignty. No, there is a strategy that will help us achieve the objective, which is a free and peaceful country in the heart of the Middle East that is desperate for freedom and democracy and peace.

Q Mr. President, you're a rancher. Is there any hope -- what hope can you offer your fellow ranchers in Canada about when the border might be open to live Canadian cattle?

PRESIDENT BUSH: As soon as possible. My administration is committed to a policy of free trade when it comes to beef. And we had a discussion about that today with -- that subject today, with our respective agricultural ministers -- or secretaries, as we call them here. And I assured the Prime Minister, I want to get this solution -- this issue solved as quickly as possible. And it's in our nations' interests that live beef be moving back and forth. It's also in the interest to make sure we make decisions based upon sound science, which he fully understands.

Q What is your reaction to photos of U.S. soldiers abusing Iraqi prisoners? How are you going to win their hearts and minds with these sort of tactics?

PRESIDENT BUSH: Yes, I shared a deep disgust that those prisoners were treated the way they were treated. Their treatment does not reflect the nature of the American people. That's not the way we do things in America. And so I -- I didn't like it one bit.

But I also want to remind people that those few people who did that do not reflect the nature of the men and women we've sent overseas. That's not the way the people are, that's not their character, that are serving our nation in the cause of freedom. And there will be an investigation. I think -- they'll be taken care of. 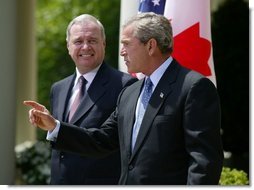 Q Mr. President, could you tell us what you'd like to see Canada doing on Iraq, both diplomatically and in terms, eventually, of getting possibly police and troops on the ground there?

PRESIDENT BUSH: My first answer to that is, I want to Canada to do what it feels comfortable doing in Iraq. That's -- and that's what I told the Prime Minister before. Canada is an independent nation. Canada makes -- will make its decisions based upon her own judgment. The Prime Minister shares my deep desire for there to be peace in the world. And to the extent that the country feels comfortable in helping that, we're grateful.

Canada is doing a lot in Afghanistan. Canada is doing a lot in Haiti. Canada is a contributor to reconstruction in Iraq. And I am grateful to be able to talk to a friend who shares the same goal, which is affecting behavior in a way that's based upon our values of human rights, human dignity, and freedom. And we've got no better partner in understanding the power of free societies.

And the Prime Minister -- I don't want to put words in his mouth -- but I think he shares that great sense of optimism and possibility. And it's good to have a friend who shares that with us.

Would you like to have the First Ladies come on up?

PRIME MINISTER MARTIN: I've got to say, though, I really do like sharing a press conference with you. You answer those questions perfectly. (Laughter.)

PRESIDENT BUSH: Thank you. Record that.

If you can give me just two seconds, I'm going to translate. They want it.

PRESIDENT BUSH: Listen, thank you all.

Come on up, Laura.

MRS. MARTIN: How do you do?

Q Will the next trip be down at the ranch, Mr. President, for the Prime Minister?

PRESIDENT BUSH: This is a nice place, but the ranch is even nicer. (Laughter.)

Q You need to teach him to ride. (Laughter.)

PRIME MINISTER MARTIN: I'll invite him to the farm.