For Immediate Release
Office of the Press Secretary
April 28, 2004

Welcome. Mr. Prime Minister, thanks for coming. We just had a really good discussion about common opportunities. The Prime Minister has got a clear vision about freedom and opportunity. And he's an optimistic person. He's optimistic that by working together we can achieve great things in the 21st century. We had a good discussion about bilateral relations. I reminded him there's a lot of Swedish Americans who are really proud of their heritage, proud of their home country.

PRIME MINISTER PERSSON: Thank you, sir. And let me also underline that we have had a very fruitful discussion, not least with the backdrop to improve strength for the transatlantic relations between U.S. and Europe. It's not only about security and foreign policy, it's also about economic relations and international cooperations, not least inside multilateral structures like United Nations. With that as a framework, we have covered a discussion about Iraq, Palestinian-Israel conflict, the situation in Afghanistan, also North Korea and European matters.

And thank you, Mr. President, for receiving me. As always, frank and friendly discussion.

Q Mr. President, is it going to take an all out military offensive to put down the insurgency in Fallujah? And can you really have a successful transfer of power in 60 days if Iraq is wracked by violence?

PRESIDENT BUSH: First, we will have a successful transfer of power. I assured the Prime Minister that the June 30th date is a solid date. And I appreciate so very much the work by the United Nations and Mr. Brahimi to lay the groundwork for the transfer of sovereignty.

Secondly, I have laid out a broad strategy that says that Iraq will be as secure as possible; that we will deal with those who want to stop the march to freedom. And that's exactly what's happening in Fallujah. Our commanders on the ground have got the authorities necessary to take action to help the Iraqi people realize a free and peaceful society. And what you must realize is happening in a place like Fallujah is, the closer we come to passing sovereignty, the more likely it is that foreign fighters, disgruntled Baathists or friends of the Shia cleric will try to stop progress. That's what's happening. They want to kill innocent life to try to get us to quit. And we're not going to. And our military commanders will take whatever action is necessary to secure Fallujah on behalf of the Iraqi people.

I'm pleased to -- I had a meeting with General Abizaid today. He's the commander in charge of the theater. He was reporting that there will be joint patrols with Iraqi police in Fallujah. Most of Fallujah is returning to normal. There are pockets of resistance, and we will -- our military, along with Iraqis, will make sure it's secure. 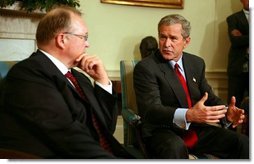 Q Mr. President, what will happen to the Swedish prisoner at Guantanamo Bay?

PRESIDENT BUSH: The Prime Minister -- the first matter he brought up was the Swedish prisoner. He was very forthright, very frank and very concerned about the prisoner. I told him we want to work closely with our friends. We have done so with other countries and we will do so with Sweden. There is a delegation coming over so that we can fully understand the facts and the consequences. But the Prime Minister made it clear he expects this to be resolved. I made it clear to him we want to work with him.

I think that's an accurate statement.

PRIME MINISTER PERSSON: It is.

PRIME MINISTER PERSSON: I think it's necessary to have that time to reply, because he has been there for two years. He should be released or brought to trial. That is the two alternatives, and we need to come to an end with this discussion. And I've expressed it clearly and had good response from the President.

Q Yes, thank you, Mr. President. What does Vice President Cheney bring to your 9/11 testimony that you couldn't provide alone? And don't you owe history and the 9/11 families a transcript or a recording?

PRESIDENT BUSH: What he's asking about is a meeting I'm going to have tomorrow morning, talking with this 9/11 Commission about -- my attitude and the attitude of the Vice President about our country, our security, what happened on that particular date, what happened leading up to that. And I look forward to the discussion. I look forward to giving the commissioners a chance to question both of us. And it's a -- it will be an ample -- it will be a good opportunity for people to help write a report that hopefully will help future Presidents deal with terrorist threats to the country.

PRESIDENT BUSH: First of all, we have the ability to not talk politics, but talk policy. We've been given great responsibilities and we spend a lot of time talking about our mutual desire for the world to be peaceful. And we understand that free societies are peaceful societies. 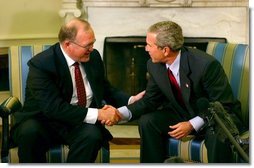 One of the great things about the Prime Minister is -- I don't want to put words in his mouth, he can correct me if I'm wrong, but nevertheless -- he has this great sense of optimism that people want to be free and that people have the ability to self-govern. And to me, it's a wonderful spirit and it gives us a chance to share our strategies about how to spread freedom.

But, no, our discussions -- we don't spend any time on politics, you'll be happy to hear. We spend time on what's best for our respective countries and how we can work together.

PRIME MINISTER PRESSON: We talked about all people's freedom and peace in the whole world, and then we touched upon some specific issues that is of mutual interest to us. We can discuss them because we are both democrats and we are both strongly in favor of freedom and building democratic institutions. That what's -- is what we have in common. And then, also, we realize that Europe -- and Sweden is a part of Europe -- and U.S. are interdependent and we need each other for the future good development of the world.