For Immediate Release
Office of the First Lady
April 23, 2004

MRS. BUSH: I'm so glad to be here today. I know most of you were in the roundtable so you know why we picked Snowden, why we came here to this school to talk about reading.

One of the points that I wanted to make specifically with this visit is what we can do with middle-age children -- middle age children? Is there such a thing? -- after those first three years or so in school, if they haven't learned to read, how important it is for schools to do interventions like this school does to make sure they do learn to read. 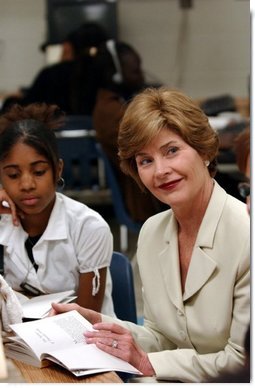 And part of the money that my husband proposed in the Jobs for the 21st Century Program includes money -- and this is in his 2005 budget proposal -- for striving readers. And that's what Dr. Lyon was talking about when he talked about kids who were in the fourth, fifth, sixth, seventh, eighth, ninth grade who have not learned to read.

And we know that by the time they're in the ninth grade, that's when kids start dropping out of school. Because it's by then, by the time you go to high school, almost 100 percent of your course work is dependent upon your reading ability. And these are ways -- what we've seen here at this school -- that we can help make students make sure they do learn to read.

And one of the students that I met didn't know how to read by the time he was in the sixth grade, and he's now the top reader in the eighth grade. Which shows that if we do intervene, if we make a real effort to find materials that older children are interested in, besides doing all the things that we talked about that are specific and systematic about teaching children to read with older students, they can learn to read and be successful. So I'm really excited to be here.

So I'm so glad to be here and I want to congratulate the principal, Catherine Battle, and all these teachers that were here. I also want to thank Reid Lyon from the National Institutes of Health for being here again with me. He's gone to other summits that I've hosted on early childhood reading, as well as the striving readers. And he's a great interview himself, if any of you are interested in how children learn to read. We have a lot of new research and that's what's very encouraging, about how people actually learn to read and what we can do systematically to teach children and adults to read.

Do you all have any other questions.

Q Mrs. Bush, when we were in there, of course a lot of the teachers were talking about different things they do in order to boost test scores and get students to read. What do you think are the problems that are keeping some of our schools, teachers, administrators from -- falling short? What are some of the problems? 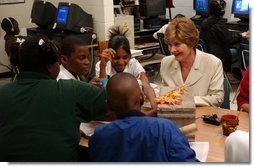 MRS. BUSH: Well, I mean the very same problems this school has. Which is, children with a very wide range of abilities. And it's not easy. Like Ms. Drew said, she has the checklist, a huge checklist to make sure every child -- the needs of every child are met, and that's very difficult. That's one of the hardest parts about teaching.

But one of the reasons they're successful is because they do constantly assess, so they can see if a child didn't learn that concept or this concept. And if they didn't, they can actually look at the way they taught it, just think maybe what I did was wrong, what the teacher did was wrong, and I should have done it, taught it in another way. But it also allows them to go back to make sure each child does have the skill that they need so they can move on to what the next skill is.

And that testing part of it, the assessment part of it, is so important. We'd never go to the doctor and tell the doctor they couldn't run tests. So to think that schools wouldn't run tests on children, they have to be able to test children so they can diagnose what the children's problems are and then adjust their instruction so that they can meet the needs of each of the children.

Q Mrs. Bush, what message do you want to give to the children themselves who are -- you know, some love reading but others just do not like it and are really struggling?

MRS. BUSH: Well, I hope -- and I think this is really important. I think we think -- all adults think when we send children off to school that they know what they're there for. But I think it's very important for parents and for teachers to clearly state what the goals are. One of the goals is for every child to learn to read.

And, you know, your goals are small when you're in kindergarten; you want them to learn the alphabet, you want them to learn the sounds that are associated with the letter, you want them to learn -- and this is something that all of us who were lap read, as Gary called it earlier, which means we were read to at home before we learned how to read -- know that you have to actually be taught. And that is, in English we read from the left side of the line to the right side, we turn pages the way we turn them. And those are all things that -- the actual idea that the printed word is the same as the spoken word, the symbol for the word that we're speaking. All of those concepts we think come naturally to children, but they don't necessarily.

Q Ma'am, you're going to a fundraiser after this. How is the campaign going in Tennessee? You had a fundraiser a week ago and you weren't expected to do a whole lot of campaigning in this state. But are you going to put more focus on Tennessee now? And if you are, why?

But I'm glad to have the chance to travel the country for my husband and to campaign for him. I wasn't in -- did you mean I was in a fundraiser in Tennessee last week?

MRS. BUSH: No, I wasn't. I was going to say, no, I wasn't last week. (Laughter.) But I'm really glad to be here to have that opportunity. And I'm also really glad to be here to talk about the success we've had with the No Child Left Behind Act and the challenges that we have, all of us as adults have in front of us because of wanting to make sure every child learns and every child does well in school. And then the chance to give an example to other schools in Tennessee and other schools around the country of a school who is really concentrating on making sure children learn to read and are being so successful at it.

Q Mrs. Bush, how specifically will you --

MRS. BUSH: The campaign is doing great. Thank you for asking.

Q How specifically will you use what you learned here with the successes here at Snowden to help other schools?

MRS. BUSH: Well, I actually talk about this a lot when I travel around the country. I talk about what I've seen, specific programs that specific schools are doing. I visited a school in Florida that was just a middle school, it didn't include the kindergarten through six like this school does.

And there, I watched a class, just like I watched Ms. Drew's class today. I watched a class where I saw children who didn't -- who had not learned to read yet being taught to read in a very specific and systematic way. And that's just another example that I talk about as I travel around the country.

Q Mrs. Bush, looking at the No Child Left Behind standards, do you feel or what do you think about the criticism that they may be too strict because a number of schools are falling short of those standards?

MRS. BUSH: Well, I don't think they're too strict. I think it's incumbent on us as adults to set the standards high because, you know what? If we do, kids will meet them. My husband uses that line, the soft bigotry of low expectations. In other words, if we don't expect some group or another group of children to do -- not to do well, we don't expect them to do well, they'll probably prove our expectations. And it's really important for us to set high expectations for all children because they can meet them. And we have to also set high standards for ourselves as teachers and as community members and as politicians and as legislators, people who write the policy. We need to have really high expectations as well.

Q Mrs. Bush, one thing that comes up in Memphis a lot is a lack of parental involvement. Is there any sort of recipe that you can give educators or parents to get them more involved in their kids' education?

So I think schools can certainly do what they can to help parents and every community group needs to try to figure out ways to reach parents to let parents know how important those years are when their children are at home with them. And they go by so quickly.

My girls are about to graduate from college and it just seems like yesterday they were sitting on my lap and we were reading books. So I want to impress that upon parents how fast their children grow up and not to waste those few years that you can have them at home with you.

Thank you all very, very much. Thanks a lot. (Applause.)