For Immediate Release
Office of the First Lady
April 22, 2004

MRS. BUSH: Thank you, Mary for your warm welcome. I always look forward to this lunch and to spending time with each of you. Special thanks to Lea Ann and to Cecile for organizing this beautiful lunch. Congressman Tauzin and Cecile are in our thoughts and prayers. Lynne Cheney and other cabinet member wives thank you for being here today. President Bush and I appreciate your and your husband's dedication to our country. And we appreciate the dedication of every member of the United States military, the National Guard and Reserve, and America's veterans like Joe Bartlett who is here today. I'm happy to hear that Janet Flower's son, P.F.C. Andrew Flowers is doing well. His eagerness to return to his unit in Iraq is evidence of his commitment and courage. 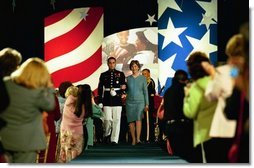 The President and I are inspired by the dedication of our men and women in uniform. We visit with soldiers at bases all over the world -- and perhaps one of our most moving visits was at Walter Reed Army Medical Center. One of the remarkable men we met at Walter Reed was Staff Sergeant Michael McNaughton. He stepped on a land mine near Kabul while serving with the Louisiana National Guard. His right leg had to be removed above the knee and he was fitted with a prosthetic leg. Michael had been a great runner and he and the President exchanged stories about their favorite past time.

President Bush encouraged Michael to get well so that someday they could take a run together. Sergeant McNaughton held the President to his promise, and last week they ran together around the South Lawn at the White House. Sergeant McNaughton is still working for the National Guard where he enlisted after September 11th because he said he "needed to do something."

The men and women of the United States military answer this call every day as they defend freedom around the world. Over the last year, the world has witnessed the skill and resolve of our military from Korea to Kosovo to the Middle East. We've seen their courage and their decency to the people of Afghanistan and Iraq. Our military men and women have helped to free fifty million people from the oppression of two brutal regimes. They are supplying villages with their first taste of clean water, delivering medicine and supplies to hospitals and schools. Our troops and their coalition partners have refurbished over a thousand schools so millions of children can study and learn again.

Our soldiers' compassion is not simply part of their mission -- it's part of their character. We will never forget their commitment to our country, nor will we forget the men and women who have fallen in service to America. All of those who serve in our military deserve our utmost respect -- and so do those who serve behind the front lines -- their families and children. As I've traveled to military bases, I've become aware of the special challenges that face military families. Like many families and like some of you, President Bush and I have moved a lot -- five times -- and we've lived in six different homes. Moving, packing and hoping our children will be happy in a new home is something many of us can relate to. And so is change. For us and for military families, change means moving and starting over; but it also means new friends, and new challenges. A military families' determination to make a home wherever they are matches their loved ones devotion to duty. Separation and transition are part of a military child's life, and they accept their duty with brave hearts.

There are more than one million military children around the world, and 800 thousand children go to public and Department of Defense schools in your neighborhoods. A military child may move as many as six to nine times from kindergarten to high school. By her senior year, a child will have attended six elementary and middle schools and two or more high schools -- often in different states. This constant change has a huge impact -- both academically and socially -- on children. Many school districts are not prepared to help military children transition from one school to another.

There is no systematic process that ensures that records, grades, and accomplishments transfer with a military child. And this is a problem for many children, not just military children, in our highly-mobile society. Many students lose their class rank after transferring, and many fall behind in class requirements because their new school will not grant credits for their previous coursework. Many children who were athletes at their old school miss the opportunity to play sports because they miss tryouts.

Some students, like Renee, deal with the challenge of not graduating. Renee lives with her sister and her sister's husband, a soldier. As a senior, she recently moved to her fourth new high school. Renee's new school has more graduation requirements. She must pass a test and have a year of computer science. Her new school requested that Renee's previous school grant her a reciprocal diploma. But the school refused. Renee is receiving special help and support from her new school, but she may not graduate on time. This is a common problem for many military children and their families. But it doesn't have to be this way.

When an Air Force officer was asked what he needed in Iraq, he said, "Please don't send cookies, care packages, or socks. Just help take care of our children." Our country has always supported its military -- in times of war there were community efforts to roll bandages and knit socks. We have a great capacity to care for the home front. Now is the time for a new Victory garden. In this garden, we can tend to the needs of military children. You can host a PTA group and talk about how your school can help ease transition for military children and families. You can volunteer at military bases and installations in your home states and read to children or host local events at libraries. Establish a parenting support program for military spouses in your neighborhood and help with home repairs and baby sitting.

The USA Freedom Corps started a program called "On the Homefront" to provide Americans with opportunities to support our troops and their families. More than a thousand volunteers from Rebuilding Together have repaired homes for military families while their spouses are deployed. With her two sons in Iraq, Marlyss Murray couldn't do all of the home improvements she needed. An army of volunteers in Tulsa helped Marlyss put a new roof and a fresh coat of paint on her home.

Volunteers from the Salvation Army in Cleveland, Ohio are collecting diapers and blankets to throw a group baby shower for military wives. And members of the VFW started a community-wide Adopt-A-Unit program to support military units in Iraq and Afghanistan.

We can show our appreciation for our troops and their families by getting involved in our communities. The members of the United States military pledge their lives to protect ours, and we can support them by supporting their loved ones. The Military Child Education Coalition is working to do just that. The coalition's founder, Dr. Mary Keller, works with schools and families to help military children with transition. While working as an Assistant Superintendent in Texas, Dr. Keller had more than 16 thousand students from neighboring Fort Hood in her school. She noticed that many of the military children who had transferred could not keep up. She gathered educators, military experts, and parents at her kitchen table and formed a coalition to help these students. She began as a volunteer and soon moved to working full time as Executive Director of the Coalition. Some of the funds from today's luncheon will benefit the Coalition. Dr. Keller can provide you with more information on how you can help military children -- children like Kiara who deserve not only a great education, but our support.

A sixth grade student in Louisiana, Kiara wrote a poem titled "I Serve Too." It reads, "I'm a military child, I stay strong when my dad goes away. If there is a war and my dad is detached, I will help him fight back. With my braveness and courage I can stay strong, my family's support helps me carry on. Whenever we move, I start over again, I have to go to a new school, and make new friends. Even though people think I'm a military brat, I just don't quite see it like that. My daddy helps defend our country, so we can live in peace and harmony. So all the military children help their mothers and fathers because we serve too, we're their sons and daughters."

With your help, we can fulfill our duty on the home front -- and the hopes of every military parent who prays "?help take care of our children." Thank you for this lovely lunch and for your generous contribution to the Military Child Education Coalition.