For Immediate Release
Office of the Vice President
April 6, 2004 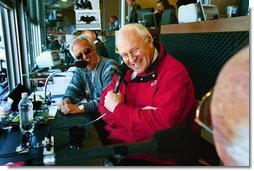 Interview of the Vice President by WLW AM
The Great American Ball Park
Cincinnati, Ohio
April 5, 2004

Q A 4 to 2 ball game, as we move on to the fourth inning. And we're very honored here in the good old radio booth at Great America Ball Park, a guy that can throw a strike, the Vice President of the United States, Mr. Dick Cheney. Mr. Vice President, welcome.

THE VICE PRESIDENT: Well, thank you, Joe. It's great to be here today.

THE VICE PRESIDENT: Well, I am. I don't get to do it as much as I'd like to. But I get a chance to get a day out at the ball park, and especially Opening Day here in Cincinnati, in a beautiful park, and the Reds and the Cubs -- hard to beat.

Q Cory Lidle goes to work, and the first pitch is grounded to second. Jimenez fields, tosses on to Casey, and quickly one way.

Of course, you and the President -- I have to ask you -- did you have a little wager on this afternoon?

THE VICE PRESIDENT: We did, and I haven't heard how he did yet. (Laughter.) So I'm waiting to find out.

Q Somebody said that he made the comment when he was talking about him being in St. Louis and you coming here, something about a radar gun when you threw your first pitch.

THE VICE PRESIDENT: Well, we had a lunch last week for all the Hall of Famers -- invited down to have lunch at the White House with us. And he explained I used to pitch for the American Legion in Wyoming. And I was going to throw out the opening pitch here, but he said they don't need to get the radar gun out. (Laughter.)

Q Your mechanics were outstanding, by the way.

THE VICE PRESIDENT: Well, thank you, I appreciate that.

Q And we all get embarrassed every now and then -- here's a line drive into right field. It will fall for a hit and go to the wall. And Michael Barrett will go into second base. He's going to try to get three out of it. They've got a play at third base on him, and it gets through, and he's in there with a triple.

We all get a little bit nervous -- and we've done it before -- the one thing you want is to not embarrass yourself out there and at least get the ball to the catcher.

Q Well, you couldn't have gotten better advice from a better guy.

THE VICE PRESIDENT: Jim is a great friend. We see each other all the time since he's in the Senate now. But he said, whatever you do, Dick, stay off the mound. (Laughter.) And that was good advice.

Q Is this a welcome break for you?

THE VICE PRESIDENT: It really is. I've got to go on tonight. I was in the White House this morning with the President. I've got a speech in New Orleans tonight, and I'll be back in the White House tomorrow. But, sure, to get a few hours out here at the ball park, it doesn't get much better than this.

Q Kerry Wood at the plate, and a diving jab at the ball and knocked down by Castro. If he doesn't touch it, Larkin fields it, a run scores and it's a 5 to 2 ball game. So if Castro doesn't touch the ball, Larkin is right there. But he doesn't know that.

Q We have the pleasure of visiting with the Vice President of the United States, Mr. Dick Cheney. We know you played football. You were an all-state football player in Wyoming. And you played a little bit of baseball, didn't you?

THE VICE PRESIDENT: I did. Yes, we played American Legion ball in Wyoming. But the last time I did that, I guess I was about 17 years old, so that was 45 years ago.

THE VICE PRESIDENT: I pitched and played third base. We didn't have that big a team. You had to double up.

Q Here's Grudzielanek with Wood at first base. No one out -- or one out, rather. Casey playing behind Wood. Now Grudzielanek backs away from the plate.

Q Do you get a chance to see much baseball? With the demands on your time and the position that you hold in this country, you've got Baltimore right down the road to see the Orioles, do you and Mrs. Cheney ever get a chance to go see some baseball?

THE VICE PRESIDENT: I get out, oh, maybe two or three games a year.

THE VICE PRESIDENT: That is about it. Yes, it will be opening -- like this, or maybe get the playoffs for a game. But it's hard. It's the nature of the beast in terms of the job.

THE VICE PRESIDENT: There will be plenty of time for it when we're through. That day will come.

Q Do you and the President ever discuss the Montreal situation?

THE VICE PRESIDENT: It's come up a time or two. (Laughter.)

Q A fellow by the name of Collins, I guess, has tried forever and ever to get a ball club to come into Washington, D.C.

THE VICE PRESIDENT: Yes. And ever since the Senators left, they've been trying to work it out.

Q I'd love to see a club go back to Washington. I really would.

THE VICE PRESIDENT: Me, too. It's a great baseball town.

Q A ball and a strike to Grudzielanek, and the stretch and the pitch: breaking ball drops in for a called strike, and a 1-2 count to Mark Grudzielanek. He is one for two this afternoon, has scored a run.

THE VICE PRESIDENT: Looks that way.

Q It sure does. (Laughter.)

THE VICE PRESIDENT: A lot of work going on, a lot of stuff happening around the world, and then, of course, the campaign on top of that.

Q Are you pleased with the way things look as far as the economy is concerned?

THE VICE PRESIDENT: I am. I think all the signs are headed in the right direction.

Q One-two pitch, swung on and missed. And Lidle picks up his second strike-out.

THE VICE PRESIDENT: And, of course, the employment numbers are looking good. We got those out last week. We've got some 400,000 jobs created here in the last couple of months, since the 1st of the year. So everything is, I think, moving in the right direction.

Q How you feeling? You look great.

Q I'm sure this lady back here has something to do with that.

THE VICE PRESIDENT: Yes, and I don't have as much fun as I used to. (Laughter.)

Q Well, I got to tell you, I enjoy you when you're on with Tim Russert.

THE VICE PRESIDENT: We've done that a number of times over the years, and Tim does a great job.

Q He really does.

Q He sure does.

Q Patterson to the plate. He takes, low and inside, a ball. Corey, a home run and was hit by a pitch. And he's scored two of the five Chicago runs. Lidle works, and Patterson a swing and a miss on a breaking ball -- way out in front. Now it evens, 1-1.

Q So now you're in New Orleans tonight?

THE VICE PRESIDENT: In New Orleans tonight, and there's a Senate race down there next year, or this -- come November. And as I say, I'll be back in Washington late tonight, and then be in the office tomorrow. I'm out on the road usually a couple days a week. And then on Friday, I take off for Asia for a week.

Q Lidle delivers, and Patterson a swing and a miss. And it's a 1-2 count to Corey Patterson.

Q Your impressions of this ball park?

Q I know you -- we've talked about Houston. You were involved with --

THE VICE PRESIDENT: Yes, with the new one down there, and of course a different style, structure, and so forth.

THE VICE PRESIDENT: This is a beautiful park. It's got all the amenities, great setting here, overlooking the Ohio River.

Q It really is. One, 2 count to Corey Patterson. Lidle ready. He delivers and it's taken in the dirt, blocked nicely by Jason LaRue. Count evens, 2 and 2.

THE VICE PRESIDENT: Right. Yes, I got -- they stood down there and watched me throw that pitch. (Laughter.)

Q Did they have any comment when you came off the field?

THE VICE PRESIDENT: They couldn't believe it. (Laughter.)

Q I'll tell you, Jim Bunning when -- I played against him.

THE VICE PRESIDENT: Sure.

Q And you talk about a competitor.

THE VICE PRESIDENT: He was. I served with him in the House of Representatives before he ran for the Senate.

Q Pitch inside, and the full count to Patterson.

THE VICE PRESIDENT: I see a lot of him now because my only real job is as President of the Senate, under the Constitution, so I have lunch up there every Tuesday. And I usually see Jim at those lunches.

Q Three balls, two strikes, two out. And now, Casey moves behind -- deeper behind Wood at first base. Lidle ready with the pay-off. He sets and delivers, and it's strike three, called -- gets the inside corner with the fastball. That takes care of things. The Cubs go down.

Q We want to thank you for being with us today. Not only on the field --

Q -- but also here in the radio booth. Give our best to President Bush, and we look forward to a very successful November.

THE VICE PRESIDENT: All right, we'll do it.

THE VICE PRESIDENT: And, Joe, thank you, too.

THE VICE PRESIDENT: Well, it's great to meet you. I had your card when I was a kid.

Q Oh, here it goes. How long ago was that? (Laughter.)

THE VICE PRESIDENT: All right?

THE VICE PRESIDENT: All right, good to talk to you. (Laughter.)