For Immediate Release
Office of the Press Secretary
April 5, 2004

THE PRESIDENT: I just met with Specialist Chris Hill's family from North Carolina. You know, I told the family how much we appreciated his sacrifice -- he was killed in Iraq -- and assured him that we would stay the course, that a free Iraq was very important for peace in the world, long-term peace, and that we're being challenged in Iraq because there are people there that hate freedom. But the family was pleased to hear that we -- its son would not have died in vain. And that's an important message that I wanted to share with you today. 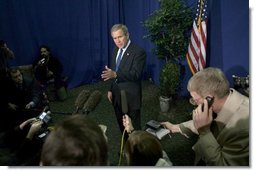 Let me ask you a couple of questions. Who is the AP person?

THE PRESIDENT: You are?

THE PRESIDENT: Who are you talking to?

Q Mr. President, in regard to the June 30th deadline, is there a chance that that would be moved back?

THE PRESIDENT: No, the intention is to make sure the deadline remains the same. I believe we can transfer authority by June 30th. We're working toward that day. We're, obviously, constantly in touch with Jerry Bremer on the transfer of sovereignty. The United Nations is over there now. The United Nations representative is there now to work on the -- on a -- on to whom we transfer sovereignty. I mean, in other words, it's one thing to decide to transfer. We're now in the process of deciding what the entity will look like to whom we will transfer sovereignty. But, no, the date remains firm.

Q Mr. President, are you concerned at all that events like we've seen over the last week in Iraq are going to make it tougher to meet that deadline, or increase pressure from the U.N. or anyone else?

THE PRESIDENT: Well, I think there's -- my judgment is, is that the closer we come to the deadline, the more likely it is people will challenge our will. In other words, it provides a convenient excuse to attack. In this particular incident, with Sadr, this is one person who is deciding that rather than allow democracy to flourish, he's going to exercise force. And we just can't let it stand. As I understand, the CPA today announced a warrant for his arrest. This is one person -- this is a person, and followers, who are trying to say, we don't want democracy -- as a matter of fact, we'll decide the course of democracy by the use of force. And that is the opposite of democracy. And it's -- that's why the CPA issued the statement they issued.

But, Stretch, I think throughout this period there's going to be tests. We were tested in Fallujah. And the desire for those who do not want there to be a free and democratic Iraq is to shake our will through acts of violence and terror. It's not only our will, it's the will of other coalition forces and it's the will of the Iraqi people. As you know, that many Iraqis have been targeted. As a matter of fact, the al Qaeda affiliate Zarqawi made it clear that part of the strategy was to turn Shia on Sunni by killing innocent Iraqis.

And we've got to stay the course, and we will stay the course. The message to the Iraqi citizens is, they don't have to fear that America will turn and run. And that's an important message for them to hear. If they think that we're not sincere about staying the course, many people will not continue to take a risk toward -- take the risk toward freedom and democracy.

Q Mr. President, can you tell us a little bit about your decision-making for the next ambassador to Iraq, and what you're looking for in the person who would represent the administration?

THE PRESIDENT: Good question. I am looking for somebody who can run a big embassy, somebody who understands the relationship between an embassy and the military. Because one of the things that's going to be very important for the next ambassador to Iraq -- this will be the person that takes Jerry Bremer's place -- will be the willingness and capability of working with a very strong -- a country in which there's a very strong U.S. military presence, as well as a coalition presence. This person is going to need to have enough experience to basically start an embassy from the ground up, and also be willing to transfer certain people and authorities from the CPA to the embassy itself. In other words, it's a very complex task that's going to require a skilled soul. And we're in the process of searching it out now.

Q Mr. President, can you just tell me -- the 9/11 Commission, the Chairman yesterday, Governor Kean, said a date had been set, I think, for your testimony and the Vice President's. Is that --

THE PRESIDENT: I would call it a meeting.

Q Has that date been set, and could you share it with us? And number two, can you tell us the rationale as to why you have chosen to testify or rather meet with them with the Vice President?

THE PRESIDENT: First of all, it will be a great opportunity from them to ask both of us our opinions on the subject. And we're meeting with the entire commission. I'm not exactly sure what the status is of putting out the date. I told them I'd meet with them at a time that's convenient for all of us, and hopefully we'll come to that date soon.

I look forward to sharing information with them. Let me just be very clear about this: Had we had the information that was necessary to stop an attack, I'd have stopped the attack. And I'm convinced any other government would have, too. I mean, make no mistake about it; if we'd had known that the enemy was going to fly airplanes into our buildings, we'd have done everything in our power to stop it. And what is important for them to hear, not only is that, but that when I realized that the stakes had changed, that this country immediately went on war footing, and we went to war against al Qaeda. It took me very little time to make up my mind, once I determined al Qaeda to do it, to say, we're going to go get them. And we have, and we're going to keep after them until they're brought to justice and America is secure.

All right, got to go to work. Thanks. Good to see you all.