For Immediate Release
Office of the First Lady
March 29, 2004

MRS. BUSH: It's nice to be back here in Orlando again. I was just here a couple of weeks ago with the President. But I'm especially glad to be here with these school board members from across the United States.

I know all of you in your towns and communities know that school board members are volunteers; they run for office. Then they're held responsible for every single thing that happens in every school district. It's a very difficult job and I want to thank all these school board members. 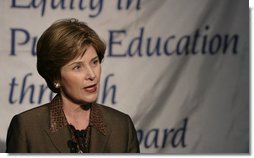 This speech gave me the opportunity to thank them for serving in their communities because what they do is so important. And it also gave me the chance to talk about No Child Left Behind and how important it is to our country. It's a central piece of education reform legislation, really the largest and most sweeping education reform legislation from the last 50 years. And it also includes the largest appropriation ever to school districts, elementary and secondary school districts, on the part of the federal government.

I'm very proud of the No Child Left Behind Act. I think it's very important and I think we're starting to see good results from it. The funds that go to Reading First, which are the funds that school districts can apply for to retrain teachers in all the new research-based instruction to teach reading. We are really starting to see some great results.

One of the great results that was printed in the newspaper last week were the results from Texas. We started the reading initiative in 1997 in Texas, including retraining all the kindergarten, first and second grade teachers and now we're really seeing the benefits of that training and that focus on reading.

And, of course, we focus on reading, because if you can't read, you can't do any of your other subjects, you can't read history, you can't read science. Most of the kids who drop out of school in the 9th grade or 10th grade drop out because they're so frustrated because they've made it through the entire -- that many years of school without learning to read. And by the time you're in high school, about -- almost 100 percent of your school work depends upon your reading ability.

So it's fun to get to thank these school board members, to get to be here to talk about ways we can work together to affirm our commitment to American students.

Do we have any questions?

Q -- maybe we'll all get equal education, but maybe not. And how can I be guaranteed that my kids won't be the ones left behind?

MRS. BUSH: Well, I think that's part of what the No Child Left Behind Act is. And that includes testing and accountability. I don't know if you know that this is part of the No Child Left Behind Act, but parents can call their school, their child's school, and actually receive the results of the testing, the accountability testing. Not -- maybe they can receive their own child's scores, but they also can know how other children did in their school district, so they will know whether or not their school is succeeding.

But it also requires the work of all of us, of all community leaders, of all parents, not just the teachers, not just the principals or the school board members, but all of us working together to make sure our schools in our community are providing the best possible education for every single child, and that's a very important part of it.

Q And specifically as it relates to reform, what now compared to what we didn't do before that's making such sweeping changes to make a difference?

MRS. BUSH: Well, the focus on reading, the money that goes with teaching, reading with the new science- and research-based methods that show how -- there's a lot of new research that shows how children actually learn to read. And teachers are being trained with this new research so they can make sure they're teaching with the best methods to students.

But also, they are spending more time on it, it's more of a focus. Because of the testing, you know how your students are doing, you can see if your child has a problem that -- if you're a teacher, if one of your students has a problem, that means you need to spend more time with that student or you need to adjust your teaching so that student can learn. All of that is new.

Every state, for the first time in history, has an accountability program that has been approved under the No Child Left Behind Act. States devised the curriculum they want their students to learn, and then they've devised the test that covers the curriculum they want students to know. So there are a lot of pieces in it that I think will make a really huge difference.

But as I said in the speech, children are in school such a short time, it's incumbent upon all of us, upon teachers and principals and school board members, but all of us including the media to make sure students get the best education they can possibly get.

Q You mentioned at the tail end of your speech that this is not a fix all.

Q There are some local school districts here in central Florida that are having trouble meeting the requirements. What should they do and what do you think needs to be done?

MRS. BUSH: One of the things, and I think this is what Secretary Paige is talking about now, when the school was -- when the No Child Left Behind Act was written, it was written with some flexibility in mind, knowing that you've got a sweeping education reform bill but you have to see how it really will translate when students and teachers and principals start trying to put it into effect. And because it was written that way, the Education Department was allowed to make regulations or to change regulations. Rather than rewriting the law, they actually had regulations that they could change to let school districts say, this isn't working because of whatever reasons and then to change some regulations, and that's what he is talking about.

I said it was not a one size fits all. And part of that is because the bill is really based on the idea that local people should be the ones who are making the decisions for their children. And because of that, school districts and states devise their own curriculum, what they want students to have; it's not a national curriculum. They devise their own test over the curriculum that they want their students to learn. And so that makes it not one size fits all, but really up to individual states and school districts.

Q Mrs. Bush, I was wondering if you could talk about whether the past week has been difficult at the White House, given the criticism from Richard Clarke and the pressure from the September 11th Commission for Condoleezza Rice to testify?

MRS. BUSH: Well, I think it's very important -- the September 11th Commission is very important. It's not political, though, and it should not be politicized. It's for us to find out in our whole country what we can do to make sure it doesn't happen again, and to make sure the people in the United States are safe and secure. And that's the goal of my husband, I know, and his whole administration.

And if the implication was that my husband in some way does not take his role seriously, it's just absolutely wrong.

Goodbye, everybody. Thanks. Are most of you education reporters?

Q No, parents of kids in schools.

Q Here in Florida, as you probably know, most kids in schools did fail in --

MRS. BUSH: Well, I don't see it that way. I think it's a very important standard for parents to look at about the schools where their children are, and to really make sure schools are doing the best they possibly can. There's money -- there's still over $5 billion left in the No Child Left Behind Act that has not been drawn down by states.

Now, part of the reason for that is that they have to submit certain plans or strategies to get the grants to draw the money down, and it takes time for school districts to do that. It also takes time for school districts to retrain teachers, and that will be a big part of making sure schools are adequate once they start to retrain groups of teachers.

So I hope that people will give their school districts the benefit of the doubt. But I also hope that people will know and demand to know whether their school districts are making a real change, if they're really looking at the way they're teaching, if they're really trying to examine the way they can help children the best they possibly can. And I think that's what will happen.

Thanks you all. Thanks a lot. Good to see you all.