For Immediate Release
Office of the Press Secretary
March 23, 2004

THE PRESIDENT: Thank you all for coming. We've just had a very constructive Cabinet meeting. We talked about the need for us to remain strong in the war on terror. I assured our -- my team that America is not going to blink in the face of the attacks that took place in Spain. As a matter of fact, we'll continue to rally the world to fight off terror. 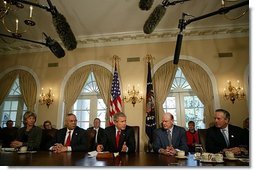 Here at home, my economic advisors, economic team presented a very upbeat assessment about our economy. It's strong, and it's growing stronger. Inflation is low. Interest rates are low. Manufacturing activity is up. The job base is growing. There's a lot of signs that the economic plan we put in place are working. There's more work to do.

In order to make sure the economy continues to grow, in order to fight off economic isolationism, we've got to work to control the cost of health care, which makes it awfully difficult for many small businesses to provide health care for their employees. We need an energy plan. The Secretary of Energy discussed the need for an energy plan. We need to make sure that we have legal reform. Junk and frivolous lawsuits make it awfully difficult for people to find work here in the United States. We need to make sure that the regulations at the federal, state and local level are absolutely necessary. And finally, we need to make sure the tax cuts are permanent. Tax relief has stimulated economic growth, and they need to be permanent. And I call upon Congress, once again, to, at the very least, make sure the child credit, the marriage penalty, and the 10 percent bracket are made permanent now so that people can plan -- consumers can plan and small business owners can plan.

I'll answer two questions here today. Tom, wherever you are.

THE PRESIDENT: Yes, right there.

Q Mr. President there's been a lot of attention over the last couple days to a book written by your former counterterrorism advisor that suggests that you understated the threat of al Qaeda before September 11th, and then rushed to blame Iraq after the terror attacks. Is there any basis at all in any of these allegations? And do you agree with the Republican Senator Chuck Hagel that the White House needs to take these charges more seriously and not just undermine Mr. Clarke's credibility?

THE PRESIDENT: Well, the facts are these: George Tenet briefed me on a regular basis about the terrorist threats to the United States of America. And had my administration had any information that terrorists were going to attack New York City on September the 11th, we would have acted. We have been chasing down al Qaeda ever since the attacks. We've captured or killed two-thirds of their known leaders. And we're still pursuing them, and we will continue to pursue them so long as I am the President of the United States.

I want to thank the troops involved. We've got a couple of thousand troops involved in Afghanistan that are hunting down al Qaeda in that part of the world. We've got intelligence officers all over the world collecting information so that we can act. We've got a strong network of cooperative governments trying to chase down terrorist money and to prevent that money from being spread around to cause harm.

I was on the phone today to Gerhard Schroeder, reminding them that we need to stay strong in the fight on terror. And I appreciated his strong comments today by phone, that he fully understood the stakes. We're making progress. There is more work to do. And this country will stay on the hunt. The best way to protect our country from further attack is to find the terrorists before they come to our homeland, or anywhere else, to inflict harm.

Q Yes, sir. Thank you, sir. Are you worried about the threat from Hamas to attack U.S. targets over Israel's killing of Sheik Yassin? And were you troubled by his killing?

THE PRESIDENT: Yes, I'm worried about terrorist groups targeting America. And we take every threat seriously in this administration. Nearly every morning that I come to work, I talk to George Tenet, FBI Director Mueller and others about the threats to the United States. And there's still serious threats because of what we stand for. There are still people who want to harm our country. And so -- whether it be an Hamas threat, or an al Qaeda threat, we take them very seriously in this administration.

As far as the Middle East, it's a troubled region, and the attacks were troubling. There needs to be a focused, concerted effort by all parties to fight terror. Any country has a right to defend itself from terror. Israel has the right to defend herself from terror. And as she does so, I hope she keeps consequences in mind as to how to make sure we stay on the path to peace. This administration is committed to finding a two-state solution -- a two-state solution for the good of Israel, a two-state solution for the good of the Palestinian people. To this end, if the circumstances on the ground allow, I'll be sending a team back out to the Middle East next week to see if we can't keep the process alive, the process toward peace.