For Immediate Release
Office of the Press Secretary
March 17, 2004

THE TAOISEACH: Mr. President and First Lady, on behalf of the government and the people of Ireland, I'd like to extend our best wishes to you, and to all of the distinguished guests gathered here for St. Patrick's Day. I'm delighted to be here with you on the 17th of March, the actual day when millions of people of Irish descent across the globe unite to honor their native land and their common heritage. 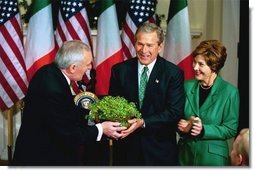 Today we are reminded in a special way of the close and abiding friendship that has existed between our two nations for so many centuries. The United States has been a stalwart supporter of Ireland in good times and in bad. And during the darkest days of our history, America provided the promise of a new future for the millions of Irish compelled to leave their native homes because of famine and of poverty.

In building a better future for themselves in this country, Irish immigrants and their children were given the opportunity to make a meaningful contribution to their new communities, and to become vital and valued members of American society.

The United States, Mr. President, has been unfailing in its encouragements to our efforts to find a lasting and peaceful settlement in Northern Ireland. We thank you, Mr. President, for your continued and strong commitment to the implementation of the Good Friday agreements. We appreciate the support and encouragement that we have consistently received in your administration, from our friends on both sides of the aisle in Congress, and from so many ordinary Americans, who wish to see us succeed.

When I signed the Good Friday Agreement some six years ago, I believed that we had the potential to transform relationships on the island of Ireland. Today, based on the progress that we have seen at firsthand, I'm more convinced than ever of this. The priority now is to overcome the remaining challenges and finish the job once and for all. Prime Minister Blair and I are, therefore, redoubling our efforts to resolve those issues that remain outstanding so that the promise and the potential of the agreement can be fully realized. We've invested enormous efforts in building our peace process, and we intend to protect and preserve it together.

Mr. President, the United States has been a key partner in the significant economic development that Ireland has enjoyed in recent years. America is Ireland's biggest foreign investor, and we share a common approach to the values of enterprise, and we work well with each other. Because of this partnership, Ireland's future looks brighter and more prosperous than ever. The opportunities that Irish immigrants once sought abroad are now to be found in Ireland. And for the first time in over 150 years, the number of those emigrating from our country has slowed to little more than a trickle.

Mr. President, Ireland is proud to hold the presidency of the European Union at this time. I look forward to welcoming you to Ireland for the EU-U.S. Summit at the end of June. And during our presidency, we will see 10 new countries, eight of them from Eastern Europe, join the union on May 1st. Like Ireland, many of these accession states already have historic ties with the United States and have large immigrant communities living here. The enlargement of the European Union will serve to strengthen the strong ties that already exist between Europe and the United States.

Mr. President, Europe and the United States share a common determination to overcome the evils of terrorism. Last week, we witnessed the willful destruction of human life in Madrid. Many were reminded of the horrors 9/11. Terrorism is an affront to our democracies. It strikes at the heart of all the values of which the United States and the European Union are founded. And we're determined to ensure that our peoples are protected from this despicable scourge. As we celebrate here today, our thoughts and our prayers are also with the people of Spain.

Mr. President, St. Patrick used the symbol of the shamrock to explain a basic principle of Christianity to the people of Ireland. More recently, we have come to regard it as a symbol of unity, conveying a powerful image of how people of diverse traditions and backgrounds can come together in the pursuit of a common cause. It's an emblem that Irish people, indeed, friends of Ireland wear with great pride on this special day.

I present this gift of shamrock to you, Mr. President, this morning as a token of our friendship and an acknowledgment of the special bond that exists between our two countries.

(The bowl of shamrock is offered.) (Applause.)

THE PRESIDENT: Well, Taoiseach, thank you very much. Thanks for the lovely gift of shamrocks. It is a beautiful symbol of a beautiful land. Laura and I welcome you back to the White House. We're honored to have you join us to celebrate St. Patrick's Day.

This day is always a happy one for Americans. In some places, Americans get a little too happy. (Laughter.) Today, we reaffirm the bonds of friendship between our countries. We remember a courageous man who preached a gospel of peace. We celebrate a heritage that is claimed by millions of my countrymen. There's an Irish saying that there is luck in sharing. For more than two centuries, your country and mine have shared responsibilities. We've shared aspirations, and we have shared values.

From my nation's earliest days, Americans of Irish descent have helped to establish and define America's most cherished principles. They've helped to defend the liberty of their adopted homeland. Today, the people of the United States and the people of Ireland continue to share so much. Our economies are more closely linked than ever. Together, we are fighting terrorism, a danger that has brought destruction and grief to Americans and Irish alike, and to the world.

I join the Taoiseach in sending condolences to the people of Spain as they remembered their murdered countrymen. I thank you for your strong support in our common struggle.

Our nations are also standing for peace and justice in places like the Balkans and Afghanistan and beyond. We share a common vision for Northern Ireland. We seek a lasting peace for the people of Northern Ireland, a peace that will allow people to live free of terror and intimidation.

We seek a region that is stable and prosperous and tolerant and locally governed. I commend Prime Minister Ahern and Prime Minister Blair and all of those who are working so hard to implement the Good Friday Agreement. I call for a permanent end to all political violence. There's no place for paramilitaries in a democratic society. The partnership of America and Ireland is close, it is lasting, and it is important to the peace of the world.

I look forward to this summer to visiting Ireland for the EU and U.S. Summit, to strengthen the essential partnership between the United States and Europe. Taoiseach, may the friendship between your people and mine prove as strong in the years to come as it has in the centuries past.

May all the people of our nations have a happy St. Patrick's Day. We ask God's blessings on the people of Ireland. And may God continue to bless the United States. Welcome. (Applause.)