For Immediate Release
Office of the Press Secretary
March 12, 2004

President Bush Honors Victims of Bombings in Spain
Remarks by the President to the Spanish and American Press Pools Embassy of Spain
Washington, D.C.

THE PRESIDENT: Mr. Ambassador, thank you for having Laura and me here during this solemn occasion. The United States of America sends our prayers and sympathies to the Spanish people, who mourn the loss of life, who today weep for their loved ones, who wonder about their future now that there's been such tragedy. 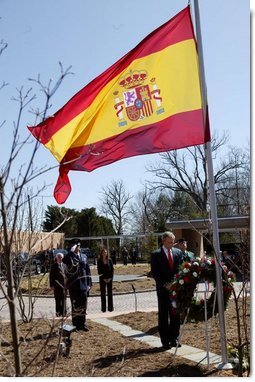 The bombings in Spain are a grim reminder that there are evil people in the world who are willing to kill innocent life. I appreciate so very much your government's strong stand against terrorism and terrorist organizations like ETA. The United States of America stands firmly with you as we work to make the world more peaceful and more free.

Killers try to shake our will, they try to shake our confidence in the future. Spanish people will stand firm against this type of killing, and they'll have a friend with the American people. So Mr. Ambassador, we ask for God's blessings for the people of your great country.

Thank you very much for having Laura and me here.