For Immediate Release
Office of the Press Secretary
March 11, 2004

THE PRESIDENT: Today I spoke to His Majesty the King of Spain -- Jose Maria Aznar, as well -- about our country's deepest sympathies toward those who lost their life as a result of terrorist bombings in Spain. I told him we weep with the families. We stand strongly with the people of Spain. I appreciate so very much the Spanish government's fight against terror, their resolute stand against terrorist organizations like the ETA. The United States stands with them. Today we ask God's blessings on those who suffer in the -- in the great country of Spain. 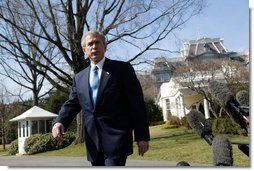