For Immediate Release
Office of the Press Secretary
March 9, 2004

THE PRESIDENT: Congratulations. Good job. (Applause.) Thank you all very much. Welcome. I'm really glad to be invited back to this annual event to recognize excellence and to bestow an honor named for a great American.

This year, the Malcolm Baldrige National Quality Award goes to seven outstanding recipients. Each set ambitious goals; each organization worked hard to achieve them. You're setting such a good example as a beacon of excellence. You represent the great strength and the entrepreneurial spirit of the American economy. I congratulate you for a job well done. (Applause.) 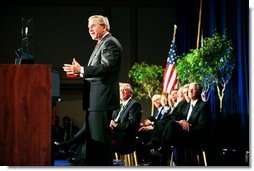 And I appreciate Secretaries Evans and Paige for joining me here, and thank them for their service to our country. I thank Dr. John White, the University of Arkansas Chancellor. I appreciate the fact that he didn't bring up the Arkansas-Texas football score. (Laughter.) I thank Letitia Baldrige for being here, Mac's favorite sister -- only sister? Yes. (Laughter.) I want to thank those of you involved with the Baldrige Award. I want to thank you for keeping the spirit alive. I want to thank you for focusing on quality; thank the judges and the foundation members.

I appreciate the members of Congress who are here today. I'm glad you all have taken time to come to honor the recipients. I want to thank the U.S. Army Band for providing quality music. (Applause.)

Malcolm Baldrige served as the Commerce Secretary in the '80s, at a time when many questioned whether America could remain the world's strongest economy. He was an optimistic guy. He dedicated himself to proving the skeptics wrong. That kind of confidence in America's economic strength was justified in his day, and it is justified in our day. (Applause.)

Think about what this economy has been through the last several years. In 2000, the stock market began a steady decline. By early 2001, the nation was in a recession. Then we got attacked on September the 11th. We had to face the consequences of that attack. We saw scandals in corporate boardrooms in which the trust of workers and investors were violated. We took action to face all these challenges, and today our economy is strong, and it is getting stronger. (Applause.)

Think about the economic environment of 2003. Inflation is low; interest rates are low; manufacturing is up. Home ownership is at an all-time high. Stock prices are up. The stock market wealth has risen by more than $3 trillion since the beginning of 2003. The unemployment rate today is lower than the average rate in the 1970s, the 1980s, and the 1990s. Thanks to our productive workers and the entrepreneurial spirit of this country, the fastest growing, major industrialized economy in the world is the United States of America. (Applause.)

As our economy moves forward and new jobs are added, some are questioning whether American companies and American workers are up to the challenge of foreign competition. There are economic isolationists in our country who believe we should separate ourselves from the rest of the world by raising up barriers and closing off markets. They're wrong. If we are to continue growing this economy and creating new jobs, America must remain confident and strong about our ability to trade in the world. Given a level playing field, America will out-perform the competition, and America will continue to be a world leader.

We've got great advantages here in this country. We've got the world's hardest-working people. We've got the most productive work force in the world. We have an attractive climate for our businesses to expand. We have innovative, dynamic companies which are producing world-class products and services. America's best companies are emphasizing quality and service, and developing world-class methods for production. By selling good ideas and good products in markets not only here, but across the world, we're creating jobs -- good, high-paying jobs for the American citizen.

Each recipient of today's award earned it. When I say we need to be confident about our future, I'm confident because I just heard the stories of great success. (Applause.) They got their best ideas from all kinds of places, whether it be from their workers, or their customers. They listened.

In the health care category, we have two winners: Baptist Hospitals in Pensacola, Florida -- (Applause.) I was wondering whether if we called it Pentecostal Hospitals, we'd be -- (Laughter and applause.) Saint Luke's Hospital, in Kansas City, Missouri. These hospitals -- (applause) -- these hospitals have focused on serving patients and their families better. That's what they focused on. They got their employees fully involved in measuring performance. Because of their excellence, both of these winners are saving lives. It must make you feel good to work in an industry in which you save somebody's life. (Applause.)

In manufacturing, we have Medrad Incorporated, of Pittsburgh, Pennsylvania. (Applause.) A maker of medical imaging devices, Medrad's commitment to excellence runs from the top, from the CEO, John Friel, who, by the way, said we -- I put my knee under one of his devices. (Laughter.) I said, "I appreciate the diagnosis. You just hadn't figured out the cure for old age." (Laughter and applause.)

I'll tell you what I like about John's style; he spends a day each month on a front-line job. Here's a fellow who is the CEO who mops the floors, who's taken phone calls, who's heard customer complaints, who works on the assembly line. He's built a culture where everyone at the company has a voice in the way things are done.

Caterpillar Financial Services, of Nashville, Tennessee -- (applause) -- as well as, Boeing Aerospace Support, of St. Louis, provides -- (applause) -- provides maintenance and other services. These are good companies. Both companies have set up teams of employees to focus on quality. And as a result, both have a lot more happy customers.

I love the fact that we're honoring the smallest business ever to win the Baldrige Award, Stoner Incorporated. (Applause.) Today is vacation day. (Laughter.) The whole company is here. (Laughter.) This company, which is in Quarryville, Pennsylvania, makes specialized cleaners, lubricants, and coatings. They have an interesting goal, an easy goal to understand -- I like clear speakers -- (laughter) -- never lose a customer. And that focus has translated to company-wide quality.

And then we've got educational excellence. It's an amazing story you just heard -- the Community Consolidated School District 15 -- (applause) -- Palatine, Illinois -- faces challenges common to many of the school districts across America. But it achieves uncommon results. These people don't make excuses for failure, see? They do what I call "challenging the soft bigotry of low expectations." They expect the best. They believe every child can learn. (Applause.)

It's easy to say, we can't achieve excellence because one-third of our students come from low-income homes. It's easy to say, we can't achieve excellence because English is not the primary language in the homes of another third of our students. Yet, because of rigorous testing and evaluation, and a commitment to high standards, the belief that every child can learn, 84 percent of the second graders read at or above grade level. It's a fantastic accomplishment. The teachers are great in that school. (Applause.) I'm told that from the classroom to the cafeteria, every employee is committed to a single goal: no child should be left behind. (Applause.)

I appreciate the example this school district has set. I appreciate the example all the companies here have set, as well. You're now what we call quality experts, which means you're going to get calls from other companies or organizations to find out how you won, what you did to achieve such good success. And I hope you share your knowledge. The country is better off when you're willing to share how you achieved excellence with those who will want to accomplish the same goals.

Anyone looking for an easy answer, though, is going to be disappointed. It may sound easy in the speeches. It's hard to win this award. (Laughter.) This isn't one of these deals where everybody gets a blue ribbon. (Laughter and applause.) You have to work hard. You have to be totally focused and committed to excellence. It has to be a part of your culture, your very being.

A good product, of course, is essential. It's hard to be successful if you don't make something somebody doesn't want to buy. You've got to have a good business plan. But the most important ingredient is a great work force -- people who live and work by the principles of excellence and fairness and team work and personal responsibility.

That's really what we're honoring today, isn't it? Great work forces, people who are willing to strive for something greater than themselves. The Baldrige Award winners are showing one of the greatest strengths of this nation and our economy. Whether the challenge comes from a competitor across town, or from a competitor across the ocean, American workers are up to the job. (Applause.)