For Immediate Release
Office of the First Lady
March 8, 2004

MRS. BUSH: I want to thank you all for coming out today and covering this, the Red Dress Project. I hope people in New Orleans and in Louisiana will come while the red dresses are here and look at them and become informed about heart disease. 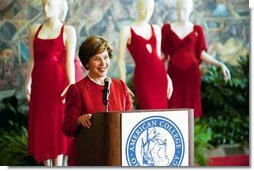 Also, women don't always have exactly the same symptoms that men do. They have what are called silent heart attacks, sometimes atypical symptoms. I met a woman in Kansas City whose symptoms were just sort of a burning in her shoulder blade and tingling in her hand. She felt bad. I mean, she felt terrible. She was extremely fatigued. She had actually even gone to the doctor because she was fatigued. And even he didn't think she could be having a heart problem. So we really need to get the word out, and I want to ask all of you as members of the media to help us spread this word so we can save the lives of American women.

Heart disease is also the number one killer of American men. And the great news is that it can be prevented if we do all those things we all know we're supposed to do, and I know every one of your papers and stations has stories all the time about how we need to exercise, about how we need to eat wisely, watch our weight, and not smoke or use too much alcohol. So I want to encourage you to try to get those words out to your audiences.

Now, do you have any questions?

Q Two questions. How has your knowledge about heart disease in women changed what you have done in your health regimen? And who designed your dress?

I already exercised, I already worked out. And you know, my inspiration for exercise is my husband, who is a really great, very disciplined exercise person. He always works out, and he has for the entire time we've been married. So finally, after we had been married for some number of years, I started working out myself.

I walk for exercise and I lift weights right now -- very light weights, I might add. And then we've also always been interested in healthy foods.

But it's really important for mothers, particularly, to realize that quite often they're the ones who buy the food for their children and cook the food. And they really can have a very beneficial impact on their children if they'll try to eat in a healthy way. And so I want to encourage mothers to do that.

Q Mrs. Bush, I have a question. You talked about feeling well. Right now, if you don't mind just commenting a little bit about how your husband is feeling as we approach the heated political season here?

MRS. BUSH: Well, it's kind of hard to believe we're already back around to the campaign year. It's gone very quickly for us. But I can tell you he's feeling very good today because of the interim constitution that was signed in Iraq today. That's their first step toward building a democracy and having a constitutional government and that is really thrilling news for all of us, for everybody here.

We know from our own experience as Americans but also from watching emerging democracies in the central European countries after the fall of the Soviet Union, that it's not easy to build a democracy. But we also know as Americans that it's right.

So I want to congratulate the Iraqi Governing Council and I know he feels really good about that.

Q -- Presidential primary, how crucial do you think the South and the state of Louisiana is in the race for President, and how involved are you going to be in campaigning down here for your husband?

MRS. BUSH: Well, it's very crucial, of course, as we know from how close the last election was. This one, I suspect will also be close, every state is really important.

Q -- your husband recently has come under fire, for instance, regarding the new ad campaign. Some of the 9/11 victims' families spoke out against it. What are your thoughts on that?

MRS. BUSH: Well, with all due respect to those families who did speak out against it, there were a number of people who spoke out for it. But also I just think it's very important -- I'm struck by the suggestion that we should ignore 9/11 and not mention it. I mean, it was really the defining moment for all of us in our lives. I mean, most people who are our age or younger, it was really the only happening in the United States in our whole history that was like that. And a lot of our foreign policy, what's happening in Afghanistan, what's happening in Iraq, was driven by what happened on that September day when we found out we weren't totally protected by the two oceans and that terrorists would attack our country.

In Afghanistan, we're seeing little girls going to school for the first time in their lives because of the Taliban regime being routed. And I think that's very important, which is why I think September 11th is something we can't forget or that we can't not mention. It's really very, very important for all of us.

MRS. BUSH: Well, I think a number of things. Foreign policy, certainly, as we look at it. And because of September 11th, I think there's a renewed increase in interest on foreign policy. And because of the war on terror, it makes it a particularly strong issue. I also think the economy is always -- every campaign -- the economy is a very important issue. And I'm glad that the economy is getting better. I realize we need to have more jobs. We all need to work to increase our economy. But I think the President's tax cuts helped stimulate our economy. So I think that will be an important issue.

Education is always an important issue. It's a particularly important issue to me, because I'm a teacher and librarian and mother. And I know how important it is. It certainly is also an important part of the economy, and that is to make sure all children are educated, that adults who want to go back to their community colleges, for instance, to get retraining and skills for jobs that actually exist right now, education remains one of the most important issues.

MRS. BUSH: Well, I'm going to go on from here -- I can't leave New Orleans without going to a restaurant. (Laughter.) One of my favorites in the world I'm going on to. But I won't announce it right now. Maybe my press person will tell you. (Laughter.) Anyway, so I'm really glad to be here.

Then after that I'm going back to Washington. We spent the weekend at our ranch hosting President Vicente Fox and Marta Fox from Mexico. We had a really nice time with them. Our ranch has ended up being a really good place to develop a sort of personal and good relationship with foreign leaders. So that was a nice weekend at the ranch.

Thank you all so much, and please cover the Heart Truth and let American women know what their risk factors are.