For Immediate Release
Office of the Press Secretary
February 27, 2004

German-American Alliance for the 21st Century

PRESIDENT BUSH: There will be opening statements. We'll take two questions per side, alternating. 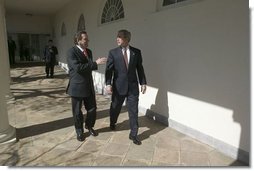 I told the Chancellor I was particularly grateful for German presence in Afghanistan. They're making a very constructive -- playing a constructive role and making sure that country is able to survive in a -- as a free nation. And it's important that Afghanistan succeed, and we really appreciate it.

And so, Mr. Chancellor, welcome back.

CHANCELLOR SCHROEDER: (As translated.) Thank you, Mr. President. Indeed, I'm very pleased to be here once again. And, indeed, we talked about -- not about the past; we very much agreed on that. We have to talk about the present and the future now. We both have a great interest in seeing a stable and democratic Iraq develop.

We also talked about international issues, especially a settlement of the Middle East, the problems and the conflicts there. We very much agreed on that. Whenever one pursues a border outline and a border approach here, one has not to lose sight of the fact that a settlement of the conflict between the Israelis and the Palestinians is necessary if one wants to bring peace to this region.

It was, indeed, a very good meeting, Mr. President, and we very much agreed on that we now have to face up to the challenges of the 21st century.

Q Thank you, sir. I'd like to ask you about gay marriage. What do you believe same-sex weddings -- how do they actually threaten the institution of marriage, in general? And also, are you concerned at all about being considered on the wrong side of the civil rights issue?

PRESIDENT BUSH: This is a -- yes, this is a difficult issue here for a lot of people in America. I believed it was important to act because the institution of marriage was being changed by courts. And it's an issue that's very sensitive. And the voice of the people needs to be heard, and the constitutional process was the best way to do such.

I believe that marriage has served society well, and I believe it is important to affirm that, that marriage between a man and a woman is the ideal. And the job of the President is to drive policy toward the ideal. This is a sensitive debate and it is important that people hold true to their beliefs without condemning anybody else. And so, therefore, I call upon all sides in the debate to conduct themselves with dignity and honor and respect. 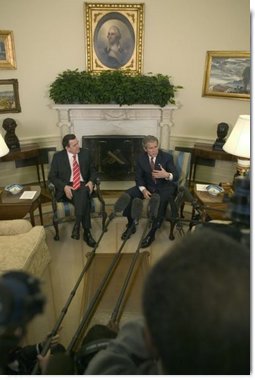 But this is a debate that the nation must have. And the people's voice must be heard in the debate.

Q Mr. President, you're father mentioned Germany as partner in leadership. Is this still the case? And how would you describe the personal relationship between Chancellor Schroeder and yourself?

We have differences in the past. But there's nothing wrong with friends having differences. And we have both committed to put the differences behind us and move forward. Germany is an important nation. And Germany occupies an important place in Europe. And it's essential that America have good relations with Europe. Not only do we share values, we share economic interests. We have the capacity to help keep the peace. And so I would say our relations are good.

There's no question we differed on Iraq. We don't differ on whether Iraq ought to be free and peaceful. And so, no, I look forward to good relations -- continued good relations with Germany and Gerhard Schroeder.

Q Mr. President, would it help settle things in Haiti if President Aristide were to resign?

PRESIDENT BUSH: The Secretary of State has made -- made some comments. Let me follow up on those by saying that we're interested in achieving a political settlement, and we're still working to that effect. We're also, at the same time, planning for a multinational force that would go in and make sure that if aid needed to be delivered, or there needed to be some stability, that it could go in, dependant upon a political settlement.

Q Mr. President, what do you expect Germany's cooperative role to be in the Middle East initiative that you plan to do at the G-8 Summit?

PRESIDENT BUSH: I think it's -- the Chancellor and I were talking about the need to help promote the institutions for free societies to develop. We both understand that the office we hold is always bigger than the occupant. And whether it be in the Palestinian territories or elsewhere in the Middle East, it is essential, first and foremost, to put institutions in place that survive the whims of men and women.

And so we share this common belief that it's important to get the structure right in order for free societies to develop. That's why the Bonn Conference, for example, relating to Afghanistan, was so important, because it began the process of putting the institutions in place for a free Afghanistan to exist. And the Chancellor understands that.

There's a lot of work we can do. There's some skepticism as to whether or not people in the Middle East can self-govern. I strongly reject that skepticism, and I might call it criticism if people hold that attitude, because I believe that freedom is inherently a part of every soul, and that if given the proper structure and proper institutions, people can self-govern. And a self-governing Middle East, one based upon freedom and democracy, will make the world more peaceful. It's a legacy that we need to work on in order to help change the habits of violence and fear and frustration that had spawned terror in the Middle East.