For Immediate Release
Office of the First Lady
February 18, 2004

MRS. BUSH: Thanks for coming out today, I'm really happy to be here at Limerick Elementary. And I want to thank the principal and the teachers and the people who were in the roundtable with me and who I got to watch teach in the reading intervention class, for being there and for helping me and telling me about this school district. 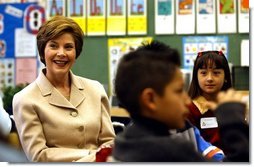 I picked Limerick because of these very programs that you heard about, if you came to the roundtable or if you saw the class. And that is programs that support teachers who are teaching reading and they're using new, proven methods to teach reading. There is a lot of new scientific research about how children learn to read. And so teachers for the first time in a long time can be armed with this research and this training so that they really can teach children to read. We know that if children don't learn to read by the end of the 3rd grade or 4th grade, their chances for learning to read decrease every year, and by the time they get to high school they're often the ones who drop out because of frustration that they -- over not being able to read. Nearly a hundred percent of your high school course load is dependent on your reading ability. But even by the 4th or 5th grade a lot of your course load -- reading history, reading science -- is dependent on how well you can read.

So I want to commend the teachers and the principals here at Limerick for making sure every child here does learn to read.

I'd love to answer your questions.

Q Mrs. Bush, hi. I wanted to ask, Guadalupe, the girl who was so good with verbs back at the classroom talked to you for kind of a long time and seemed to have a lot of questions or something. Can you say what she --

MRS. BUSH: She just whispered to me that she'd written a letter to me and she'd given it to one of my security

people. She just wanted me to know that she'd written me a letter, so I can read her letter when I leave here. I hope one of my security people has it. (Laughter.) We'll find it.

MRS. BUSH: I knew that would happen in a live press conference. (Laughter.)

Q Do you anticipate that Kerry is going to be your husband's opponent? And are you ready to begin this race for November?

MRS. BUSH: I guess it looks like it right now; I assume that he will be. I guess we'll have to see. We have Super Tuesday and a few other primaries coming up, so we'll have to see. But, yes, sure. You know, once they pick a candidate then the race will really start, I guess -- although, it's certainly started on their side. I look forward to it. I look forward to campaigning for my husband, to traveling around the United States with him and for him, when we travel separately. Campaigns, or politics are really all about people, it's a people business, and if you like to be with people it's a great business to be in. 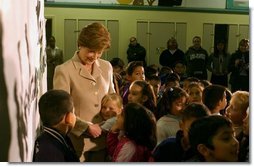 Q What do you anticipate -- would now be the time that -- they've pretty much picked their candidate. What does it take for him to be the presumptive nominee?

MRS. BUSH: Well, we'll have to leave that up to the Democrats. I certainly -- I can't be the one to say it. I guess we'll just see what happens after the next big primary day.

Q Democrats had a good time attacking the administration --

Q And his approval ratings have taken quite a dive. Do you think that those two are tied together, because he hasn't been able to fire back?

MRS. BUSH: Sure, absolutely. I mean, they've had a big primary, they've spent $100 million dollars, all of them

together campaigning around the United States, running ads. In general, I think they've campaigned against my husband, rather than each other, so I think that does make a difference. We'll see when the race really gets started.

MRS. BUSH: Well, I think what happened on September 11th ended up defining his term. And it really defined all of our lives to some extent since then.

So I'm really proud of what's happened in education, as well. We have a long way to go to make sure no child is left behind all over our country. But I know that school districts are really focusing on it. They're focusing on teaching reading, which is the most important skill you learn in school; everything else depends on that skill. So I'm proud about that, too.

That's what I'm talking about this week as I travel in the U.S. Yesterday, I was in Bentonville, Arkansas, to talk about teacher recruitment, because that's part of the No Child Left Behind Act, the goal of having qualified teachers in every classroom. And then tomorrow I'll be in Las Vegas to talk about the money proposed for the 2005 budget, for jobs for the 21st century. And that will be money for intermediate reading programs, to address the problems of 9th graders and 10th graders who are several years behind in their reading level.

So middle schools and high schools can use the monies that will be a part of that to do what we saw today -- be able to take children, students out of their class and put them in a very intensive reading class so they can catch up.

So I am really proud about what's been done about education. But, yes, you know, September 11th defined it.

Thanks everybody. Thank you all for coming out and thank you for covering Limerick School. And I hope you learned something about LA schools and what they're doing about teaching reading today. Thanks a lot.