For Immediate Release
Office of the Press Secretary
February 18, 2004

PRESIDENT BUSH: A couple statements, and I'm going to answer a couple of questions afterwards. Mr. President, welcome. I'm glad you're here in the Oval Office. Thank you for your friendship. I'm looking forward to a good discussion. 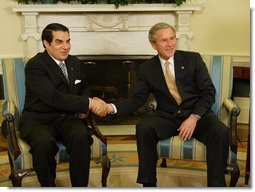 I look forward to talking to you about the need to have a press corps that is vibrant and free, as well as an open political process. There's a lot we can talk about. Tunisia can help lead the greater Middle East to reform and freedom, something that I know is necessary for peace for the long-term.

PRESIDENT BEN ALI: Mr. President, thank you for very much for this opportunity. I am delighted to be here in the United States, and thank you very much for your generous invitation.

We share principles together, Mr. President, and that is the establishment of states on the basis of democracy, human rights and combating terror. We believe that Tunisia is an ally of the United States and the relationships between the two countries has strategic dimension.

And I would like to take this opportunity to thank the friendly American people who stood by us during our liberation and after our independence. Thank you very much.

Q Thanks, Mr. President. More than 3,000 same-sex couples have taken vows since San Francisco started issuing marriage licenses to gays and lesbians. This Massachusetts court ruling could result in the first legally recognized gay marriages in May. Do these developments make you any more inclined to endorse a constitutional amendment banning gay marriage?

PRESIDENT BUSH: I strongly believe that marriage should be defined as between a man and a woman. I am troubled by activist judges who are defining marriage. I have watched carefully what's happened in San Francisco, where licenses were being issued even though the law states otherwise. I have consistently stated that if -- I'll support law to protect marriage between a man and a woman. And obviously these events are influencing my decision.

Q Are you close to a decision?

PRESIDENT BUSH: I'm watching very carefully. But I'm troubled by what I've seen. People need to be involved with this decision. Marriage ought to be defined by the people, not by the courts. And I'm watching it carefully.

Q Mr. President, do you think the economy is strong enough to produce 2.6 million jobs this year, as your economic report projected?

PRESIDENT BUSH: I think the economy is growing. And I think it's going to get stronger. I do think there are some things we need to do. We need to make sure the tax cuts are permanent. I look forward to continuing to talk about this issue. Uncertainty in the tax code could affect small business planning. Uncertainty in the tax code will make it harder for our citizens to make rational decisions about spending money. We need to have an energy policy, open up markets for trade, we need less regulation. We need tort reform. There are things we can do to make sure the economy grows.

I'm pleased by the fact that since August there's been 366,000 new jobs, in one survey. There was another survey called the Household Account that's been more optimistic. But I'm mindful there are still people looking for work, and we've got to continue building on the progress we've made so far.