For Immediate Release
Office of the First Lady
February 18, 2004

MRS. BUSH: Thanks so much everybody for coming out today to the library. I'm here because -- actually, Betty Ford invited me to come to see the new plans at the new Rancho Mirage Library. So I saw the model, which I hope you all have seen as well.

I love to come to libraries. I worked as a librarian, I worked as a librarian in the Houston Public Library, so I have a special fondness for public libraries. And I know that when a community like this invests in a library, then they're showing everyone that ideas and books are important to the community. So I love to come out here and support that. 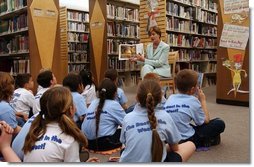 Q I was going to ask you first in english and then in espanol, por favor. (Speaking Spanish) -- what is the President doing so the Hispanic community get -- (speaking Spanish).

MRS. BUSH: Well, he's working very hard in every community, but particularly he's interested in the Hispanic community. We're from a state that shares a very long border with Mexico. We are very aware of all of the issues that have to do with our two countries, our border, with immigration, with the economies and how important it is for both economies -- ours and the economy in Mexico -- to be strong so that people can find work.

Q How about the guest work, the one to implement?

MRS. BUSH: He has proposed, but that is not the law. And I really want you to get the message out to people that that was the President's proposal. Because I hope there won't be scams on illegal immigrants, thinking that that has already become the law. That's his proposal and it's a way to try to deal with the large number of illegal immigrants that are in the United States who, right now, really don't have any rights; they're afraid to go to the police if they suffer a crime because they're illegal, and they think they'll be deported. So it would be a way to try to address that; to also let American companies hire workers when they need workers.

But he'll be working with the Congress to see if something like that can pass. And I do think there is one bill that some Congress people have proposed that has that idea.

Q Do you think this is all a political restitution?

Q Do you think this is a political -- to get the Latino vote?

MRS. BUSH: No, I think it's a human rights issue and a way to address what is a huge inequity in the United States -- and that is illegal workers who are here and don't really have any rights.

Q Your husband is neck-and-neck in the polls with Kerry. What sort of hurdles do you think he's going to face with this election year?

MRS. BUSH: Well, I mean, I think it's going to be a tough election year, there's no doubt about that. I think it's going to be close. But I think my husband is going to win. But so far, the Democrats have been the ones running, of course, with their primaries. They've spent a lot of money on each of their campaigns, when it's combined, running against the President. I think once they pick a candidate, then the real race will start.

Q He's gotten a lot of flack for the economy. What do you say about that?

Q Mrs. Bush, welcome to Palm Springs. As you know, Palm Springs has a very large gay population, some of whom went up to San Francisco to get married this weekend. And you commented on it before, I was wondering if you could share your thoughts about gay marriage in the United States?

MRS. BUSH: Well, the President said today, I think in a press conference, that it's troubling to him that what's happening in San Francisco is actually against the law, because of the Defense of Marriage Act; and that he thinks it's an issue that needs to be debated and discussed, and not really an issue for the Massachusetts supreme court to choose, or for the mayor of San Francisco, for that matter -- that it's an issue for all Americans to debate and come to terms with and discuss.

Q Mrs. Bush, your visit here to Coachella Valley, it's nice to have you here.

Q Is this going to help the Republican vote, do you believe, your visit coming here?

MRS. BUSH: Well, I hope so. (Laughter.) I hope it will turn out the Republican vote.

Q My mother is a Christian school teacher and they pray for you every day before they start class. Another thing, have you contacted Governor Schwarzenegger, and are you guys planning on implementing any new reading programs in California?

MRS. BUSH: Well, I visited a reading program today at Limerick Elementary School in Los Angeles. It's a Title I school, and they are using part of the monies that come out of the No Child Left Behind Act, the Reading First money, to train their teachers in Los Angeles with the new proven research-based methods on how to teach reading.

They also have in -- nearly every LA school they said had this, elementary school -- a reading support teacher who works with all the other teachers in the school. And then they had a really great program, two reading teachers who devoted all their time to teaching reading to the children in the school who needed the most help. The children were referred by their teachers, in consultation with what their test scores were.

And I saw that today. This school happened to be a lot of children who had english as a second language, and that was part of their reading program. It's a really terrific program.

Q Mrs. Bush, you've traveled through so many different schools across the United States, what is the most memorable statement that a child has made to you?

MRS. BUSH: Well, that's interesting. I'll have to say the most -- the school that I remember the most was the school that was in the shadow of the World Trade Center. They had been evacuated, and they had actually run -- the few children that were still left at school, because most of the parents had already come to the school during the day and picked up their children, and so you can imagine the few children that were left who didn't know why their parents hadn't already come to pick them up, were very fearful. And they had run to the next closest school, which was about two miles away.

When I went to visit them first they were still in that school, they were doubling-up in a school while the site of their school was cleaned up. And then the next time I went back, a few months later, they were back in their own school.

But the things that those children said and the fears that they had on those days are what I'll never forget.

Q How is your literacy campaign being met? And how is the success, how are you doing with that?

MRS. BUSH: Well, we're getting the word out, I think, to people that -- number one, to parents, that parents really need to be focused on literacy, themselves, at home; that if they read at home, their children are much more likely to read as well; and if they read to their children, then their children start school with a much bigger vocabulary.

But I think we're also, all over the United States, school districts are really paying attention to reading. Because if you can read, you can do every subject. But if you can't read, then you're really at a huge disadvantage. And tomorrow I'm going on to Las Vegas to talk about intermediate reading programs. This is money that the President has proposed in the 2005 budget, to go to middle schools and high schools for 9th and 10th graders who are several years behind in reading. That's usually when kids drop out of school, and a lot of times it's frustration because they can't read; they can't do their other work, as well, because nearly all of high school work is dependent on being able to read.

And so I'm going to visit a school in Las Vegas that's doing a really good job of interceding, or interventions with children, or students who need extra help in reading so they can catch up; but also in training people, young people for the jobs of the 21st century. And so I look forward to that. Then I'm going to end up in Dallas tomorrow night, and I'll be in Dallas on Friday for -- I'm on the board of my college that's there, to go to the board meeting, then back to Washington.

Q California is typically a democratic state. Do you think having Schwarzenegger in office will change things this year for your husband?

MRS. BUSH: I'm going to continue to campaign like I have been. I've been doing fundraisers around the country, but once the campaign really starts I'll do campaign events separately and then with him. I like to travel with him, especially at the end of the -- you know, that last month after the convention and after Labor Day, when the campaign is really in the final part.

This is our last campaign, no matter what happens, and there's something sort of nostalgic about that, bittersweet.

Q Mrs. Bush, how do you think you have changed in the four years you've been --

MRS. BUSH: I know I've changed because it's been such a huge privilege to travel around our country and to see how great Americans are. Everywhere we go, wherever, in the most unlikely community, you find really terrific things going on because Americans are so, so generous and so great.

And I think since September 11th we've also, all of us, seen how strong the character of the American people is. And I don't know if we really knew that. I think we looked at my parents' generation, the Greatest Generation, the ones who fought in World War II and thought they were strong and they did things we couldn't do. I think we found out we have a lot of strength, too. It's been a hard way to find it out, but we have.

Thanks, you all, so much.

Q Do you want to say something in espanol, for we are the only camera here in espanol?

MRS. BUSH: My espanol -- did you like the way I read about Tomas and I did use a very good accent. (Laughter.) But my Spanish is not very good. So thank you all. Muchas gracias. Thanks a lot.