For Immediate Release
Office of the Press Secretary
February 6, 2004

THE PRESIDENT: Good afternoon. Today, by executive order, I am creating an independent commission, chaired by Governor and former Senator Chuck Robb, Judge Laurence Silberman, to look at American intelligence capabilities, especially our intelligence about weapons of mass destruction.

Last week, our former chief weapons inspector, David Kay, reported that Saddam Hussein's regime had weapons programs and activities in violation of United Nations Security Council resolutions and was a gathering threat to the world. Dr. Kay also stated that some pre-war intelligence assessments by America and other nations about Iraq's weapons stockpiles have not been confirmed. We are determined to figure out why. 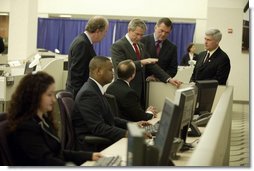 We're also determined to make sure that American intelligence is as accurate as possible for every challenge in the future. The proliferation of weapons of mass destruction poses the most serious of dangers to the peace of the world. Chemical, biological, and nuclear weapons in the hands of terrorist or terror regimes could bring catastrophic harm to America and to our friends.

It is the policy of the United States government to oppose that threat by any means necessary. Our efforts against proliferation begin with and depend upon accurate and thorough intelligence. The men and women of our intelligence community and intelligence officers who work for our friends and allies around the world are dedicated professionals engaged in difficult and complex work.

America's enemies are secretive, they are ruthless, and they are resourceful. And in tracking and disrupting their activities, our nation must bring to bear every tool and advantage at our command. In Iraq, America and our coalition enforce the clearly stated demands of the world -- that a violent regime prove its own disarmament. In the aftermath of September the 11th, 2001, I will not take risks with the lives and security of the American people by assuming the goodwill of dictators.

And now, as we move forward in our efforts to prevent the spread of weapons of mass destruction, we must stay ahead of constantly changing intelligence challenges. The stakes for our country could not be higher, and our standard of intelligence gathering and analysis must be equal to that of the challenge.

The commission I have appointed today will examine intelligence on weapons of mass destruction and related 21st century threats and issue specific recommendations to ensure our capabilities are strong. The commission will compare what the Iraq Survey Group learns with the information we had prior to our Operation Iraqi Freedom. It will review our intelligence on weapons programs in countries such as North Korea and Iran. It will examine our intelligence on the threats posed by Libya and Afghanistan before recent changes in those countries. Members of the commission will issue their report by March 31, 2005. 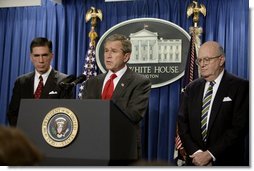 I've ordered all departments and agencies, including our intelligence agencies, to assist the commission's work. The commission will have full access to the findings of the Iraq Survey Group. In naming this commission, these men as co-chairmen of the commission, I'm also naming, today, Senator John McCain; Lloyd Cutler, former White House Counsel to Presidents Carter and Clinton; Rick Levin, the President of Yale University; Admiral Bill Studeman, the former Deputy Director of the Central Intelligence Agency; Judge Pat Wald, a former judge on the D.C. Court of Appeals. Those are seven members named. The commission calls for up to nine members. As we vet and find additional members to fill out the nine, we will let you know.

Thank you for your attention.