For Immediate Release
Office of the First Lady
February 4, 2004

MRS. BUSH: Thank you all for coming out today to cover The Heart Truth. I hope all of you and your newspapers and your television stations will go back and cover this and really let women and men know what their risk factors are for heart disease. But especially get the word out to women, because women -- one of the reasons there is the higher death rate of women than men with heart disease is because women don't seek help fast enough, because they just think of heart disease as a man's disease. 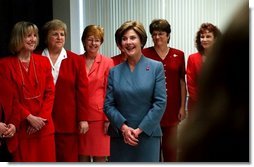 So that's really the point of The Heart Truth campaign and the Red Dress Project, the red dress pin that we're all wearing, and the red dresses designed by American designers that will be introduced next week during fashion week in New York. And then we'll travel around the United States to remind people in cities around the United States to get their risk factors checked, go to the doctor to make sure they don't have high blood pressure or any of the other factors, besides making those lifestyle changes that we all know and that I know every one of your stations and your newspapers in your health reports tell Americans all the time. But maybe we can encourage more women to make those lifestyle changes.

I also want to say especially to the Georgia press, thank you for your hospitality. We're really looking forward to hosting the G-8 here in June and I know that Mayor Johnson from Savannah has been working very closely with all the group who is putting together the G-8. And we're really looking forward to showing our foreign leaders that we've invited to the G-8 our beautiful country and especially this really lovely state. We know it will be a really terrific visit.

MRS. BUSH: Well, I think that because I have this forum, because I -- people will come listen to me, I think I have the opportunity to get the word out, and that's what happened in the story that I told during the speech about the woman in Kansas City, who heard on the news that women didn't often have exactly the same symptoms as men. And she had actually -- her main symptom had been fatigue, extreme fatigue, and she had gone to the doctor, and he had said her vital signs were fine.

But when she couldn't sleep that night and her symptom was she had tingling in one finger in her hand and then sort of a burning situation in her shoulder blade. And because she had heard on the news that women didn't all have the same symptoms that men do, she went ahead to the hospital.

Q Not to be indelicate, have you ever had to struggle with weight or a habit like smoking?

MRS. BUSH: Sure, absolutely. That's why I say to people, don't start. That's what Christina Beato was talking about smoking. You know, I hope especially that young women and men don't smoke, don't ever start smoking because it's difficult to quit. And it's also very difficult to lose weight.

In fact, I think that's even more difficult. And I know that women and men all over the country -- and now we know children as well, American children are struggling with the facts of obesity. We know that children do not want to be fat; they don't feel good in school about themselves. And it's really up to parents and adults who choose the food for their children, who buy the food for their children to promote a healthy lifestyle and to feed their children foods that are healthy and heart healthy and that lead to maintaining a good weight.

Q I'm sorry, has this touched you personally in your family?

MRS. BUSH: It hasn't. My mother is living and doing very well, and my father died of Alzheimer's in 1995.

Q Well, what really prompted you to --

MRS. BUSH: Well, when I heard the statistics. I had no idea. I, like I'm sure most women, thought that cancer was the number one killer of women, and I was really surprised when I heard that more women die of heart disease than all cancers combined. And then the really good news about this is that it is preventable and there are lifestyle changes we can take. And just if we even get the message out so that if women are suffering a heart attack, that they go to the doctor, go to the hospital and rush them -- they would rush their spouses to the hospital, and we want them to do the same thing if they have any symptoms of heart disease.

Q Mrs. Bush, in talking about health issues, do you know if the President is working on a plan, a health plan that would include all Americans?

MRS. BUSH: Well, he -- actually, the Medicare plan that was signed last year by the whole Congress is one of the first times, really, after both parties had talked for a long time about passing Medicare, new Medicare reform, and that has passed. And I know that all the members of the Congress and the President are working to make sure all Americans have the opportunity to get health coverage.

But I do want to say to people, if you don't have health coverage, don't stay home if you're having the symptoms of a heart attack, that hospitals will treat you and you need to go. Don't wait until it's too late.

Q Mrs. Bush, you have daughters who are about my age. How do you hope to reach the 20-year-old group and change their lifestyle? Don't eat fast food, don't -- you know --

MRS. BUSH: Well, the fast food part is a really hard part for 20-year-olds to stop. I know that. But I also know that my girls, and I think a lot more younger women and men do work out. They do exercise and exercise is a big part of their lives. Women's sports are a big part of our girls' lives. They're new to a lot of schools since I was in school. I think we had tennis only, that many years ago.

But I do think that young people are very aware of their health. That isn't to say they don't think they can quit some bad habits that they have later when they're older. But I do know young people know they want to exercise. They're very aware what foods are healthy. So what we want them to do is make the right choices for themselves. And that's a message we try to get out to all Americans. And that is to really make wise choices. And, of course, the main thing for mothers, if mothers make wise choices for themselves, their children are more likely to make those wise choices.

Q Are your daughters in any way involved in The Heart Truth campaign?

MRS. BUSH: No, they're not. But they do work out and they're in good shape. And they know a lot about food. (Laughter.) That doesn't keep them from eating fast food though.

Q Mrs. Bush, you mentioned a reception later. How involved do you plan to be in the reelection campaign?

Politics is really a people business. It's all about people. And if you like people like I do and like he does, it's fun to be able to go around, see old friends around the country and meet new friends, and plus just to see our really beautiful country. It's a huge privilege to be able to travel with my husband around our country.

Q Have you developed skin like an armadillo yet?

Q A lot of people are so excited that you have chosen our area for the G-8. And if you could just, you know, tell us again why you think that Savannah and Sea Island are --

MRS. BUSH: Well, we picked the Sea Island area because it is so absolutely beautiful. And we were excited to be able to show all these leaders who are coming in from around the world how beautiful this part of our country is.

Thank you all. Thanks so much. And I really want to encourage you to cover heart disease and really get the word out to women especially around all of this state and around our country. Thank you all.