For Immediate Release
Office of the Press Secretary
February 3, 2004

THE PRESIDENT: It's my honor to welcome the Secretary General here to the Oval Office. We've just had a really constructive dialogue about a lot of issues. And the world is changing for the better and the United Nations is playing a vital role in that change. And we talked about Iraq and Afghanistan, Pakistan, India, the Middle East, the continent of Africa. And I'll let the Secretary General speak for himself, but I'm upbeat and optimistic about the future of the world. 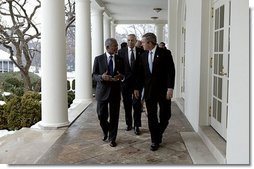 We've got a lot of work to do in certain areas and, obviously, a lot of focus right now on Iraq. And I have always said that the United Nations needs to play a vital role and it's an important role. And we have discussed ways to make sure that by working together the Iraqi people can be free, and their country stable and prosperous, and an example of democracy in the Middle East. And the United Nations does have a vital role there, and I look forward to working with the Secretary General to achieve that.

THE SECRETARY GENERAL: Thank you very much, Mr. President. As you heard the President, we've had a very good and lengthy meeting on a whole host of issues. We realize that last year we were all taken up with war, the question of war and peace in Iraq. But we have many other issues to work on together, the President and I have agreed, other areas which are important that we will be working on.

On Iraq, I believe that the stability of Iraq is in everyone's interest. The U.N. does have a role to play, and that's why following the meeting of 19 January, I have decided to send in a team, a team that will go in to try and work with the Iraqis in finding the way forward. Everyone agrees that sovereignty should be handed over to Iraq as soon as possible. The date of 30 June has been suggested, but there is some disagreement as to the mechanism for establishing the provisional government. And I hope this team I'm sending in will be able to play a role getting the Iraqis to understand that if they could come to some consensus and some agreement on how to establish that government, they're halfway there.

We are going to go there to help the Iraqis, to help them establish a government that is Iraqi, a government that will work with them to assure their future, in terms of political and economic destiny. And the team will talk to as many Iraqis as possible and help them steer things in the right direction. The CPA -- that is the Coalition led by Mr. Bremer, and the Iraqi Governing Council, when they met me in New York, indicated that they would accept the conclusions of the U.N. team. So we do have a chance to help break the impasse which exists at the moment and move forward. 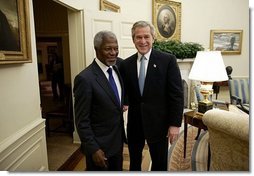 On other issues, as the President indicated, we are going to work very closely together. We've had some successes and there are very positive developments around the world, which we are also going to try and build on and consolidate.

So thank you very much, Mr. President.