For Immediate Release
Office of the Press Secretary
February 2, 2004

Heart disease is the leading cause of death in the United States. It affects men and women of every age and race. During American Heart Month, we encourage all Americans to join the fight against heart disease and to learn more about how to prevent it. 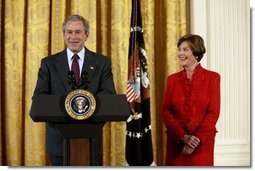 More than 64 million Americans suffer from one or more forms of cardiovascular disease, including high blood pressure, coronary heart disease, congestive heart failure, stroke, and congenital heart defects. Many of the risk factors that can lead to heart disease, such as high blood pressure, high blood cholesterol, and diabetes, can be prevented or controlled. Research has shown that men and women who lead healthy lifestyles, including making healthy food choices, getting regular exercise, main-taining a healthy weight, and choosing not to smoke or drink excessively, can significantly decrease their risk of heart disease.

Heart disease is responsible for the deaths of one in three women in the United States. To make women more aware of the danger of heart disease, the National Heart, Lung, and Blood Institute of the National Institutes of Health has joined with the Department of Health and Human Services and other national organizations to launch a nationwide campaign called "The Heart Truth." This important campaign encourages women to learn more about heart health, to lead healthier lives, and to talk with their doctors about their risk for developing heart disease.

During American Heart Month, I urge all Americans to learn more about heart health and to reduce their risk factors for serious heart conditions. By making healthy choices, we can live longer and better lives.

In recognition of the important ongoing fight against heart disease, the Congress, by Joint Resolution approved December 30, 1963, as amended (77 Stat. 843; 36 U.S.C. 101), has requested that the President issue an annual proclamation designating February as "American Heart Month."

NOW, THEREFORE, I, GEORGE W. BUSH, President of the United States of America, do hereby proclaim February 2004 as American Heart Month. I invite the Governors of the States, the Commonwealth of Puerto Rico, officials of other areas subject to the jurisdiction of the United States, and the American people to join me in reaffirming our commitment to combating heart disease.

IN WITNESS WHEREOF, I have hereunto set my hand this second day of February, in the year of our Lord two thousand four, and of the Independence of the United States of America the two hundred and twenty-eighth.