For Immediate Release
Office of the Press Secretary
February 2, 2004

In Focus: The Budget

THE PRESIDENT: I want to thank the members of my Cabinet for their service to our country. I'm proud of the team I've put together to serve our citizens. These are good, honorable people who have come to Washington, D.C. to put the nation's interests above their self-interest. 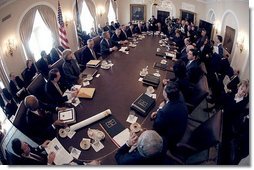 We had a good discussion today about our nation's priorities. Secretary Powell briefed us on the alliances, the strong alliances we have around the world, a deep desire to continue to work with nations to bring freedom and peace around the world. The Secretary of Defense briefed us on the progress we're making in Afghanistan and in Iraq. Appreciate the briefing I got from Tom Ridge about homeland security efforts. And we've got a lot of really fine people in the country who are working overtime, long hours, to protect the American people and they're doing a really fine job.

And, finally, Josh Bolten gave us a briefing on our budget. This administration is putting together -- has put together a budget and will be submitting it to Congress, which sets clear priorities: winning the war on terror, protecting our homeland, making sure our children get educated, making sure the seniors get a modern Medicare system. And at the same time we're calling upon Congress to be wise with the taxpayer's money. We look forward to working with them to bring fiscal discipline to the appropriations process so we can cut the deficit in half over a five year period of time.

Again, I'm proud of the Cabinet, appreciate your work.

I'll be glad to take a couple of questions. Terry, you might have a question.

Q Yes, Mr. President. I'd like to ask you about this intelligence investigation that you're going to order. Do you think that the country is owed an explanation about the Iraq intelligence failures before the election, so that voters have this information when they elect a new President?

THE PRESIDENT: Well, the -- first of all, I want to know all the facts. We do know that Saddam Hussein had the intent and the capabilities to cause great harm, we know he was a danger. And he was not only a danger to people in the free world, he was a danger to his own people; he slaughtered thousands of people, imprisoned people.

What we don't know yet is what we thought and what the Iraqi Survey Group has found, and we want to look at that. But we also want to look at our war against proliferation and weapons of mass destruction, kind of in a broader context. And so I'm putting together an independent, bipartisan commission to analyze where we stand, what we can do better as we fight this war against terror.

Before I move forward with the commission, I want to sit down with Mr. Kay. I appreciate his service. I've invited him to come down to the White House. I'll be doing so soon. I do want to get a briefing from him.

Q Sir, do you worry that your budget passes along problems to future generations? You often say you don't want to do that.

THE PRESIDENT: No, I'm confident our budget addresses a very serious situation, and that is, we are at war, and we are -- had dealt with a recession. And our budget is able to address those significant factors in a way that reduces the deficit in half. We propose, the Congress disposes. And so we look forward to working with the appropriators to meet our priorities and to reduce the deficit in half. We're confident we can do so.

The reason we are where we are, in terms of the deficit, is because we went through a recession, we were attacked, and we're fighting a war. And these are high hurdles for a budget and for a country to overcome, and yet we've overcome them, because we've got a great country, full of decent people. And the economy is getting better. And as the economy gets better, it enables us to send up a budget to the Congress that does cut the deficit in half.

Q What part of the Super Bowl did you like the best? The half time or the ending? (Laughter.)

THE PRESIDENT: I don't want to admit it, but because this White House starts early, I missed it -- again. Saw the first half, did not see the half time -- I was preparing for the day and fell asleep. But you all can tell me about it. (Laughter.)