For Immediate Release
Office of the Press Secretary
January 14, 2004 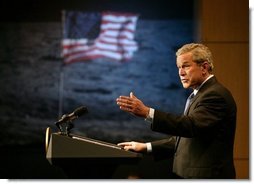 THE PRESIDENT: Thanks for the warm welcome. I'm honored to be with the men and women of NASA. I thank those of you who have come in person. I welcome those who are listening by video. This agency, and the dedicated professionals who serve it, have always reflected the finest values of our country -- daring, discipline, ingenuity, and unity in the pursuit of great goals.

America is proud of our space program. The risk takers and visionaries of this agency have expanded human knowledge, have revolutionized our understanding of the universe, and produced technological advances that have benefited all of humanity.

Inspired by all that has come before, and guided by clear objectives, today we set a new course for America's space program. We will give NASA a new focus and vision for future exploration. We will build new ships to carry man forward into the universe, to gain a new foothold on the moon, and to prepare for new journeys to worlds beyond our own.

I am comfortable in delegating these new goals to NASA, under the leadership of Sean O'Keefe. He's doing an excellent job. (Applause.) I appreciate Commander Mike Foale's introduction -- I'm sorry I couldn't shake his hand. (Laughter.) Perhaps, Commissioner, you'll bring him by -- Administrator, you'll bring him by the Oval Office when he returns, so I can thank him in person.

I also know he is in space with his colleague, Alexander Kaleri, who happens to be a Russian cosmonaut. I appreciate the joint efforts of the Russians with our country to explore. I want to thank the astronauts who are with us, the courageous spacial entrepreneurs who set such a wonderful example for the young of our country. (Applause.)

And we've got some veterans with us today. I appreciate the astronauts of yesterday who are with us, as well, who inspired the astronauts of today to serve our country. I appreciate so very much the members of Congress being here. Tom DeLay is here, leading a House delegation. Senator Nelson is here from the Senate. I am honored that you all have come. I appreciate you're interested in the subject -- (laughter) -- it is a subject that's important to this administration, it's a subject that's mighty important to the country and to the world.

Two centuries ago, Meriwether Lewis and William Clark left St. Louis to explore the new lands acquired in the Louisiana Purchase. They made that journey in the spirit of discovery, to learn the potential of vast new territory, and to chart a way for others to follow. 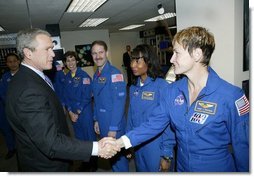 America has ventured forth into space for the same reasons. We have undertaken space travel because the desire to explore and understand is part of our character. And that quest has brought tangible benefits that improve our lives in countless ways. The exploration of space has led to advances in weather forecasting, in communications, in computing, search and rescue technology, robotics, and electronics. Our investment in space exploration helped to create our satellite telecommunications network and the Global Positioning System. Medical technologies that help prolong life -- such as the imaging processing used in CAT scanners and MRI machines -- trace their origins to technology engineered for the use in space.

Our current programs and vehicles for exploring space have brought us far and they have served us well. The Space Shuttle has flown more than a hundred missions. It has been used to conduct important research and to increase the sum of human knowledge. Shuttle crews, and the scientists and engineers who support them, have helped to build the International Space Station.

Telescopes -- including those in space -- have revealed more than 100 planets in the last decade alone. Probes have shown us stunning images of the rings of Saturn and the outer planets of our solar system. Robotic explorers have found evidence of water -- a key ingredient for life -- on Mars and on the moons of Jupiter. At this very hour, the Mars Exploration Rover Spirit is searching for evidence of life beyond the Earth.

Yet for all these successes, much remains for us to explore and to learn. In the past 30 years, no human being has set foot on another world, or ventured farther upward into space than 386 miles -- roughly the distance from Washington, D.C. to Boston, Massachusetts. America has not developed a new vehicle to advance human exploration in space in nearly a quarter century. It is time for America to take the next steps.

Today I announce a new plan to explore space and extend a human presence across our solar system. We will begin the effort quickly, using existing programs and personnel. We'll make steady progress -- one mission, one voyage, one landing at a time. 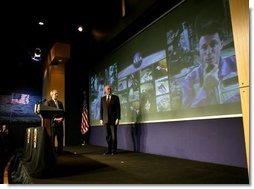 Our first goal is to complete the International Space Station by 2010. We will finish what we have started, we will meet our obligations to our 15 international partners on this project. We will focus our future research aboard the station on the long-term effects of space travel on human biology. The environment of space is hostile to human beings. Radiation and weightlessness pose dangers to human health, and we have much to learn about their long-term effects before human crews can venture through the vast voids of space for months at a time. Research on board the station and here on Earth will help us better understand and overcome the obstacles that limit exploration. Through these efforts we will develop the skills and techniques necessary to sustain further space exploration.

To meet this goal, we will return the Space Shuttle to flight as soon as possible, consistent with safety concerns and the recommendations of the Columbia Accident Investigation Board. The Shuttle's chief purpose over the next several years will be to help finish assembly of the International Space Station. In 2010, the Space Shuttle -- after nearly 30 years of duty -- will be retired from service.

Our second goal is to develop and test a new spacecraft, the Crew Exploration Vehicle, by 2008, and to conduct the first manned mission no later than 2014. The Crew Exploration Vehicle will be capable of ferrying astronauts and scientists to the Space Station after the shuttle is retired. But the main purpose of this spacecraft will be to carry astronauts beyond our orbit to other worlds. This will be the first spacecraft of its kind since the Apollo Command Module.

Our third goal is to return to the moon by 2020, as the launching point for missions beyond. Beginning no later than 2008, we will send a series of robotic missions to the lunar surface to research and prepare for future human exploration. Using the Crew Exploration Vehicle, we will undertake extended human missions to the moon as early as 2015, with the goal of living and working there for increasingly extended periods. Eugene Cernan, who is with us today -- the last man to set foot on the lunar surface -- said this as he left: "We leave as we came, and God willing as we shall return, with peace and hope for all mankind." America will make those words come true. (Applause.)

Returning to the moon is an important step for our space program. Establishing an extended human presence on the moon could vastly reduce the costs of further space exploration, making possible ever more ambitious missions. Lifting heavy spacecraft and fuel out of the Earth's gravity is expensive. Spacecraft assembled and provisioned on the moon could escape its far lower gravity using far less energy, and thus, far less cost. Also, the moon is home to abundant resources. Its soil contains raw materials that might be harvested and processed into rocket fuel or breathable air. We can use our time on the moon to develop and test new approaches and technologies and systems that will allow us to function in other, more challenging environments. The moon is a logical step toward further progress and achievement.

With the experience and knowledge gained on the moon, we will then be ready to take the next steps of space exploration: human missions to Mars and to worlds beyond. (Applause.) Robotic missions will serve as trailblazers -- the advanced guard to the unknown. Probes, landers and other vehicles of this kind continue to prove their worth, sending spectacular images and vast amounts of data back to Earth. Yet the human thirst for knowledge ultimately cannot be satisfied by even the most vivid pictures, or the most detailed measurements. We need to see and examine and touch for ourselves. And only human beings are capable of adapting to the inevitable uncertainties posed by space travel.

As our knowledge improves, we'll develop new power generation propulsion, life support, and other systems that can support more distant travels. We do not know where this journey will end, yet we know this: human beings are headed into the cosmos. (Applause.)

And along this journey we'll make many technological breakthroughs. We don't know yet what those breakthroughs will be, but we can be certain they'll come, and that our efforts will be repaid many times over. We may discover resources on the moon or Mars that will boggle the imagination, that will test our limits to dream. And the fascination generated by further exploration will inspire our young people to study math, and science, and engineering and create a new generation of innovators and pioneers.

This will be a great and unifying mission for NASA, and we know that you'll achieve it. I have directed Administrator O'Keefe to review all of NASA's current space flight and exploration activities and direct them toward the goals I have outlined. I will also form a commission of private and public sector experts to advise on implementing the vision that I've outlined today. This commission will report to me within four months of its first meeting. I'm today naming former Secretary of the Air Force, Pete Aldridge, to be the Chair of the Commission. (Applause.) Thank you for being here today, Pete. He has tremendous experience in the Department of Defense and the aerospace industry. He is going to begin this important work right away.

We'll invite other nations to share the challenges and opportunities of this new era of discovery. The vision I outline today is a journey, not a race, and I call on other nations to join us on this journey, in a spirit of cooperation and friendship.

Achieving these goals requires a long-term commitment. NASA's current five-year budget is $86 billion. Most of the funding we need for the new endeavors will come from reallocating $11 billion within that budget. We need some new resources, however. I will call upon Congress to increase NASA's budget by roughly a billion dollars, spread out over the next five years. This increase, along with refocusing of our space agency, is a solid beginning to meet the challenges and the goals we set today. It's only a beginning. Future funding decisions will be guided by the progress we make in achieving our goals.

We begin this venture knowing that space travel brings great risks. The loss of the Space Shuttle Columbia was less than one year ago. Since the beginning of our space program, America has lost 23 astronauts, and one astronaut from an allied nation -- men and women who believed in their mission and accepted the dangers. As one family member said, "The legacy of Columbia must carry on -- for the benefit of our children and yours." The Columbia's crew did not turn away from the challenge, and neither will we. (Applause.)

Mankind is drawn to the heavens for the same reason we were once drawn into unknown lands and across the open sea. We choose to explore space because doing so improves our lives, and lifts our national spirit. So let us continue the journey.