For Immediate Release
Office of the Press Secretary
December 19, 2003

THE PRESIDENT: Good evening. I have called you here today to announce a development of great importance in our continuing effort to prevent the spread of weapons of mass destruction. Today in Tripoli, the leader of Libya, Colonel Moammar al-Ghadafi, publicly confirmed his commitment to disclose and dismantle all weapons of mass destruction programs in his country. He has agreed immediately and unconditionally to allow inspectors from international organizations to enter Libya. These inspectors will render an accounting of all nuclear, chemical and biological weapons programs and will help oversee their elimination. Colonel Ghadafi's commitment, once it is fulfilled, will make our country more safe and the world more peaceful. 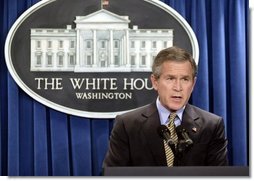 Talks leading to this announcement began about nine months, ago when Prime Minister Tony Blair and I were contacted through personal envoys by Colonel Ghadafi. He communicated to us his willingness to make a decisive change in the policy of his government. At the direction of Colonel Ghadafi, himself, Libyan officials have provided American and British officers with documentation on that country's chemical, biological, nuclear and ballistic missile programs and activities. Our experts in these fields have met directly with Libyan officials to learn additional details.

Opposing proliferation is one of the highest priorities of the war against terror. The attacks of September the 11th, 2001 brought tragedy to the United States and revealed a future threat of even greater magnitude. Terrorists who killed thousands of innocent people would, if they ever gained weapons of mass destruction, kill hundreds of thousands -- without hesitation and without mercy. And this danger is dramatically increased when regimes build or acquire weapons of mass destruction and maintain ties to terrorist groups.

The United States and our allies are applying a broad and active strategy to address the challenges of proliferation, through diplomacy and through the decisive actions that are sometimes needed. We've enhance our intelligence capabilities in order to trace dangerous weapons activities. We've organized a proliferation security initiative to interdict dangerous materials and technologies in transit. We've insisted on multilateral approaches like that in North Korea to confront threats. We are supporting the work of the International Atomic Energy Agency to hold the Iranian regime to its treaty obligations.

We obtained an additional United Nations Security Council Resolution requiring Saddam Hussein to prove that he had disarmed, and when that resolution was defied, we led a coalition to enforce it. All of these actions by the United States and our allies have sent an unmistakable message to regimes that seek or possess weapons of mass destruction. Those weapons do not bring influence or prestige. They bring isolation and otherwise unwelcome consequences.

And another message should be equally clear: leaders who abandon the pursuit of chemical, biological and nuclear weapons, and the means to deliver them, will find an open path to better relations with the United States and other free nations. With today's announcement by its leader, Libya has begun the process of rejoining the community of nations. And Colonel Ghadafi knows the way forward. Libya should carry out the commitments announced today. Libya should also fully engage in the war against terror. Its government, in response to the United Nations Security Council Lockerbie demands, has already renounced all acts of terrorism and pledged cooperation in the international fight against terrorism. We expect Libya to meet these commitments, as well.

As the Libyan government takes these essential steps and demonstrates its seriousness, its good faith will be returned. Libya can regain a secure and respected place among the nations, and over time, achieve far better relations with the United States. The Libyan people are heirs to an ancient and respected culture, and their country lies at the center of a vital region. As Libya becomes a more peaceful nation, it can be a source of stability in Africa and the Middle East.

Should Libya pursue internal reform, America will be ready to help its people to build a more free and prosperous country. Great Britain shares this commitment, and Prime Minister Blair and I welcome today's declaration by Colonel Ghadafi. Because Libya has a troubled history with America and Britain, we will be vigilant in ensuring its government lives up to all its responsibilities. Yet, as we have found with other nations, old hostilities do not need to go on forever. And I hope that other leaders will find an example in Libya's announcement today.

Our understanding with Libya came about through quiet diplomacy. It is a result, however, of policies and principles declared to all. Over the last two years, a great coalition of nations has come together to oppose terror and to oppose the spread of weapons of mass destruction. We've been clear in our purposes. We have shown resolve. In word and in action, we have clarified the choices left to potential adversaries. And when leaders make the wise and responsible choice, when they renounce terror and weapons of mass destruction, as Colonel Ghadafi has now done, they serve the interest of their own people and they add to the security of all nations.