For Immediate Release
Office of the Press Secretary
December 15, 2003


Dr. Khudair Abbas, the Iraqi Interim Minister of Health, and six other physicians from Iraq, met with President Bush today to discuss recent improvements in the Iraqi healthcare system. The doctors described to the President the dedicated efforts of Iraqi healthcare professionals, and the invaluable support the Iraqi medical system is receiving from the international community. Improvements in Iraq's health services include: 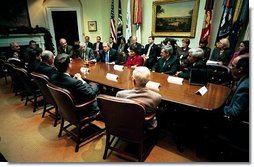