For Immediate Release
Office of the Press Secretary
December 11, 2003

THE PRESIDENT: I want to thank the members of my Cabinet for coming for what will be the last Cabinet meeting of the year 2003. I've just heard from each Cabinet member about the accomplishments in the year 2003. This has been an historic year. America is safer, America is more prosperous, America is a better place because of the actions this administration has taken. 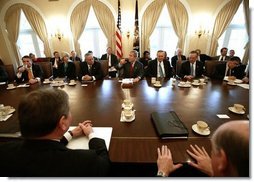 In order to secure America, we liberated the people of Iraq from a brutal tyrant, and now we're in the process of rebuilding that country, along with others, and we're making good progress.

In order to make sure people could find work in America, we proposed, and Congress passed, an economic stimulus package, and that package is making a significant difference on our economy. Our economy is strong, it is vibrant, people are finding work. But we won't rest until everybody who wants to find a job can find one.

The country is better off for a lot of reasons. A significant piece of legislation was passed by the Congress, which I recently signed, and that is the Medicare reform bill. We took on a tough issue, we worked with Congress to make sure that we fulfilled a promise to America's seniors by modernizing and strengthening Medicare.

This has been a year of accomplishment. We also recognize we've got a job to do, to continue to do for the American people, to keep this country safe and prosperous and strong and a better place for all our citizens. And we look forward to working with the Congress in the year '04 to accomplish those objectives.

Today is Mel Martinez's, the fine Secretary of HUD, last meeting. Mel has served our country with class and distinction, I'm proud, Mel, to have had you on this team. Good job.

THE PRESIDENT: I'll answer a couple of questions -- that would be two questions. Terry.

Q Mr. President, what did the leaders of France, Russia and Germany say to you yesterday about being excluded from contracts, reconstruction contracts in Iraq? And can those countries be considered for the contract if they forgive debt that's owed by Iraq? 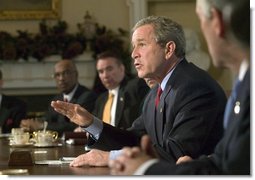 Q Sir, Chancellor Schroeder says international law must apply in this case. What's you're understanding of the law?

THE PRESIDENT: International law? I better call my lawyer; he didn't bring that up to me. I asked President Chirac and Chancellor Schroeder and President Putin to see Jim Baker, to talk about debt restructuring. If these countries want to participate in helping the world become more secure by enabling Iraq to emerge as a free and peaceful country, one way to contribute is through debt restructuring. And so Jim Baker, with the consent of the Secretary of State, is going to go over and talk to these leaders about that. But I don't know what you're talking about, about international law. I've got to consult my lawyer.

Q Can I clarify one thing?

THE PRESIDENT: Yes, you may clarify something.

Q Thank you very much.

THE PRESIDENT: Depends on what it is, though. (Laughter.)

Q You seem to be saying that the boots on the ground are the only qualifications for -- but what about the forgiveness of debt? Isn't that a fairly substantial --

THE PRESIDENT: It is, it would be a significant contribution, for which we would be very grateful. What I'm saying is, in the expenditure of taxpayer's money -- and that's what we're talking about now -- the U.S. people, the taxpayers understand why it makes sense for countries that risk lives to participate in the contracts in Iraq. It's very simple. Our people risk their lives. Coalition -- friendly coalition folks risk their lives, and, therefore, the contracting is going to reflect that. And that's what the U.S. taxpayers expect.