For Immediate Release
Office of the Press Secretary
December 4, 2003

THE PRESIDENT: Thank you all for coming. Please be seated. Thanks. Good morning, everybody. Thanks for coming to the Roosevelt Room. Today we're taking important steps to ensure that all Americans of every income and background have fair access to credit.

For our economy, reliable access to credit and capital is essential to growth and prosperity. For individuals, a chance to get ahead and to make a better life often depends on building credit. So many decisions like buying a home or financing a car, or owning a small business are made easier by good credit. The bill I'm about to sign will help make sure that hardworking, law-abiding citizens are treated fairly when they apply for credit. 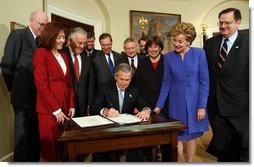 This bill also confronts the problem of identity theft. A growing number of Americans are victimized by criminals who assume their identities and cause havoc in their financial affairs. With this legislation, the federal government is protecting our citizens by taking the offensive against identity theft.

I appreciate the fact that I'm joined up here by the Secretary of the Treasury, John Snow; and Tim Muris, who is the Chairman of the Federal Trade Commission. Muris is responsible for writing the regulations to make sure that the intention of the Congress is met.

And speaking about the Congress, I want to thank the members of the Congress, both Republicans and Democrats, who are here to join in the bill signing. Good, honorable members who have worked hard to protect our citizens. I appreciate Senator Paul Sarbanes for joining us today. I'm honored that Senator Bob Bennett has joined us, as well; as well as Maria Cantwell and Elizabeth Dole. Thank you, Senators, for coming. Thanks for your good work on this.

I also want to thank Richard Shelby for his good work. He's not with us today, but Shelby gets some credit. (Laughter.) From the House. (Laughter.) Congressman Oxley, I appreciate you, Mr. Chairman. And Paul Gillmor. Spencer Bachus -- thanks for coming, Spence. I appreciate you sponsoring this piece of legislation. Steve LaTourette and Darlene Hooley are here. Thank you all for coming.

Again, I want to again congratulate the Congress for working on this important piece of legislation, and exceeding expectations, I might add. At least you've exceeded the expectations of the administration on this bill. (Laughter.)

The legislation, the Fair and Accurate Credit Transactions Act of 2003, carries forward the progress this nation has made in recent years to help qualified Americans get fair access to credit. Before 1996, there were no uniform rules on borrower information and credit reports. Lenders did not always have consistent and full information about potential borrowers. Lenders too often made broad assumptions and decisions about categories of people, rather than looking at individuals and their personal credit histories.

Too often, lenders assumed the worst. And therefore, people with lower incomes, and immigrants with little or no credit history, people who lived in certain neighborhoods had a more difficult time getting affordable loans. And that's not fair, and it's not right, and it does not reflect the spirit of this country. (Applause.)

And so the Congress wisely acted. In 1996, the Congress set uniform national standards on credit reporting. Credit histories are now more complete and thorough, and the lending process is fairer. Many Americans have been able to obtain loans that they would not have had otherwise, and that's important. According to estimates, over the last seven years, more than 1 million men and women have obtained new or refinanced mortgages that would have been denied if there had not been a fair national standard.

One of them is here today. I appreciate Shonelle Blake coming. She's got the toughest job in America -- she's a single mom. She has two four-year-olds, mom of twins. I know something about twins. (Laughter.) In the early 1990s, Shonelle set herself two goals -- she set high goals. One was to buy a house, and the other was to start a business. She made sure her credit was in order. She went to the HOPE Center in Los Angeles -- I know something about there since I've been there myself -- to help get a down payment on a home. One year later, she got another loan to start her own insurance business.

Shonelle is building a life of independence and success, in part because a loan was given to her based on her own merit. Because we had a national standard she was able to get a loan. Because Congress did the right thing in 1996, this entrepreneur and mother was able to realize a dream. The national credit standards that help ensure that the lenders considered each applicant on her merits are what made the loan possible.

John Bryant, who's with us -- and it's good to see you again, John -- of Operation HOPE. He's what we call a social entrepreneur, by the way. (Laughter.) He has heard the call to help people like Shonelle realize her dreams -- said this: he said, "Shonelle would have been rejected. She wouldn't have been a home owner and she wouldn't have been a business owner." That's what John said. And so the fair standards are important. The national standard was an important act that you all did, and I want to thank you for working on it in 1996. (Applause.)

See, the bill I sign today will make the national fair credit standards permanent. Those standards were set to expire, the '96 -- the good of the '96 act was going away. And then the Congress stepped up and acted for the sake of the Shonelles of the world. And now the credit standards are a permanent part of the legislative history of the country. And I want to thank you for that. It's the right thing to do, and I appreciate your leadership. See, we're ensuring that lenders make decisions based upon the full and fair credit histories of each person, and not on the categories that can lead to discrimination.

And as we help people can access to credit, we're strengthening the protections that help consumers build and keep a good credit history. That good record is ruined when criminals steal identities and run up purchases under stolen names. Like other forms of stealing, identity theft leaves the victim feeling terribly violated. And undoing the damage caused by identity theft can take months.

Michael Berry is with us today. Thank you for coming, Michael. In January of 2002, Michael was applying for a credit line increase. He'd always paid his bills in a timely manner. He's a good citizen. But his application was rejected. They told him that he had taken out too many credit cards recently. It came as quite a surprise to Michael, since it wasn't true. He discovered that someone had stolen his financial identity. He made countless calls to credit bureaus and tracked down credit card purchases he had not made. He even found the address of the person who had taken out the cards.

He closed the credit card accounts as fast as he could, but applications for more credit in his name were being made every day. And many were getting approved. He had to call every credit card company to get each card canceled before it was issued. Nearly two years later, Michael is still fighting the effects of the fraud. The system was broken. Michael is living testimony to what I'm saying when I said the system was broken. And Congress acted. I want to thank you all for stepping up and doing the right thing here.

See, in an age when information about individuals can be found easily, sold easily, abused easily, government must act to protect individual privacy. And with this new law, we're taking action. First, under this law, we're giving every consumer the right to get a copy of his or her credit report free of charge every year. That's important. The credit report is more than a record of past actions -- it has great influence over a person's financial future. People should be able to check their credit report for accuracy, and to challenge any errors. The bill does just that.

Second, this law will help prevent identity theft before it occurs, by requiring merchants to delete all but the last five digits of a credit card number on store receipts. Many restaurants and merchants have already adopted this practice. All will now do so.

Won't they, Tim? (Laughter.) Just making sure he was awake. (Laughter.)

THE PRESIDENT: Slips of paper that most people throw away should not hold the key to their savings and financial secrets.

Third, this law will create a national system of fraud detection so that identity theft can be traced and dealt with earlier. Up to now, victims of identity theft have been left to manage the problem themselves -- ask Michael -- by calling all their credit card companies to shut down each of their accounts. And then the victims must call each of the three major credit rating agencies to report the crime and to protect their credit rating. Under this legislation, victims will only have to make one phone call to receive advice and to set off a nationwide fraud alert. It's an important reform. I appreciate you all for putting this into law. Credit bureaus will then take immediate measures to protect the consumer's credit standing.

And fourth, this law will encourage lenders and credit agencies to take action before a victim even knows an identity crime has occurred. In many cases, identity thieves follow predictable patterns. Bank regulators working with credit agencies will draw up guidelines to identify these patterns and develop methods to stop identity theft before it ever happens.

These practical steps will help consumers protect their credit and their good name. People work hard to build up good credit histories, and rely on their credit to move forward in life. Today, we're helping to make our credit system fair, fair to all, and to better protect those -- better protect people from those who would abuse it.

I'm pleased to sign into law the Fair and Accurate Credit Transactions Act of 2003 -- a good, solid piece of legislation. (Applause.)