For Immediate Release
Office of the Press Secretary
December 4, 2003

THE PRESIDENT: Thank you all very much. Welcome to the Christmas Pageant of Peace. This evening, we continue a tradition in Washington as we gather to light the National Christmas Tree. Tonight, and throughout the Christmas season, our thoughts turn to a star in the east, seen 20 centuries ago, and to a light that can guide us still. Laura and I are so pleased to join you in this ceremony, and we thank you all for being here. 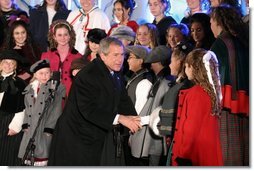 It's always good to see Santa. I know you've got a lot of commitments this time of year. (Laughter.) We also know how Santa gets around: he travels in the dark of night, he arrives unannounced -- (laughter) -- and he's gone before you know he was there. (Laughter.) Santa, I can assure you, it's a lot easier on a flying sled than it is on Air Force One. (Laughter and applause.)

I want to thank Father Kleinwebber for his gracious offering of prayer. I appreciate the musicians -- fantastic job tonight. Thank you all for coming. I want to thank the members of the board of the Christmas Pageant of Peace. I want to welcome all the children from the Boys and Girls Clubs from this region for being here.

Also with us this evening are military personnel -- (applause) -- including some who have recently returned from duty in Iraq and Afghanistan. (Applause.) I know your families are glad to have you back. They're proud of your service, and so is our country. On behalf of all Americans, welcome home, and job well done. (Applause.)

We also honor all of our fellow Americans serving far away from him during the holidays. Separation from loved ones is especially difficult this time of year. Our people in uniform can know that their families miss them and love them, that millions are praying for them, and that America is grateful for the men and women who serve and defend our country.

The story of Christmas is familiar to us all, and it still holds a sense of wonder and surprise. When the good news came first to a young woman from Nazareth, her response was understandable. She asked, how can this be? The news would bring difficulty to her family and suspicion upon herself. Yet, Mary gave her reply, "Be it unto me according to Thy word." The wait for a new king had been long, and the manner of his arrival was not as many had expected. The king's first cries were heard by shepherds and cattle. He was raised by a carpenter's son. 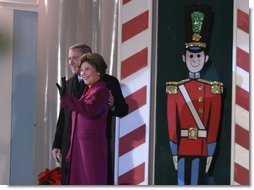 As we near Christmas in a time of war, these words bring comfort. We don't know all of God's ways, yet the Christmas story promises that God's purpose is justice, and His plan is peace. At times this belief is tested. During the Civil War, Longfellow wrote a poem that later became a part of a Christmas carol, "Hate is strong, and mocks the song of peace on earth, good will to men."

That poem also reminds us that hate is not the final word: "Then pealed the bells more loud and deep, 'God is not dead, nor doth He sleep, the wrong shall fail, the right prevail, with peace on earth, good will to men.'"

And now, as an expression of our own hope for peace in this Christmas season we light the national tree. Maggie Stuempfle and Andre Joyner are with us here. They're members of the Boys and Girls Clubs of America. Laura and I would like to ask Maggie and Andre to come up, and we'll turn on the lights. But I ask you all to join us in a national count down, starting with five, four, three, two, one. (Applause.)