For Immediate Release
Office of the First Lady
November 25, 2003


Washington, DC - On Friday, November 28, over 1.5 million Christmas cards bearing a Crawford, Texas postmark will be mailed to friends and family of President and Mrs. Bush, as well as foreign dignitaries. This year's official White House Christmas card was designed by artist Barbara Ernst Prey of Oyster Bay, New York, and depicts the Diplomatic Reception Room of the White House. 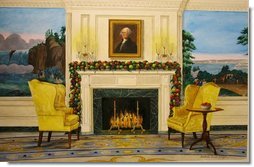 President and Mrs. Bush selected a Psalm and a message of peace for the message inside:

"You have granted me life and loving kindness; and your care has preserved my spirit. Job 10:12 (NASB)

May you celebrate the joys of faith, family and friendship this holiday season and always. 2003"

President and Mrs. Bush are very familiar with Prey's work - another one of her paintings is in their collection, on display in the Residence of the White House. The original watercolor painting for the Christmas card will be on display in the Booksellers area during the holiday season.

Born in New York, Barbara Ernst Prey graduated from Williams College, and earned a masters degree from Harvard University. She received a Fulbright Scholarship and a grant from the Henry Luce Foundation, enabling her to travel, study, work and exhibit extensively in Europe and Asia. While she absorbed many influences during her travels, she remained an American artist rooted in the traditions of Winslow Homer and Edward Hopper. Prey, who has been painting for over 30 years, currently lives in Oyster Bay, New York and claims Maine as a second home and source of inspiration, having painted and exhibited there for most of her career.

Barbara Ernst Prey is an artistic ambassador for her country. She was recently chosen to participate in the United States Arts in Embassies Program. Her monumental painting "Reunion at Dusk" is on view at the United States Embassy in Prague, hanging in the company of works by major American artists. More of her paintings, are on exhibition at the United States Embassy in Oslo. Barbara was invited by the State Department to give a lecture about her work to the cultural leaders in Prague, spear-heading a pilot program for the Arts in Embassies. As Robert Koshalek, Director of the Museum of Contemporary Art, Los Angeles writes, "This extraordinary program presents the very best work by the most innovative artists in the U.S. to an audience throughout the world. It has set a standard of quality which is recognized by the entire artistic community and is appreciated by the visitors to American Embassies worldwide." Other artists involved include Frank Stella, Jasper Johns, Roy Lichetenstein, Andy Warhol and Chuck Close.

Barbara was recently commissioned by NASA to do a painting of the International Space Station which is on exhibit at the Kennedy Space Center. In this endeavor, she joins an elite group of American artists who have been invited by NASA to document space history including Norman Rockwell and Robert Rauschenberg, Dr. H. Lester Cooke, former National Gallery of Art Curator who guided the NASA Arts Program comments, "future generations will realize that we have not only the scientists and engineers capable of shaping the destiny of our age but artists worthy to keep them company." The New York Times recently featured Prey and the NASA commission in their "Public Lives" section "Painting a Still Life that Moves at 17,000 M.P.H.". NASA has again commissioned her to do a painting to commemorate the anniversary of the loss of the Columbia shuttle.

Besides The New York Times Barbara has been featured in a documentary on PBS, Newsday, The Daily News, The Robb Report, and The International Art Newspaper. Noted critic Charles Riley in his recent catalogue introduction writes, "Prey's new works are immense, lovingly rendered, long meditations that test her limits in densely worked, allover compositions alive from edge-to-edge with technical problems posed and powerfully solved...On this scale, at this extraordinarily lofty technical level, the significance of the achievement gradually dawns. With thirty years' experience in a career filled with internationally significant honors, commissions and exhibitions, Prey as a virtuoso recognizes the need to dynamically challenge herself."

Barbara's work is collected by prominent private, corporate, and museum collections around the world. Her paintings are included in public collections such as the Farnsworth Art Museum, Williams College Museum of Art, The Taiwan Museum of Art, the Henry Luce Foundation, and the Reader's Digest Collection. Her work is owned by private collectors including President and Mrs. George W. Bush, former President and Mrs. George Bush, Mr. and Mrs. Henry Luce III, Mr. and Mrs. S. Prosser Mellon, Dr. and Mrs. Jim Watson and Prince and Princess Johannes Lobkowicz. www.barbaraprey.com